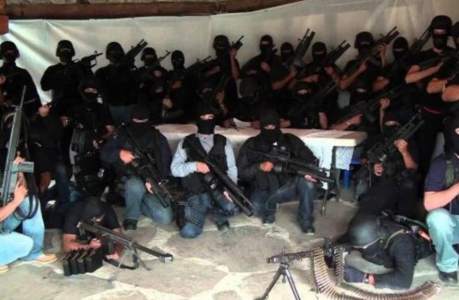 The Mexican state of Michoacán has become a war zone disputed by the powerful Jalisco Nueva Generación Cartel (CJNG), the most powerful criminal organization in that country.

For several months, the inhabitants of this state located three hours from the Mexican capital are caught in the crossfire of the security forces and the self-defense against the hit men of the cartel led by Nemesio Oseguera Cervantes, aka "El Mencho."

Dismembered bodies abandoned in the streets, beheaded or hanged on public roads bridges with threatening narcomantas are part of the warnings of the criminal organization that seeks to expand its operations to Michoacán.

The last event that horrified the Mexican population was the killing of 14 policemen last Tuesday, a massacre that the CJNG attributed to challenge the government of President Andrés Manuel López Obrador, experts say.

The State Prosecutor's Office said in a statement that the victims were part of a group of 41 police officers who, on board five patrols, were going to pick up a woman and her daughter to support them in the transfer before a judge in the region, for litigation of a family nature.

Murders
Mexico suffers a wave of violence and an increase in the majority of high and low impact crimes. According to the most recent data of the Executive Secretariat of Public Security, from January to August 2019 the country has recorded 23,063 murders

The authorities gathered various evidences in the town of El Aguaje, the attack zone, where two of the five patrols were burned when they were shot and fragmented grenades.

In the remaining patrols, the FGE found cards with missives in which the CJNG claimed responsibility for the attack and warned of new attacks against the security forces.

The governor of Michoacán, Silvano Aureoles, said that this attack in the dangerous region of Tierra Caliente will not go unpunished and evidenced the lack of coordination of the security areas of the federation, state and municipality.

According to information from the Attorney General's Office (FGR), Aguililla is the hometown of El Mencho, considered the most wanted drug traffickers by the governments of Mexico and the United States after the arrest and extradition of Joaquín 'El Chapo' Guzmán .

"It is a pulse to measure forces, a measurement of what one and the other may be capable of," Francisco Jiménez Reynoso, a researcher at the University of Guadalajara, told the BBC.

Drug trafficking
In Mexico, about 37 cartels and their respective criminal groups or gangs operate, mostly in drug production and transfer areas, where organizations such as the Jalisco New Generation Cartel, the Sinaloa Cartel, the Zetas and the Michoacan Family commit extortions, kidnappings and homicides.

This is not the first time that ‘El Mencho’ openly challenges the Government of Mexico. Already in 2015 he directed several attacks against the military, shot down a helicopter with missile launchers and carried out several ambushes against police officers.

‘El Mencho’ also captured media attention in 2015 by kidnapping two of Chapo Guzmán’s children, Iván Archivaldo and Jesús Alfredo, who were released after the mediation of the new head of the Sinaloa cartel, Ismael ‘El Mayo’ Zambada.

“They know that the violence will allow them to expand and that is exactly what they are doing,” estimates Mike Vigil, former head of international operations for the US Drug Enforcement Agency (DEA).

From farmer to bonnet

According to US authorities, Oseguera was born in Michoacán (west) on July 17, 1964. He spent several years helping his family in the cultivation of avocados and then emigrated to California, United States where he became involved in a distribution network. of heroin He was arrested in San Francisco drug distribution and then deported to Mexico, where he founded the CJNG.

In the shadow of the Sinaloa cartel, the CJNG dedicated itself to fuel theft, arms smuggling and other crimes.

However, after the arrest of Chapo Guzmán in 2014, ‘el Mencho’ took the opportunity to snatch some seats from the Sinaloa cartel.

Since then, the CJNG was growing rapidly. “The Jalisco cartel looked until 2013 as a franchise or branch of Sinaloa. What we see is that he managed to gain independence, ”said former Mexican intelligence agent Alejandro Hope.

“The cartel has extended its presence in surrounding regions and has built ties with criminal organizations in the United States, Latin America, Africa, Europe and Asia, according to information from the US Department of the Treasury.

"They are the fastest growing cartel and, if they continue at that rate, they will be even more powerful than the Sinaloa and Los Zetas cartel together," Vigil added.

The CJNG “is responsible for the traffic of tons of cocaine, methamphetamine and heroin with fentanyl to the United States, as well as violence and significant loss of life in Mexico,” added the DEA.

The US agency estimates that "El Mencho" has earned more than 1,000 million dollars with its criminal activities, a figure that would make it one of the richest criminals in the world.

The United States offers a $ 10 million reward for information on the whereabouts of the dangerous bonnet. For its part, the Mexican Government offers 30 million pesos, approximately 1.5 million dollars, for data that helps capture it.

After the extradition of Chapo, in January 2017, and his sentence to life imprisonment in the US, Oseguera Cervantes is considered the new “king” of the narco in Mexico, he has also been called the Pablo Escobar of the 21st century.

Obrador, who said there is no longer a war against drug trafficking in Mexico, said his administration is helping the authorities of the state of Michoacán to strengthen their security after the massacre of the police.

He stressed that they are going to address "the causes that cause this social decomposition."

However, the deployment of the National Guard, a militarized police force, shows that López Obrador's security strategy does not differ much from that of Felipe Calderón, the president who launched a military war against drug trafficking in 2006 that has triggered the figures of violence in the country.

The federal government's security strategy is reduced to two words: National Guard. This is putting military elements disguised as police officers throughout the territory. Nothing more, ”said Hope.

The most prominent difference from its predecessors is that this deployment no longer consists of specific operations but a permanent territorial presence, although the National Guard does not yet have enough elements.

The massacre of the police “demonstrates, on the one hand, the improvised decisions that have been taken in matters of public security by the civil areas of the Government, and on the other this way of ignoring or trying to ignore the open violence they exercise these groups, ”security expert Javier Oliva told Efe.

For the researcher at the National Autonomous University of Mexico (UNAM), although the strategy focused on the prevention of violence and attention to the causes promoted by López Obrador is positive, it is essential to strengthen municipal and state police. "As long as there is no thorough restructuring of the prison system at the state level and federal level, nor is there a clear decision to strengthen the accusatory criminal system, the efforts will continue to be dispersed and have little effect," he said.

According to the most recent data of the Executive Secretariat of Public Security, from January to August 2019 the country has registered 23,063 murders. Michoacán exemplifies this wave of violence, as 1,192 malicious homicides were recorded in the first eight months, and only 202 of them were in August, the most violent month of the year for this state, one of the poorest in the country.