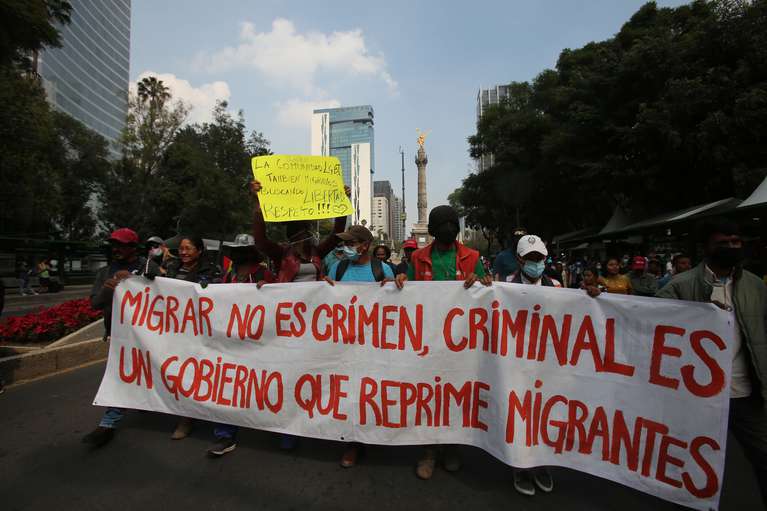 MEXICO CITY (AP) – About 100 migrants heading north on foot from the Guatemalan border gathered in Mexico City on Saturday to commemorate International Migrants Day and remember those who, like them, undertook the journey but died. on the journey.

Migrants gathered in front of a makeshift monument dedicated to the victims of the massacre of 72 migrants that the Los Zetas drug cartel perpetrated in 2010 in the northern Mexican state of Tamaulipas. The monument was installed on one side of the main avenue in the city center, near the United States embassy.

The protesters erected a plaque with the phrase “Migration is a human right.” Many of the group began their march in late October from the Mexican city of Tapachula, on the country’s southern border, after the government prevented them from hitchhiking in other people’s vehicles.

The group also recalled the 56 migrants who perished in a horrible traffic accident last week in the southern state of Chiapas. Some corpses of the victims are expected to be transported to Guatemala over the weekend.

In a statement on the occasion of this special day, a coalition of groups representing relatives of Central American migrants who have disappeared in Mexico described 2021 as “a year of setbacks.”

The year began with a massacre in January of 19 people, including 16 Guatemalan migrants, in the northern state of Tamaulipas. Twelve state troopers face charges for those deaths.

In the midst of the Mexican government’s actions to prevent the formation of new migrant caravans, on December 9 a cargo truck with a trailer full of people overturned.

“These are the most visible tragedies of 2021, but we must not forget that the tragedy that migrants experience is painfully daily and often silent: disappearance, execution, extortion, rape, torture, are some of the many humiliations and violations of their human rights, ”the groups wrote.

“In an effort to contain migration to the United States, the government of that country, as well as those of Mexico, Honduras, Guatemala, El Salvador and other Latin American countries are hardening and militarizing migration policies, without measuring the human cost of these measures. ”They added.

The Mexican government has tried to appease the United States by halting the caravans of foot migrants and allowing the “Stay in Mexico” policy to resume.

But Mexico has been unable to stop the many migrants crammed into cargo trucks by the hundreds and charged thousands of dollars by human traffickers to take them to the US border, journeys that often turn deadly.