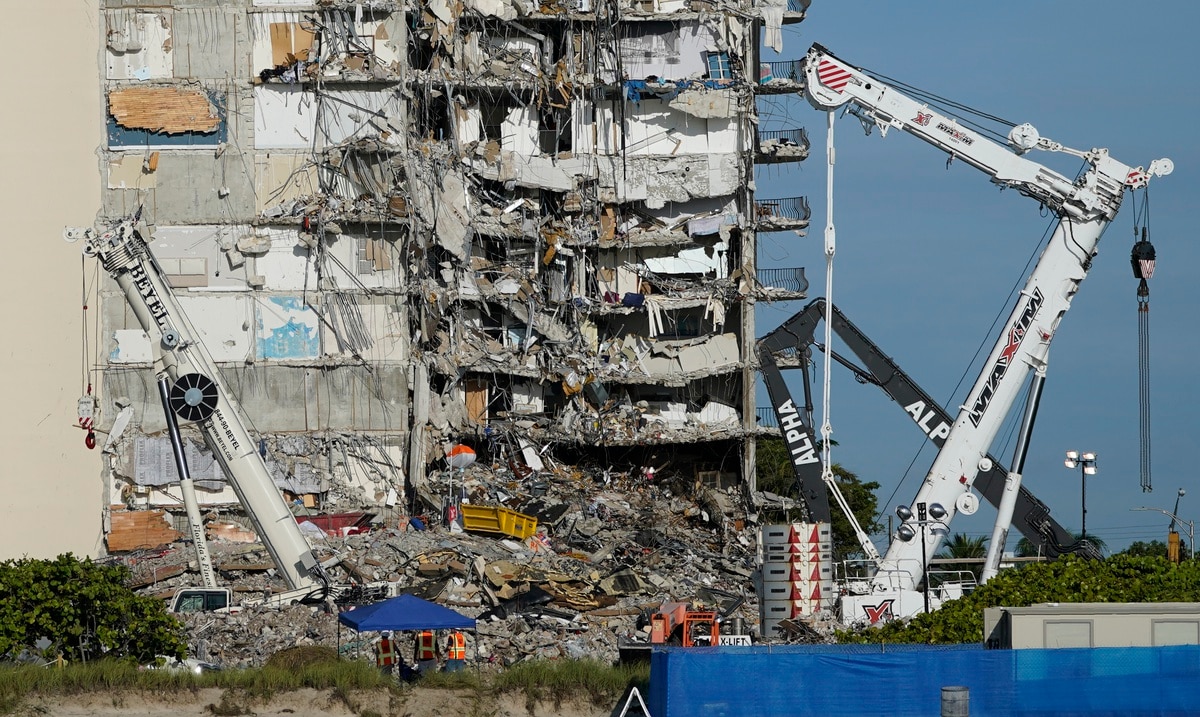 The search and rescue mission, as well as debris clearance, in the area of ​​a condominium collapse in Surfside, Miami, was suspended today, Thursday, due to concerns about the risk of collapse of the building that still stands as part of the complex. Champlain Towers South.

According to the Miami Fire Department, there is a large column in the building that has moved six to 12 inches and could collapse, in turn affecting the supporting columns of the structure.

“We have serious stability concerns. We had to suspend the mission for the morning due to structural concern with the building still standing. We do our best to protect the safety of our first responders, ”said Miami-Dade Mayor Daniella Levine Cava at a news conference.

Rescue work is suspended from 2:11 am today.

Meanwhile, the Fire Department explained that, in addition to the indicated column, a slight movement was identified in the concrete floor at the rear of the building that could cause an additional failure in the structure, as well as movements on the rubble adjacent to the back of the frame.

“Engineers are evaluating the next steps. We have already notified the relatives who are still waiting this morning and have answered all their questions. We will continue to serve the press as the information evolves, “added the mayor.

At the moment, the number of fatalities remains at 18 and missing persons number 145.

The suspension of work occurs the same day that President Joe Biden arrived in Miami with the First Lady, Jill Biden, to spend the day with relatives of the fatal victims of the collapse and missing persons, as well as with first responders.

However, Levine Cava denied that the suspension of the rescue mission was due to the arrival of the president.

“The suspension of work has no impact whatsoever due to the arrival of President Biden. Our concern is for the safety and life of our rescuers before the recommendations of the engineers ”, he said.

Miami-Dade Police Director Freddy Ramirez said he hopes Biden’s visit will be a morale booster for the entire community.

“We have had several challenges due to the weather, the sadness, the pain. And I think the president will bring some unity here for our community, support, as our governor, our mayor, all together, “he said.

The rescue mission and search for people among the rubble reached 36 uninterrupted hours today since the emergency began. (Fernando Medina) The Champlain Towers condominium, built in 1980, partially collapsed yesterday, Thursday, in circumstances that are not yet determined. (Fernando Medina) At the edge of noon on Friday, there were four confirmed deaths from this tragedy and 159 people remained missing. (Fernando Medina) Relatives, friends and neighbors close to the place came to the beach near the structure to witness the search mission. (Fernando Medina) Testimonies from people who survived the tragedy establish that a noise was heard before the collapse of the 12-story building. (Fernando Medina) The authorities reported that as of Friday at noon, only 120 people had been rescued. (Fernando Medina) Although it did not fully collapse, the end of the condominium that did not collapse was structurally compromised, so it will not be habitable. (Fernando Medina) Dozens of people remained at the scene during the search and rescue mission to pray for the missing. (Fernando Medina)