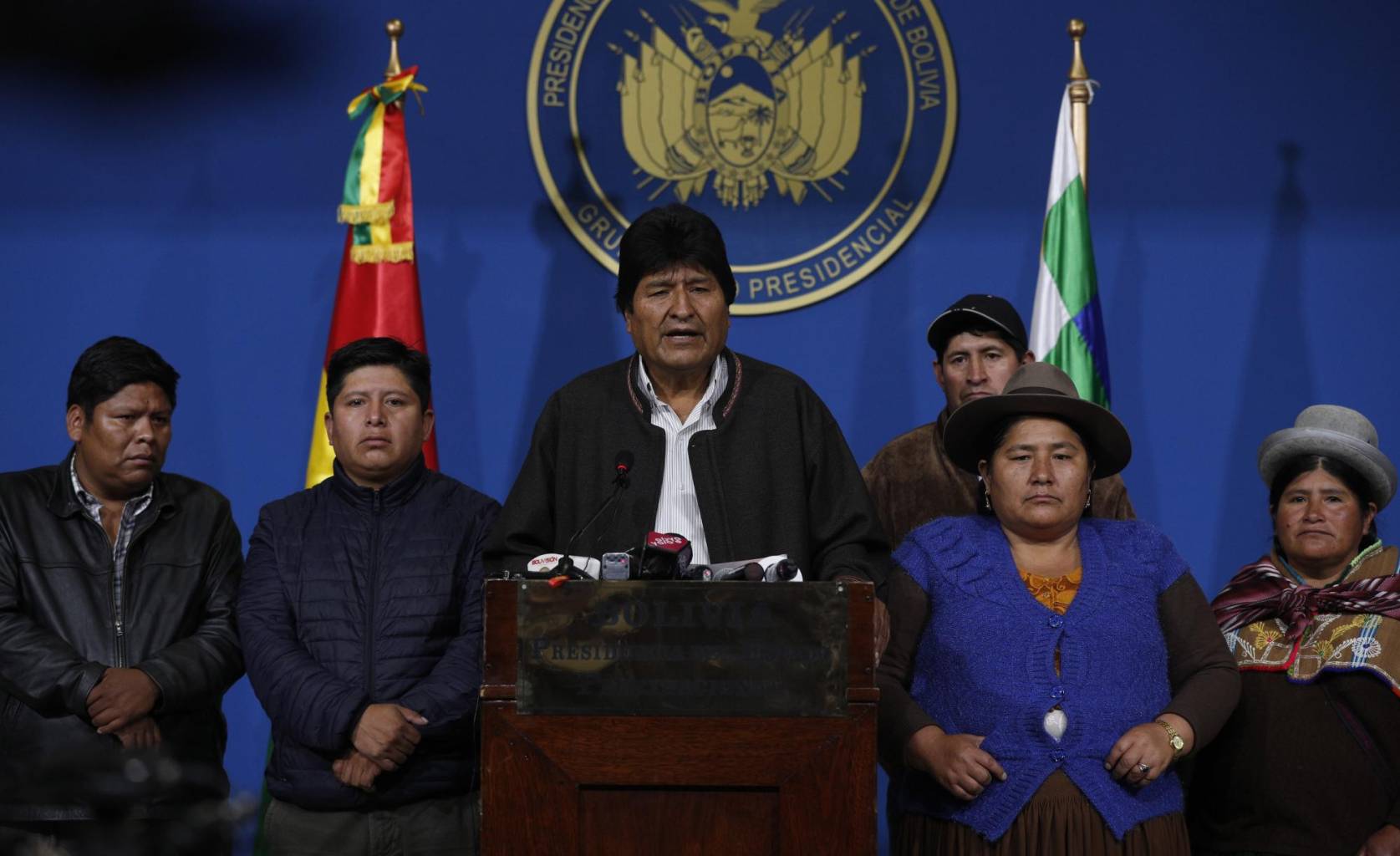 Bolivia entered a vacuum of power and political uncertainty on Monday after the resignation of President Evo Morales, under pressure from the Army and weeks of mass protests. They also waived all authorities called to succeed him, according to the constitution.

The situation was such that there was no date for the Legislative Assembly to meet, which was to elect Morales's successor. The president of that body and the presidents of the Senate and the Chamber of Deputies also resigned.

While people celebrated in the streets the resignation of Morales there were looting, assaults and attacks on private property, mainly in La Paz and the neighboring city of El Alto. Police had not normalized patrolling in the streets since he rioted against the government.

Morales ruled 13 years and 9 months and sought a fourth term, but allegations of fraud in the October 20 elections sparked weeks of protests. The Organization of American States (OAS) confirmed the irregularities after an electoral audit.

Near the presidential palace, a protester said he was celebrating that Bolivia was "free."

But others, including Morales himself, saw it as a return to the bleak era of coups led by Latin American armies that dominated the region for years. Morales only resigned after the head of the Army, General Williams Kaliman, asked him to resign to allow the restoration of peace and stability.

Morales had already accepted on Sunday the requests of the OAS to hold new elections given the “accumulation of irregularities observed” in the elections of October 20, whose official results gave Morales just the necessary votes to avoid a second round against a united opposition.

At first it was not clear who would succeed Morales or how his successor would be chosen.

At first there was no indication that the Army was maneuvering to take power, but "I think we have to look closely at what the Army does in the next few hours," said Jennifer Cyr, associate professor of political science and Latin American studies at the University of Arizona. "Are they overreaching in their work?"

"The power vacuum leaves an open space in which the Army could enter," he said.

Morales was the first indigenous to govern Bolivia, and brought unusual stability and economic progress, helping to reduce poverty and inequality in the impoverished country. It is still very popular among many Bolivians. The president's supporters have clashed with opposition protesters in riots after the October elections.

At nightfall, tensions were reported in La Paz and the neighboring city of El Alto, with news of looting and fire in homes and public properties.

The leadership crisis had escalated in the hours before Morales resigned. Two government ministers responsible for mines and hydrocarbons, the president of the Chamber of Deputies and three other pro-government legislators announced their resignations. Some said opposition supporters had threatened their families.

The head of the Supreme Electoral Tribunal, María Eugenia Choque, also resigned after the publication of the OAS report. The attorney general's office said it would investigate the judges of the court for possible fraud and police later said that Choque had been arrested, along with 37 other senior officials, for suspected electoral crimes.

Morales, who was unaccounted for, went to Twitter on Sunday to claim that the authorities intended to arrest him, although police general Yuri Calderón denied there was an arrest warrant against him.

“I denounce to the world and the Bolivian people that a police officer publicly announced that he is instructed to execute an illegal arrest warrant against me; likewise, violent groups assaulted my home. The coup destroys the rule of law, ”Morales said in his tweet.

Armed intruders raided the house of Morales in Cochabamba.

The Mexican government reported on Sunday that 20 members of the Bolivian executive and legislative branches were isolated at its headquarters in La Paz.

The Mexican Foreign Secretary, Marcelo Ebrard, said on Twitter that Mexico would offer Morales asylum if he asked for it, although there was no indication that he had done so.

Morales was elected in 2006 and led an economic boom driven by raw materials in the poorest country in South America. The former leader of a coca growers' union paved roads, sent Bolivia's first satellite into space and fought inflation.

But even many of his followers began to fear his resistance to leaving power.

He appeared for the fourth time in the elections after refusing to comply with the results of a referendum that supported the president's term of office, restrictions repealed by a high court that critics said was vitiated in his favor.

After the elections of October 20, Morales declared himself the winner despite the official results showing that he barely had enough support to avoid a second round against former president and opposition leader Carlos Mesa. A 24-hour break in the publication of the count stoked suspicions of electoral adjustment.

The government accepted a UEA team sent to review the elections, and that commission asked to hold new elections with a new electoral tribunal.

"Attentive to the accumulation of irregularities observed, it is not possible to guarantee the integrity of the data and give certainty of the results," the experts said in a statement.

The United States Department of State issued a statement asking the OAS to send a delegation to Bolivia to oversee the electoral process. "The Bolivian people deserve free and fair elections," he said.

The state news agency ABI said Morales had announced his resignation from the province of Chapare, where he began his career as a union leader. At the end of his speech he said he would return to Chapare.