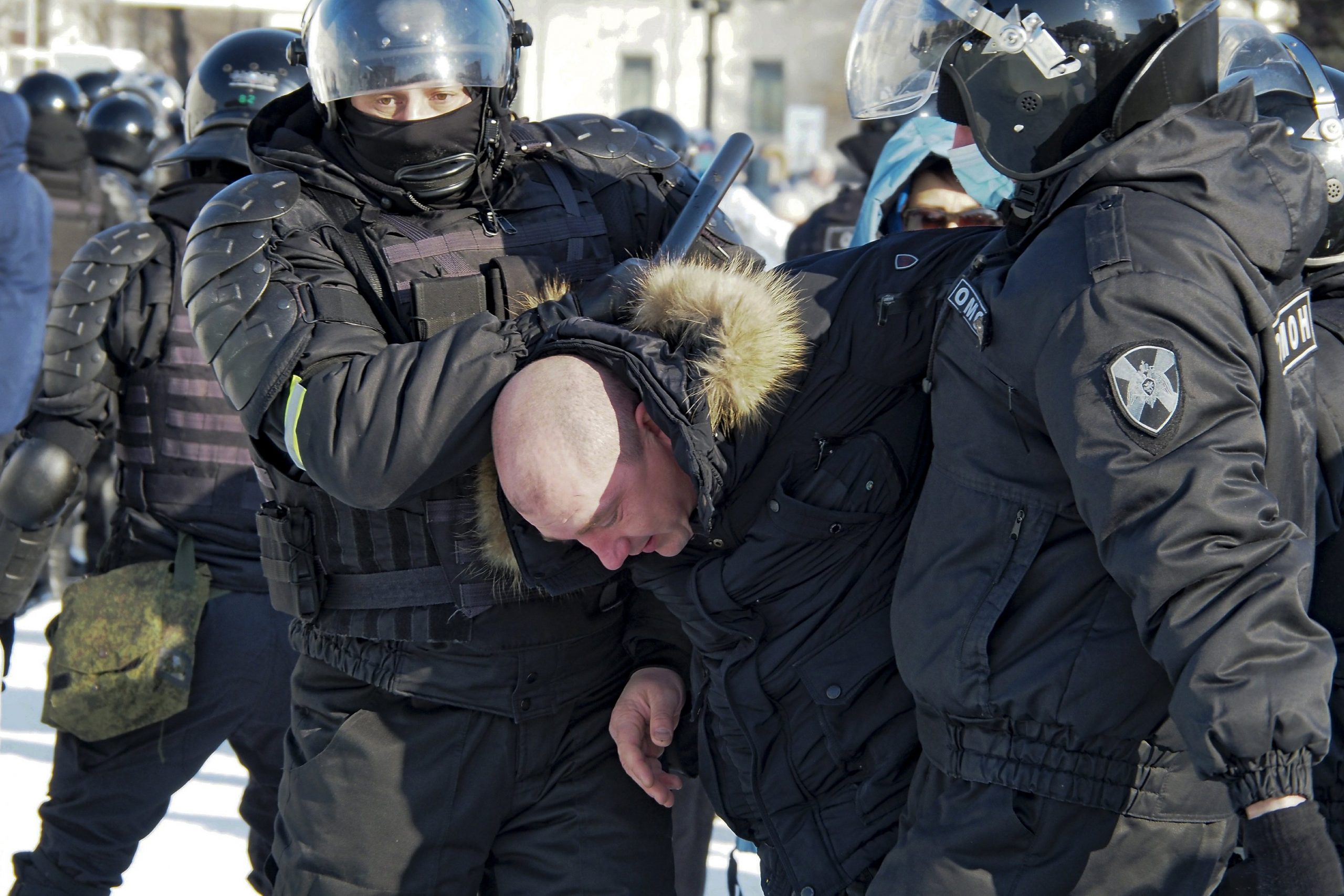 MOSCOW (AP) – Russian police arrested more than 3,000 protesters across the country on Saturday during protests demanding the release of top opposition leader Alexei Navalny, reported a group that keeps a tally of political arrests.

Protests in at least 90 cities amid freezing temperatures that plummeted to -50 Celsius (-58 F) highlighted just how much Navalny’s influence has grown outside the political and cultural centers of Moscow and St. Petersburg.

In Moscow, some 15,000 protesters gathered in and around Pushkin Square, where clashes with the police broke out and many participants were dragged by riot police into detention buses and vans. Some were beaten with batons.

Navalny’s wife, Yulia, was among those arrested.

The police eventually pulled the protesters out of the square. Thousands of them then regrouped along a boulevard a kilometer away, many of them throwing snowballs at the police, before dispersing.

Some later came to protest outside the prison where Navalny is being held. Police arrested several people there.

“The situation is getting worse and worse, it is total anarchy,” said Andrei Gorkyov, a protester in Moscow. “And if we keep quiet, it will go on forever.”

The OVD-Info group that monitors political arrests said at least 1,167 people were detained in Moscow on Saturday and more than 460 in another large demonstration in St. Petersburg.

In all, he said 3,068 people had been arrested in about 90 cities, updating his previous report count of 3,445. The group offered no explanations for the reduction in the figure, while the Russian police did not provide arrest figures.

Resolute, Navalny supporters called for another protest next weekend.

Navalny, the most prominent and enduring critic of President Vladimir Putin, was arrested on January 17 as soon as he returned to Moscow from Germany, where he spent five months recovering from severe poisoning with a nerve agent that many attribute to the Kremlin.

Russian authorities alleged that he was detained because his stay in Germany violated the terms of the suspended sentence in a criminal case Navalny describes as illegitimate.

In Moscow, thousands of people packed the central Pushkin Square, where clashes with the police broke out. Helmeted and riot control officers abruptly dragged protesters onto police buses and detention trucks. Others were beaten with batons.

In the end the police expelled the protesters from the square. Then, thousands of people regrouped along a wide boulevard about a kilometer (half a mile) away, many of them throwing snowballs at police.

The protests spread across Russia’s vast territory, from the island city of Yuzhno-Sakhalinsk in northern Japan to the Siberian city of Yakutsk in eastern Siberia, where temperatures dropped to minus 50 degrees Celsius, to the cities. most populous European countries in Russia.

The 44-year-old activist is well known nationally for his allegations of corruption, claiming that it has flourished under President Putin.

The wide backing he enjoys puts the Kremlin in a strategic bind, risking further protests and criticism from the West if he is kept in custody, but apparently unwilling to back down and release him.

Navalny is due to appear for a court hearing in early February to determine if his sentence in the criminal fraud and money laundering case, which Navalny says was politically motivated, turns into three and a half years behind bars.

Moscow police arrested three top Navalny associates on Thursday, two of whom were later jailed for nine and 10 days.

Navalny fell into a coma while aboard a domestic flight from Siberia to Moscow on August 20. He was transferred from a hospital in Siberia to a hospital in Berlin two days later. Laboratories in Germany, France and Sweden, and tests conducted by the Organization for the Prohibition of Chemical Weapons, established that he was exposed to the Soviet-era nerve agent Novichok.