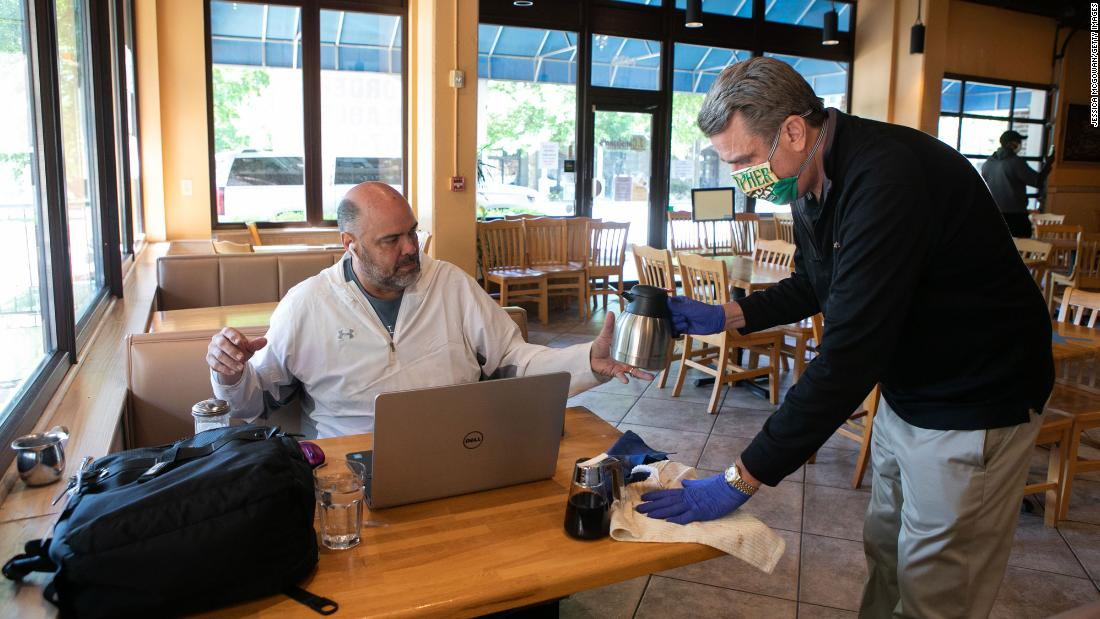 (CNN) – More than half of the states in the United States will begin to partially reopen at the end of the week, when the confinement orders of many states expire.

Governors across the country have been announcing whether they will gradually reopen their states when many of their confinement orders expire this week or whether they will wait a few more weeks. At least 28 states will have relaxed coronavirus restrictions by Friday.

There are more than one million reported cases of coronavirus in the United States and at least 60,966 deaths.

Bush and Obama, presidents who did warn of pandemics 6:30

Florida is among the states that will soon reopen. Its restaurants and retail stores can allow customers to enter, at reduced capacity, starting Monday. The change in restrictions will not apply to Broward, Miami-Dade and Palm Beach counties, where some 6 million people live.

“These counties have seen most of the pandemic, but are trending positively,” said Governor Ron DeSantis. “We are working with them and I think they will be able to go to phase one very soon.”

West Virginia will allow dentists to return to work on Thursday. Restaurants, churches and professional services, such as beauty salons, can open Monday, with restrictions, said Governor Jim Justice.

But other states will wait longer.

Arizona Governor Doug Ducey announced at a press conference that he had extended the state’s confinement order until May 15. And while California has a plan for a gradual reopening, the state does not have a fixed end date for its confinement order, and Governor Gavin Newsom said the reopening of schools and businesses is still “weeks away.”

In this March 2020 photo provided by Gilead Sciences, a vial of the investigational drug remdesivir is visually inspected at a Gilead manufacturing site. (Gilead Sciences via AP)

The United States Food and Drug Administration (FDA) plans to announce an emergency authorization for the use of an investigational coronavirus treatment, remdesivir, The New York Times reported, citing a senior government official.

The FDA said in a statement to CNN on Wednesday that it is in talks with Gilead Sciences, the maker of remdesivir, about making the drug available to patients. Gilead’s current supply of the drug could cover at least 140,000 ongoing treatments for coronavirus patients, Chief Executive Daniel O’Day said Wednesday.

This is how remdesivir worked in a patient with covid-19 1:24

“The data shows that remdesivir has a clear, significant and positive effect in decreasing recovery time,” Fauci said in the Oval Office during a meeting with President and Louisiana G John Bel Edwards.

But the researcher behind that trial told CNN that remdesivir “is not the end of the story” when it comes to treatment for the virus.

“We have work to do. We are looking for other therapies, this trial will continue, ”said Dr. Andre Kalil, principal investigator of the clinical trial, which was sponsored by the National Institutes of Health. “In medicine, it never ends. We can always do better. And we want to do better. “

Health experts have said states should step up tests for coronaviruses to reopen safely.

Washington Governor Jay Inslee referenced the evidence Wednesday when he announced that the state’s order to stay home would remain in effect on May 4. Inslee said the state cannot reach its full potential of 22,000 tests per day.

“Unfortunately, because we have no additional swabs in the viral transfer media … we can only do around 4,600 tests,” he said.

A member of the Los Angeles Fire Department asks a man to cough on his arm as part of the coronavirus tests.

The state outbreak is disproportionately affecting the Hispanic community, which represents 13% of the population but represents 30% of coronavirus cases, Inslee said.

Meanwhile, Los Angeles began offering free coronavirus testing Wednesday night to all residents, Mayor Eric Garcetti said at a press conference. Los Angeles is now the first major city in the United States to make that offer to its residents.

There is no limit to the number of times an individual can request a test, and although symptomatic people are the top priority, people who do not have symptoms can have those tests.

Garcetti initially said at the press conference that the trial would be open only to city residents, but according to a press release and the city’s website, all Los Angeles County residents can sign up for a free trial.

“We have the capacity, so don’t wait, don’t wander around and don’t risk infecting others,” Garcetti said. “If you feel like you need proof, take it. If you want to be sure, make yourself one. ”

There are 34 test sites throughout the city and Los Angeles County, with the capacity to screen 18,000 people per day. According to Garcetti, more than 140,000 people have been tested at those test sites.

A second wave is “inevitable”

How the country responds to this coronavirus wave will determine how bad the “inevitable” second wave will be, Fauci said.

Second wave of covid-19 could come if measures are not followed 1:00

CNN medical analyst Dr. Celine Gounder said Tuesday that before it is safe to list social distancing restrictions, states should see a 14-day decrease in cases and deaths, hospital capacity for expected patients and the ability to test and track contacts.

A University of Iowa study recommended keeping mitigation efforts for another two weeks to prevent another wave of infections.