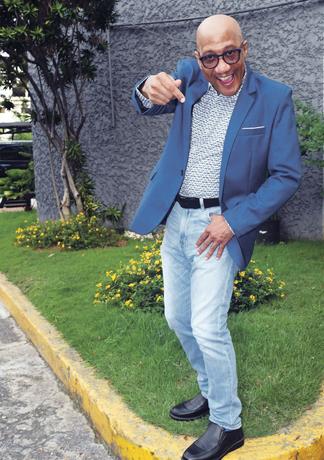 “I can't ask life more. I come from extreme poverty where dinner was lemon juice with cookies, and lunch was empty white rice, ”Dioni Fernández recalls recalling his beginnings in music.

Like all the merengueros of the time José Dionisio Fernández, name by which he was declared by his parents, did not live in opulence but did grow up in a family that watched over his education and instilled fear in God.

This belief was vital so that later on when he was a young man and was in the world of music, he would not fall into vices. He was born in Villa Francisca. in 1952, and is the eldest of nine brothers. At age 13 his family moved to the Los Mina sector (east of the capital) due to the clashes that arose in the April 1965 War.

It is there where he knows the magic of music, thanks to a teacher from the Iris del Valle school. When he returns from school – very hungry – he adds, he stopped in front of the Iris del Valle music school and “emboba” watching the students play. One day a teacher invited him to play a saxophone. Remember that first blow made him dizzy, but it was precisely that sound that he took from the instrument that reached his soul, and since then he could not take the music from his life anymore.

Dioni learned to play clarinet, guitar and piano, in the beginning, like every young musician, he went through rock, but it was in the orchestra of Félix del Rosario where he began to respect merengue as a musical genre.

“I come from a very humble, large family, where we learned to be very respectful. I feel very proud of my father because people speak wonders about him. That's how I want my children to remember me. May they be proud of the person who was their father. For me that is more important than the musical legacy I could have left. I left the misery but the education I received was vital to achieve success, ”he said.

On November 15, Dioni will be celebrating 40 years of artistic career at Hard Rock Live in Blue Mall. His appearance in the 80s with the group "The Team of Dioni Fernández", was vital and of great value for Dominican music , who had a harvest of the best merengue performers.

His passage through music

With the group Los Magos del Ritmo by Félix del Rosario, Dioni remained three years as a pianist. Then he decides to stay in Curacao leading a group but a few months later he was called by the late talent creator Rafael-Cholo-Brenes, to be part of Los Hijos del Rey, (1978) one of Wilfrido Vargas's satellite groups. “It was a mega group, which connected with the youth of the time, with Fernando Villalona and Raulín Rosendo,” recalls the teacher.

With the breakup of Wilfrido Vargas and Cholo Brenes, Dioni stays with Cholo and they create the group with Sandy Reyes, and that is where the name of “The Team of Sandy Reyes and Dioni Fernández” arises. This meeting did not last long and within a few months they split. A year later, "Dioni Fernández y El Equipo" was born, a name he inherited from Yaqui Núñez. With this group there was a success story that included Charlie Rodríguez, Sergio Vargas, Diiódes Núñez, Pablo Martínez, Eddy Rafael, Benny Sadel, Willie González, Kaki Vargas, Orbis García, Reynold Sosa and Carlos David among others. Dioni recorded 13 record productions and achieved dozens of musical successes.

MUSIC
Discography.
“Sandy, Dioni and The Team”
“Dioni Fernández and The Team”
"The designers"
“Party and party”
"Life moves on"
"For retaining you"
“Tight”
"I am for you"
“Tribute to Julito Deschamps”
"The cold drop"
"Strange Loves"
"Together again"

Recordings “The public is the true owner of our work because they are the recipient where what we do is consumed. That is why when they tell me that I must record with a new sound, I refuse to do it because in these times they are other codes that we no longer handle because the public demands other things. ”