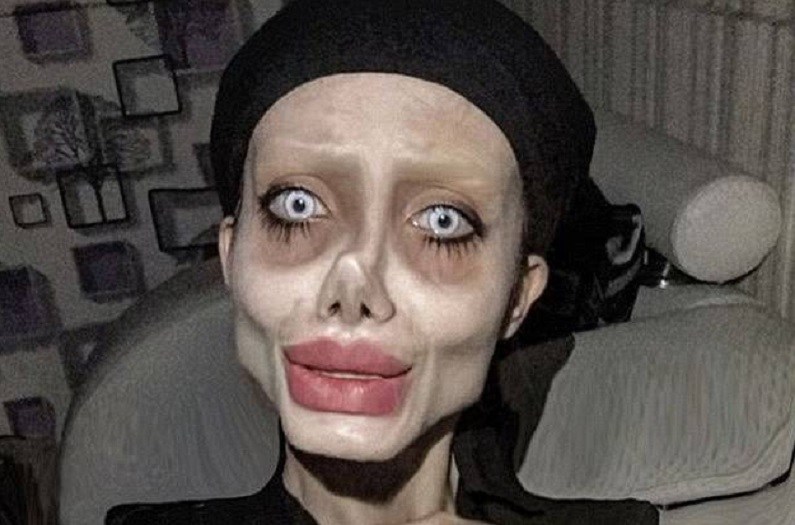 During a conversation with a local media, Sahar Tabar also talked about his relationship with social networks and how the publications impacted his life

Sahar Tabar is an Iranian woman who took worldwide relevance in social networks due to her physical appearance, which she supposedly managed after undergoing multiple cosmetic surgeries. While in the media they have established a similarity between her and actress Angelina Jolie, other people have compared her to a "zombie."

At the beginning of the month Tabar's arrest for the crime of blasphemy had been announced, but now he has returned to the center of attention due to an interview he gave to a television channel in Iran (IRTV2), where He talked about his relationship with social networks and how they modified his life.

During the conversation, the 22-year-old woman explained that people's acceptance of the publications she made was one of the elements that prompted her to continue uploading the type of content related to her appearance.

"My childhood dream was to be famous," Tabar said in the talk. "I saw that people were following what they were doing and, when the likes began to grow, I felt I was doing the right thing."

However, fame did not come in the best way, as this was a consequence of having published images of her with an altered appearance, which became evident thanks to the makeup and the edition she exercised on the photographs.

In the conversation, Tabar showed his regret, because he admitted that "the vulgarity in social networks receives many clicks" and that if he had not followed the path he chose, now "he would be in a better place."

In this regard, he talked about the relationship he had with people close to her, in addition to the little attention he put in his comments: “My mother asked me to stop, but I didn't listen to her. Sometimes, the words of a stranger or a friend can be more important than those of a father, ”said the woman with thousands of followers on social networks.

Sahar Tabar, who is the only daughter of a divorced couple, also explained that the purpose of her surgeries was not to look similar to Angelina Jolie's, as Western media has pointed out, rather, she pointed out perhaps with irony, she sought to resemble to the female character in the movie The Corpse of the Bride, by Tim Burton.

The controversy surrounding the interview

Through social networks users in Iran have shown their anger because the interview could be considered as part of a trial against the young woman.

These accusations by people found an argument in the fact that in the program, Tabar was presented as a "zombie" and an example of how "the madness of becoming famous on social networks has ruined a real life," they reported. international media

Therefore, some people issued calls in order not to transmit such confessions on television: “Showing it on television is shameful and dirty. She is a sick girl. Making him confess is embarrassing, ”said one user.

Despite the awkward moments she has lived through her posts on Instagram, the woman has denied having undergone more than 50 surgeries, as the British newspaper The Sun said at the end of 2017.

“I have had a nose job, I have raised my lips and I also had a liposuction. I don't see anything terrible in operations. Many people have this type of procedure on the entire planet, ”he defended himself long ago.