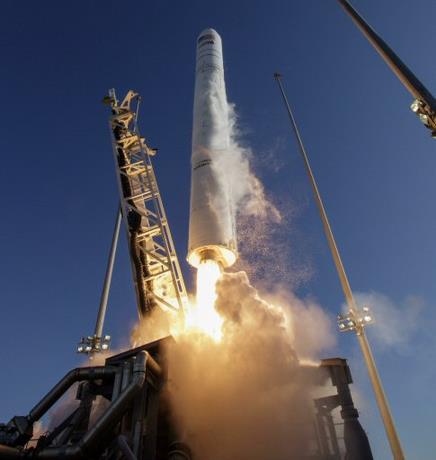 A cargo rocket took off on Saturday to the International Space Station, transporting sports car parts, a cookie oven and a vest to protect itself from radiation.

The Northrop Grumman company launched the Cygnus capsule for NASA from Wallops Island, Virginia. The shipment of 3,700 kilograms (8,200 pounds) should arrive at the orbital laboratory on Monday.

"Good launch in every way," said a ground controller.

Space station astronauts will test the oven by cooking chocolate chip cookies and put on the new safety vest to assess their comfort. Both experiments are considered as precursors to the voyages to the Moon and Mars.

Other equipment sent will be used for a series of spacewalks this month, which aims to repair a particle physics detector key. Placed outside the space station in 2011, the Magnetic Alpha spectrometer needs new cooling pumps to continue its tracking of elusive dark matter and antimatter.

The Italian firm Lamborghini also joined the expedition. He sent several samples of the carbon fiber he uses in his sports cars for six months of direct exposure in space. Researchers consider using the material for medical implants.

Like space, the interior of the human body can be an extreme environment, said Alessandro Grattoni of the Houston Methodist firm, which collaborates with Lamborghini in the experiment.

The nanomedicine specialist said Friday that he is constantly looking for new materials for devices that are inserted under the skin. Tiny implants release medications to treat cancer, hormonal deficiencies and other diseases.

The Northrop Grumman company, based in Virginia, simultaneously controls two Cygnus capsules in orbit for the first time. Named as the swan constellation, the Cygnus launched a few months ago now flies with complete independence from the space station 400 kilometers (250 miles) high, after concluding with its delivery of groceries.

At some point in the near future, it will be directed to a fiery re-entry, pulverizing itself in the atmosphere with everything and the garbage of the station it carries in it, according to company officials.