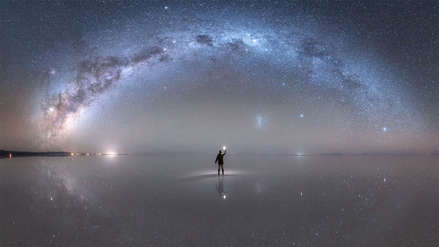 A pride for the Peruvian people. The young Jheison Huerta, born in Huaraz, has been the winner of an important recognition from NASA. The astrophotographer was awarded the Astronomy Picture of the Day on October 22 for his impressive photograph of the Milky Way. The image, titled "Night Sky Reflections from the World’s Largest Mirror" shows the beauty of our galaxy.

In an interview with Somos, the young man commented that the pho tograph in question was taken in the Salar de Uyuni, the natural landscape located in Bolivia, and was composed of 15 unique photographs that resulted in a panoramic shot. “For 3 years I have been trying to take this picture. Only on the third attempt I managed to find the ideal conditions, ”Huerta said during the interview.

The APOD award is a recognition given by NASA and the Michigan University of Technology to "a different image or photo of our universe, with a short explanation written by an official astronomer." The call is fully open to the public and Huerta is the first Peruvian to receive this achievement.

The compatriot shared the technical details of his equipment, among which a Canon 5D Mark IV Full Frame camera with a 16-35mm f2.8 lens stands out. In addition, the young man said that his next objective is to be able to capture a comet or solar eclipse in Ancash, Peru, in the Cordillera Blanca.