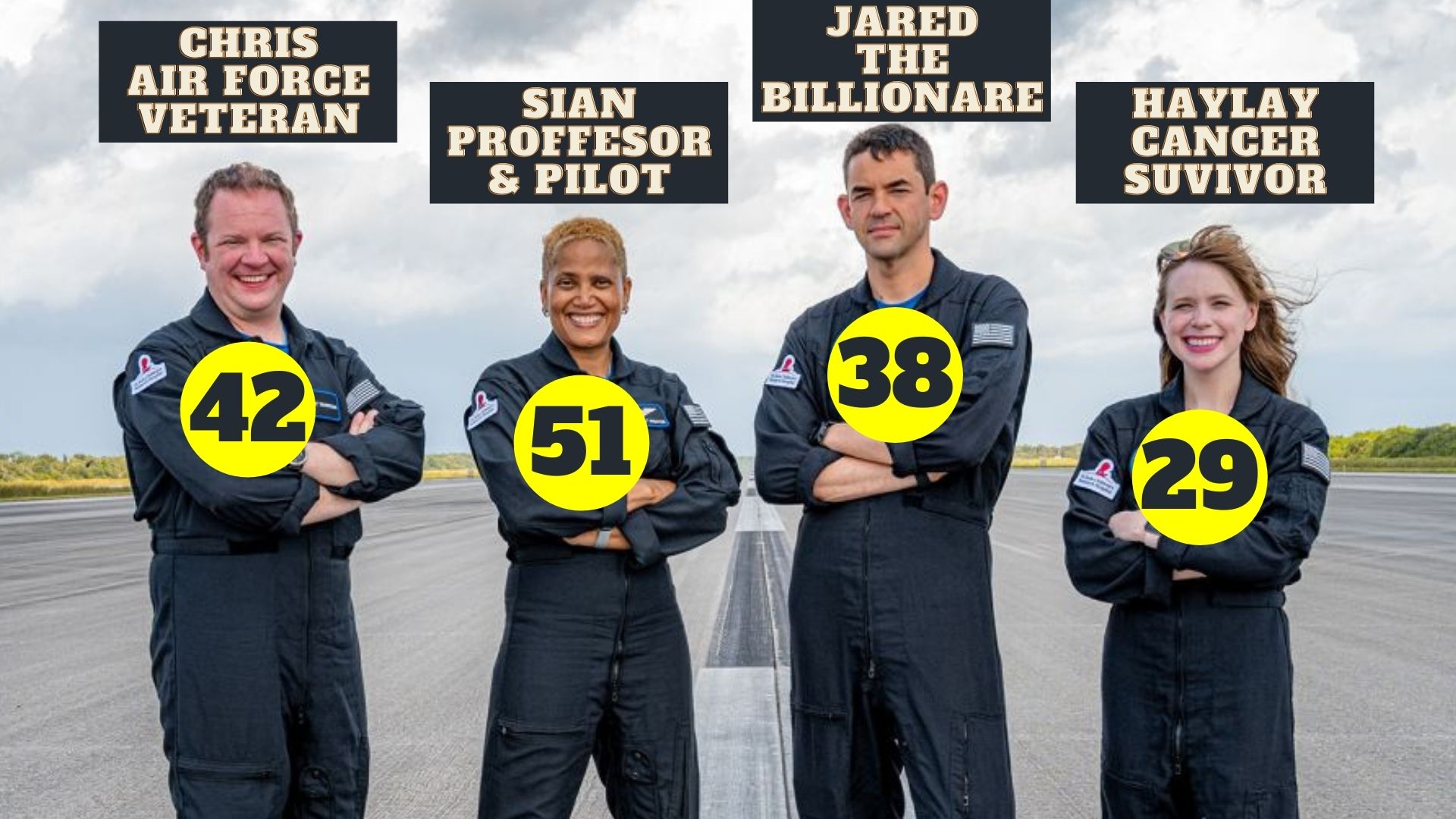 (WAB NEWS) – After Virgin Galactic and Blue Origin suborbital space trips, SpaceX is gearing up to go to space.

This Wednesday, four civilians will enter SpaceX’s 60-meter-tall spacecraft to fly past the speed of sound and reach 44,256 kilometers per hour until they reach space.

SpaceX’s Inspiration4 mission is scheduled to take off on September 15 between 8:02 p.m. and 1:02 a.m. (Eastern Time) from NASA’s Kennedy Space Center in Brevard County, Florida, although meteorologists are watching out for storms that could affect the mission.

SpaceX’s Dragon spacecraft will orbit planet Earth every 90 minutes along a custom flight path. After approximately three days in orbit and reaching a maximum height of 540 kilometers above Earth, Dragon will re-enter Earth’s atmosphere for a water landing off the coast of Florida.

Inspiration4 is far from being the first mission with civilians into space, since in 2001 the American billionaire Dennis Tito was the first to self-finance an eight-day trip on the International Space Station (ISS) – along with six other people – through a Russian Soyuz rocket. However, this mission has been heralded as the beginning of a new era of space travel for ordinary people.

“The goal of Inspiration4 is to inspire humanity to support St. Jude here on Earth while simultaneously seeing new possibilities for manned spaceflight,” said Jared Isaacman, founder and CEO of Shift4 Payments, in a statement from SpaceX Isaacman is financing the multi-million dollar trip to space aboard a SpaceX Crew Dragon capsule, which could be the first orbital flight fully manned by non-astronauts.

“Each of these outstanding crew members embodies the best of humanity, and I am honored to guide them on this historic and purposeful mission and adventure of a lifetime,” said Isaacman.

Isaacman indicated that this mission, called Inspiration4, with the “4” referring to the number of crew members, “is the realization of a lifelong dream and a step towards a future in which anyone can venture and explore. the stars”.

The Shift4 Payments CEO said he wanted the mission to also mark a “historic moment to inspire humanity while helping fight childhood cancer,” and pledged to donate US $ 100 million to the hospital as part of an effort to raise US $ 200 million more for investigative work.

Who are the crew

In addition to Isaacman, Hayley Arceneaux, 29, a cancer survivor and physician assistant at St. Jude Children’s Hospital in Tennessee, is also on the crew. Arceneaux will become the youngest American to visit space and the first person with a prosthesis to travel to space.

“Until this mission, astronauts had to be physically perfect and now things are changing,” Arceneaux said. “It’s just amazing for the performance and to be able to show cancer patients what is possible.”

Why did Jeff Bezos go into space and return within a few minutes?

The other two confirmed seats will be occupied by Dr. Sian Proctor, professor of geosciences and specialist in scientific communication; and by Christopher Sembroski, advisor to the Space Camp educational camp and former US Air Force military man.

The Dragon ship has seating for up to seven passengers, so more people could join the trip. SpaceX CEO Elon Musk, who has previously expressed interest in joining a SpaceX mission, told reporters in early 2021 that he will not be on the Inspiration4 mission.

About the Dragon Crew

The Inspiration4 mission will make use of a SpaceX Crew Dragon capsule, the vehicle designed to transport NASA astronauts to and from the International Space Station (ISS), which made its first manned flights last year.

While the spacecraft is designed primarily for NASA use, the Crew Dragon remains the private property of SpaceX, allowing the company to sell seats on board to space tourists, private investigators, and anyone willing to pay the price. of approximately $ 50 million for a seat. Isaacman, who is paying for all four seats in Inspiration 4, has not said how much he paid for the mission.

The Crew Dragon spacecraft has the ability to carry seven passengers, to and from Earth orbit. The capsule has a height of 8.1 meters, a diameter of 4 meters and a load capacity of 165 kilograms, which will be distributed among the essential elements of the crew as well as the scientific team for research and microgravity experimentation.

The crew will conduct experiments designed to expand knowledge of the universe. “Inspiration4 is committed to allocating the maximum possible mass to this valuable research, providing access to space for inspiring projects that would otherwise be unable to overcome the high barriers of traditional space-based research,” reads the website of The mission.

How dangerous is the trip?

Every time a spacecraft leaves Earth, there are risks and there are no perfect measurements to predict them.

But NASA estimates that the Crew Dragon has a 1 in 270 chance of failing catastrophically, according to a metric the space agency uses. For comparison, NASA’s space shuttle missions in the 1980s through the early 2000s eventually saw a failure rate of about 1 in 68 missions.

Due to the inherent risks of blowing up a spacecraft at more than 17,000 miles per hour – the speed that allows an object to enter Earth’s orbit – Inspiration4 is a more dangerous mission than the brief up-and-down suborbital walks undertaken. by billionaires Jeff Bezos and Richard Branson.

In addition to the many dangers of the launch itself, in which rockets essentially use controlled explosions more powerful than most war bombs to build up enough velocity to move away from gravity, there is also the process of reentry. Upon returning from orbit, the Crew Dragon’s external temperatures can reach up to 1,926 degrees Celsius, and astronauts will experience 4.5 Gs of force pushing them into their seats, all as the increasingly thick atmosphere crashes into the capsule.

During the Netflix documentary on the Inspiration4 mission, Musk described a capsule going through reentry as “like a flaming meteor entering”.  After that, the Crew Dragon has to deploy a parachute to slow its descent and make a safe landing in the ocean before the rescue boats can carry the four passengers back to dry land.

Despite the risks, a former NASA chief and professional safety officials have said the Crew Dragon is probably the safest crewed vehicle ever flown.

Written with information from Jackie Wattles.