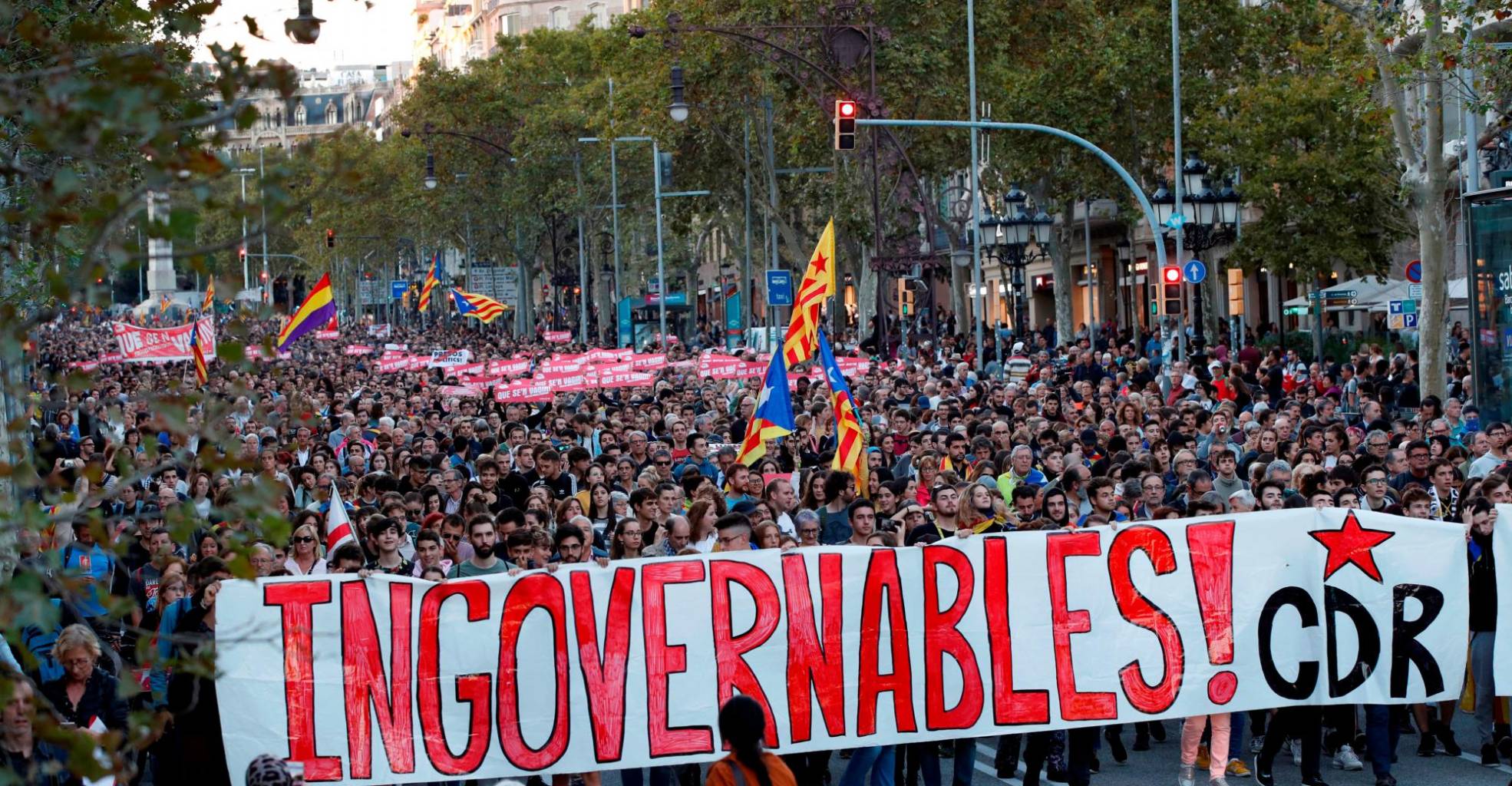 The Spanish region of Catalonia lived on Wednesday a new day of protests, with radical independence groups burning containers and mounting barricades in the main capitals of that autonomous community.

Meanwhile, the Spanish Government intensified contacts with the different political forces and requested the condemnation of those acts, hours before the regional president attributed them to "infiltrators" and demanded their immediate cessation.

At least twenty people were arrested today in various parts of Catalonia for their alleged relationship with violent acts in the context of the different concentrations and demonstrations against the ruling of the Supreme Court of Spain that sentenced Monday to sentences of 9 to 13 years of jail for sedition and embezzlement of several independence leaders, according to the Mossos d'Esquadra (regional police force).

In addition, 41 people were injured, two of them seriously, in the protests of this day, reported the Emergency Medical System (SEM).

In a press conference after meeting with the main parties with parliamentary representation, the head of the Spanish Executive, the socialist Pedro Sanchez, demanded that the president of the regional government, the independentist Quim Torra, condemn the violent acts.

Sanchez rejected the application of article 155 of the Constitution, which would mean the loss of regional self-government, or the National Security Law, approved by the Socialist Party and the Popular Party (PP, conservative) in 2015, which offers the Government “functional authority "To direct the actions that proceed" in matters of security and public order "in a situation of interest to the nation.

According to him, "it is very important that the violent and those who protect or pull them, even if it is by word," face "moderation" in response, since their hope is that the Government will enter into their "provocations."

In reference to Torra, Sánchez said that no ruler "can hide his failure with curtains of smoke and fire" and reminded him that he has a "moral and political" duty to stop the altercations.

As part of what has been called "marches for freedom," however, the Catalan regional president joined the route that, starting from different points in Catalonia, independence began today in various columns on roads with the aim of converging in Barcelona next Friday, when independence unions have called a general strike.

After midnight (22.00 GMT), Quim Torra appeared on regional television to call for “serenity” and “stop right now” the acts of vandalism to prevent incidents from damaging the image of independence, while warning about "Groups of infiltrators and provocateurs" in the riots.

“This must be stopped right now. There is no reason or justification for a vandalism (…). “We must not fall into the trap they put us … We will not tolerate provocations ”by a few, the president of Catalonia snapped.

The call of the so-called Defense Committees of the Republic (CDR) brought together some 22,000 people in the afternoon in the streets of Barcelona, ​​but some protesters later went to the Interior Ministry, where they threw blunt objects, such as stones and bottles, and threw toilet paper at the agents stationed around the building, which they charged against the rioters.

After this police response, several hundred young people dispersed through the streets near the counseling, lit bonfires and built barricades.

They also overturned motorcycles and set fire to garbage containers, which burned cars parked in the vicinity, which repeated fire scenes like those experienced the previous night.

THE OTHER PARTIES ASK FOR CONFUSENCE

Both the leader of the PP, Pablo Casado, and that of the Citizens (Liberals) party, Albert Rivera, today called on Sánchez to act now and forcefully.

Meanwhile, the secretary general of the leftist coalition United Podemos (UP), Pablo Iglesias, said he will support the Spanish Government in those measures that affect the "disinflammation" and was contrary to the "exceptional measures" posed by Casado and Rivera, So he urged Sanchez to say if he is with them or because of the dialogue.

The extreme right, represented by Vox, and which was not included in the meetings of the President of the Government with other formations, went further by considering that in the situation of “exceptional gravity” in Catalonia it is necessary to declare the State of emergency in that region .

Meanwhile, in the independentist bosom, the Interior Minister of the Catalan regional government, Miquel Buch, called for "isolating the violent" so as not to put the control of the Catalan autonomous police at risk.

Buch appeared in a press conference that was postponed, postponed and summoned several times throughout the day, and in which he speculated about his possible resignation, as requested by the radical groups that faced the regional police a few hours before.

Far from it, the Catalan politician condemned without palliative the violence of what he considered “minority groups” of “provocateurs and agitators”.