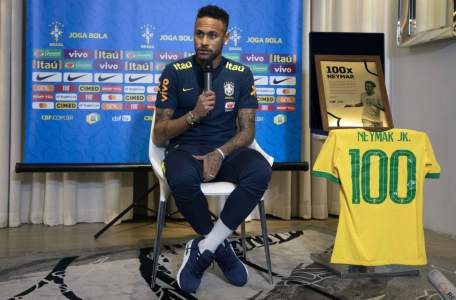 Paris striker Saint-Germain Neymar received a tribute for his hundred games with the Brazilian national team, which he will complete on Thursday in a friendly against Senegal.

In the previous one, the attacker admitted to having a "different treatment", as the Argentine Lionel Messi has in Barcelona and affirmed that he is "happy" and "at ease" in the PSG, from which he tried to leave in the last market of signings, but who now says he will defend "with nails and teeth."

"I have been in the national team for 10 years. I was always one of the main names and one of those who carried everything on my back. I never ran away from that. I always played my part very well in the national team," said the attacker in a wheel. Press, in Singapore.

"When a player reaches a level like that, it is normal to have a different treatment. In Barcelona, ​​Messi has a different treatment. Is it because he is prettier? No. It is because of everything he does. I do not speak only of myself , but from everyone who shows a football of that level. It's normal, it's part of soccer, "he completed.

The Brazilian spoke again of his summer, marked by a departure from the PSG that did not happen.

"I am happy, both in the national team and in the club. Everyone knows that he wanted to kill me, but I am happy now. The season started quite well in personal terms. I will give everything so that we can achieve titles," he said.

Neymar received from the hands of José Roberto Gama de Oliveira Bebeto, world champion with Brazil in the United States 1994, a shirt with the number 100, in a tribute organized by the Brazilian Football Confederation (CBF).

"I am very happy to reach this mark. I did not even imagine that this could happen in the best dreams," said the PSG striker.

The Brazilian national team is in Singapore for the friendlies against Senegal and Nigeria, scheduled for this Thursday and next Sunday.