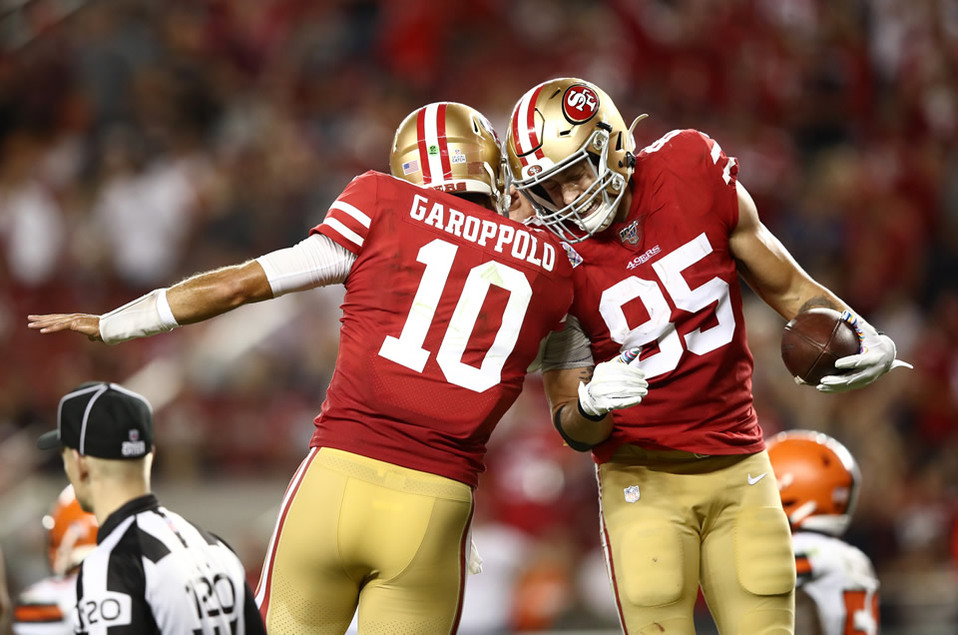 The San Francisco’s 49’s showed absolute superiority on both offense and defense and easily outscored the Cleveland Browns 3-31 in the game that closed the NFL week five activities.

With this triumph, San Francisco established itself as the most winning franchise in the Monday night games.

Cleveland again demonstrated too many defensive failures, which allowed Jimmy Garoppolo to serve himself "with the big spoon" and with a great mix of plays by land and air to get up on the scoreboard from the first quarter.

On the first play of his initial offense, which started in his own 17-yard line, San Francisco made the Cleveland defense look bad, as Garoppolo handed the ball to his runner Matt Breida, who, in just 11 seconds, got a 87-yard getaway to open the scoring in favor of the gambusinos.

Baker Mayfield, Cleveland quarterback, failed to read the 49’s defense and was intercepted twice in the first half.

In the third San Francisco offense, Californians scored again thanks to a five-yard pass from Garoppolo to Breida, who received the ball only in the end zone, to put the score 0-14.

Cleveland approached the scoreboard for a field goal, but the taste was short-lived since Garoppolo led his men back to the end zone for a 19-yard run by T. Coleman for 3-21.

San Francisco could increase the lead even more, but kicker Gould missed two field goals, one per quarter.

At the start of the third quarter, Garoppolo only took nine plays to score again, now thanks to a 22-yard pass to Kittle to increase the score 3-28.

For the last quarter, San Francisco could only increase their lead with a field goal to leave the game 3-31.

San Francisco was consolidated in the leadership of the West Division of the National and the Browns remained in second place in the North of the American.

In week six, Cleveland will receive some Seattle Seahawks coming up, while the 49’s will visit the Rams of Los Angeles.