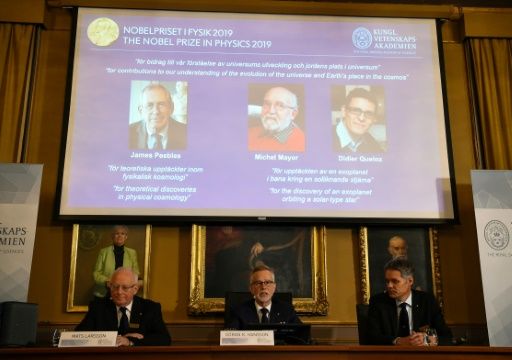 Canadian-American James Peebles and Swiss Michel Mayor and Didier Queloz won the Nobel Prize in Physics at the Swedish Academy of Sciences on Tuesday for their work in cosmology.

The prize "is half for James Peebles for theoretical discoveries in physical cosmology and half, jointly, for Michel Mayor and Didier Queloz for the discovery of an exoplanet around a solar-type star," said Göran Hansson, general secretary of the Royal Academy of Sciences of Sweden.

The three researchers, astrophysicists and astronomers, contributed to "a new understanding of the structure and history of the universe." "His works have forever changed our conceptions of the world," the academy added.

"This award is simply extraordinary," Mayor and Queloz reacted, shortly after the announcement.

James Peebles became interested in the cosmos, with billions of galaxies and groups of galaxies. Its theoretical framework, developed over two decades, plunges into the genesis of the universe, from the Big Bang to the present day.

Michel Mayor and Didier Queloz explored our galaxy, the Milky Way, in search of unknown worlds. In 1995, they first discovered a planet outside our solar system, an exoplanet, orbiting around a solar star, 51 Pegasi b.

Investigators will receive their prize from the King of Sweden in a lavish ceremony in Stockholm on December 10, the anniversary of the death of Alfred Nobel, inventor of the dynamite and creator of the awards.