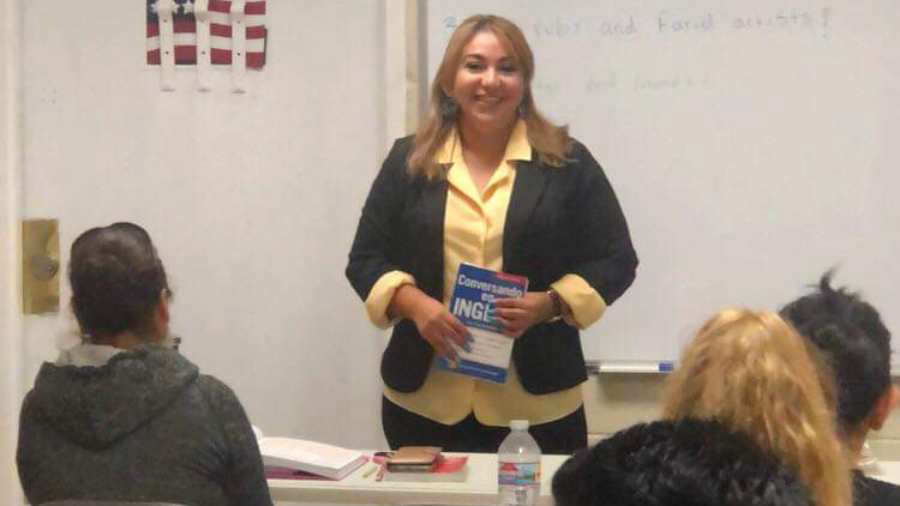 Her desire to overcome the barriers in a country that is not her own, the Salvadoran undertook her dream, an English and Spanish academy.

Salvadoran Noemy Valenzuela worked in a restaurant for seven years as a dishwasher in the United States, but in her desire and desire to improve herself she decided to become independent; On weekdays he began selling cosmetics, personal care items, and on weekends, in the yard of his house, pupusas. Until he managed to undertake, against all odds, the American Learning Center.

“Upon arriving in the US My first job was a restaurant washing dishes. I realized that life in the United States is very different from our lifestyle in El Salvador, time seems to be shortened and that you invest it all the time in a hard and double-work life, ”he tells elsalvador.com Noemy Valenzuela

"I decided to undertake my own dream and began selling various products, plus pupusas in the courtyard of my house and when I was not doing well, I went out to the streets to offer business to finish the sale, I did it for a good time," he says. Noemy

The Salvadoran says that it was then that she began to look for a place to study and learn English because she did not want to stagnate, so she knew the few opportunities that Latinos have to learn a second language, since for the long working hours Hispanic people do not have the time of the schedules offered by most schools in the United States.

It was precisely his own experience that woke up in Noemy the desire to found a bilingual education center, even on Sundays, although he assures that at first it was not easy, he was advised to achieve it.

“I looked for advice, I learned how to start a school. The teasing and criticism began to emerge, that I was not going to achieve it, that I was not a professional in this country and that I would not have a chance, ”says Noemy Valenzuela.

"I know that God, perseverance and discipline, are the key that opens the success of life," said the Salvadoran.

“I had to get away from negative people that subtracted my goals and desires of overcoming. With the help of God I began to seek information, legal advice, professionals in the educational field, then the idea was drawn up with a plan that became an action, I looked for a place and we moved forward, ”he says enthusiastically.

Noemy says that "God was and is the fundamental part of this project." He says that although he was afraid and nervous, he had the courage and brought his dream to life.

“Now I have a staff of professionals working at the American Learning Center. Where in addition to English classes, American Citizenship, adult baccalaureate (GED) classes, computer classes, tutoring for children and even makeup classes are taught, we expand! ”, Said the Salvadoran proudly.

The academy has a list of at least 100 active students with the desire to improve themselves in the United States, including Mexicans, Central Americans and South Americans.

Nohemy, who resides in Bloomington, California, also conducts a radio program called "New Forces," which is sponsored by the same academy and motivates Salvadorans and other people in the United States to fight for their dreams. "Don't stop in the face of adversity or criticism," he says.

“We are impacting and motivating the entire Latino community,” says Noemy.