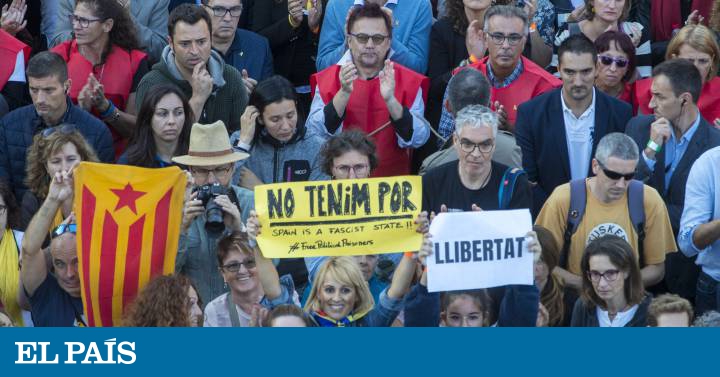 Protesters at the Barcelona protest against the 'procés' sentence. On video, new day of protests in Barcelona. Photo: C. Ribas | Video: EPV

The weekend you choose your own demonstration in Barcelona – an independentista, another not, and a third one that asks for dialogue – and then we calculate who has it bigger, started at noon with the weakest. Barely a hundred people came to the call of Parlem / Let's talk – "you can also turn it upside down," says his spokesman, Alan Barroso, with a smile, careful not to get unbalanced. Of 22 years, white shirt, color of the protest that gave the appointment an air of first communion.

There was a commendable civil environment, but clearly losing at this time. It is not well seen not to take sides. But it is symptomatic of social effervescence: this is a group of friends who two years ago made a call through social networks, went well, and now they make another, for feeling that they do something. Although 5,000 followers on Twitter is one thing and this, another. "We are normal people," Barroso repeats, whatever that means, and without political ascription. "We are tired of polarization and ask for dialogue, understanding and empathy."

An older lady tells him to warn of the calls not only for Instagram, which he does not use, because for example in La Vanguardia or on TV he has not left. Barroso studies a master's degree in Madrid and has spent the night in a bus. Eight hours, it has arrived at 7.30. To pay for the trip, they put two euros each among the 40 of the chat of friends behind it. The future of this platform is unknown. He doesn't even know it.

In the afternoon the independence mobilization was already massive, within the tradition. Outside buses, 50s with backpacks, people of all types and ages. The most significant is how since the sentence the overtly aggressive tone has been firing, with no return: "Out of the occupation forces!" Or as a graffiti says: "Outside colonizers." This a few months ago they were howls of kids who exaggerated, now everyone cries out, already convinced to live oppressed and without freedom, despite the magnificent demonstration.

And another frequent shout: "Manipulative Spanish press." The journalist tells a woman to forgive, that he is one of those journalists from Madrid and to tell him what he thinks he is not going to manipulate. "Well, look, put that we are thousands, half a million at least, the whole Marina street filled to the end, and that this sentence has been unfair, that political prisoners, because that is what they are, they have to release them, those convictions, or the murderers, and that we feel unfairly treated, all Catalans, also those who are not independentistas, and that it is enough with police repression, to beat up the boys. And we will never give up. ” He says he will look the next day to see if everything goes well. His name is Mercedes Rovira, from Barcelona.

Half a million on the street, or 47% at the polls, for these people it will always be the entire Catalan town. Just as they sing that the streets will always be theirs, as Fraga de Franco's minister or the guerrillas of Cristo Rey said. From there, they cite 80% of Catalans who, according to surveys, would like a referendum. By noting that perhaps there are many non-independence demonstrators in the demonstration, but in the elections they continue to vote for other parties, the conversation is blocked.

That is why, without a doubt, the most repeated cry at the head of the protest, full of politicians, was: “Unitat!”. In the comments there was a diffuse tiredness towards a Catalan political class that is tolerated because there is no other choice and there is no oven for buns. But the unit now is also to shut up that and pull forward.

When finished, the elders went home or to dinner, but thousands of young people approached Via Laietana, in front of the National Police Headquarters, without going through the exit box. Not that new ones appeared to put it together. At nightfall the roes and tension began. Naive morning, festive afternoon and night of cakes, one more day in Barcelona.