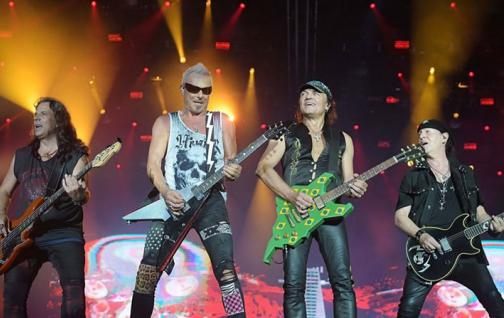 The first concert of the German group Scorpions in Ecuador, whose performance was scheduled for last Saturday, October 12, 2019, had to be suspended due to the stoppage that the country experienced after the announcement of the elimination of fuel subsidies. Now, the event organizing company seeks to reschedule the date of the band's show in the country.

This was announced by the firm CKConcerts in a statement issued on Friday, October 18, 2019 that ensures that the suspension of the presentation of the group was a consequence of "a force majeure or fortuitous case."

On October 10, 2019, the Pichincha General Police Administration suspended all authorized public events in the Province. The measure was adopted by the validity of the declaration of the state of exception that was arranged through decree 884 on October 3, 2019.

CKConcerts says the company "is having negotiations with the Scorpions band about the reasons for suspension and rescheduling." The organizers will look for Scorpions to return to the country "on a possible tour that would take place in 2020". However, according to the statement, confirmation of a new date "will take a few weeks."

According to CKConcerts, the tickets that were purchased for the Scorpions concert on October 12, 2019 would be valid for the new date. The company also deluded Ticketshow, the firm responsible for the sale and printing of tickets "of any liability generated by the suspension of the event.

CKConcerts issued this October 18, 2019 a statement about the suspension of the Scorpions concert in Ecuador. Photo: capture

The Scorpions concert was not the only one canceled in Quito during the demonstration day. Two shows that Italian singer Laura Pergolizzi (LP) planned to perform in the capital on October 8 and 9, 2019 were also suspended.

CKConcerts informed that the interpreter has already confirmed the date of reagendaation of her shows in the country and that it will be informed "in the next few days".