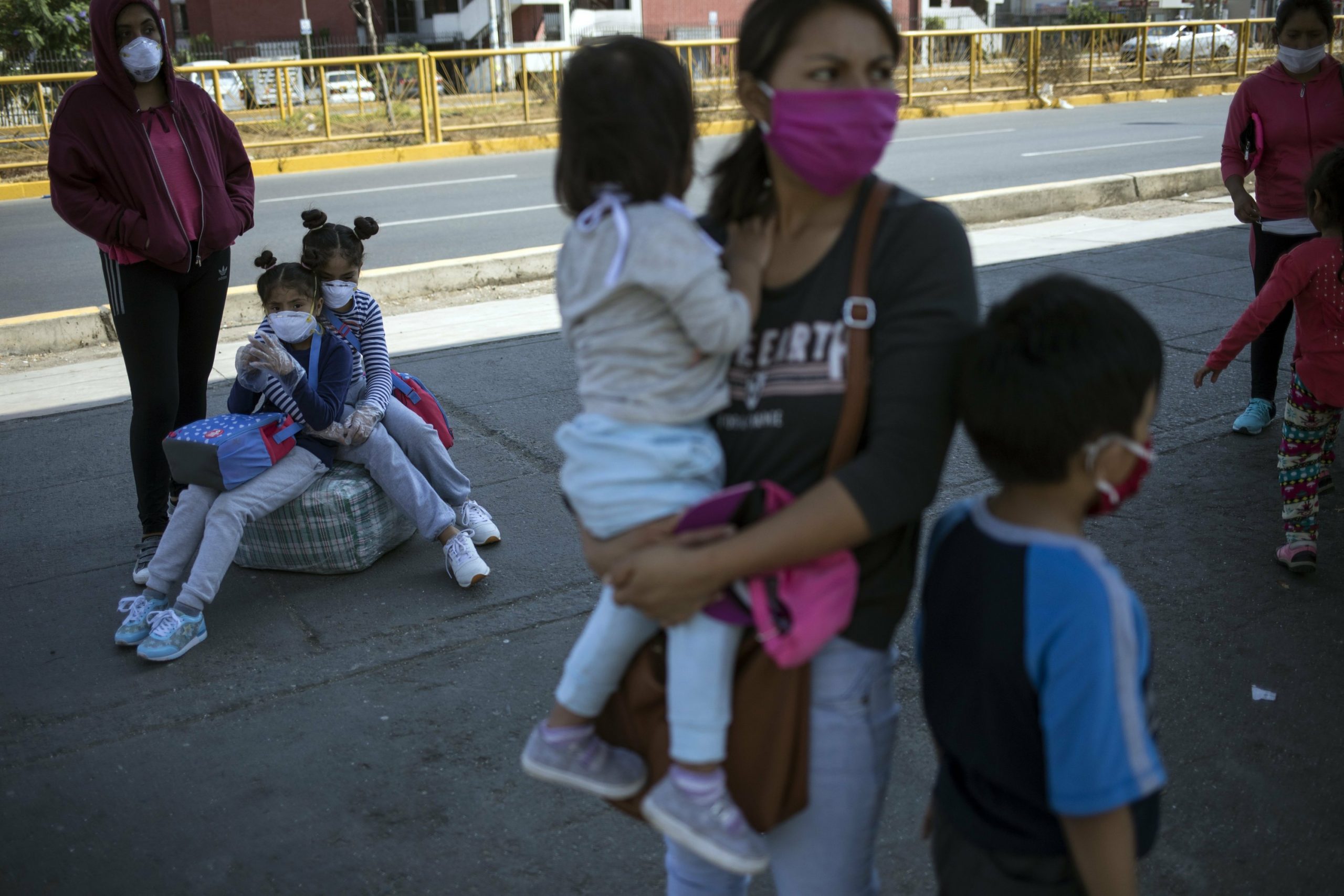 LIMA (AP) – The Peruvian government extended the mandatory quarantine on Thursday until May 10 after the medical college suggested the need to extend it because the country is “at a time of great transmissibility” of the coronavirus.

Meanwhile, the Ministry of Justice plans the release of some 3,000 prisoners in the country’s overcrowded prisons, especially elderly convicts and inmates with babies or pregnant women, to prevent the spread of the COVID-19 disease.

The government of President Martín Vizcarra published in the official gazette El Peruano the conditions that prisoners must meet to obtain this benefit. The most important is not having committed serious crimes.

The 68 prisons, with an overcrowding of 138%, are the ideal places for the transmission of the coronavirus, according to epidemiologists. So far, 13 prisoners have died in Peru and 500 are infected out of the total of 572 deaths and 20,914 COVID-19 infections in the country.

Amid the overcrowding, prison guards have a difficult job: avoiding catching and stifling riot attempts motivated by concerns about the virus.

The pardons will be carried out gradually as each case is reviewed, according to the state prison agency.

Powerful prisoners who are not sentenced, but who are investigated in large corruption cases, have taken the opportunity to request their release.

César Villanueva, a former Prime Minister of Vizcarra, accomplished his mission in the first days of the month, while Keiko Fujimori, the imprisoned leader of the opposition Popular Force party, processed a release request that she also requested for her prisoner father, former President Alberto Fujimori. (1990-2000).

Keiko is under investigation for allegedly receiving bribes from Brazilian construction company Odebrecht, while her father is sentenced to 25 years for murder.

For its part, Chile is still unable to control a serious outbreak of coronavirus in the Puente Alto prison, south of Santiago, which has registered 181 infections between guards and prisoners in less than a month, a period in which four attempts have been reported. riot and flight. In the last one, which occurred the day before, inmates held five guards hostage for a couple of hours.

The Health Minister, Jaime Mañalich, reported that “an important number” of the 1,100 inmates of the prison will be transferred to other jails and that 15 of the infected are hospitalized, two of them serious.

In Chile, with 11,812 infected and 186 dead, part of the strategy to contain the pandemic consists of placing and lifting the so-called “dynamic quarantines” from one neighborhood to another and carrying out some 5,000 tests daily to detect and isolate the infected.

For his part, Mexican President Andrés Manuel López Obrador announced that starting Monday, loans will begin to be given to small entrepreneurs who did not fire employees during the pandemic. According to the director of the Mexican Social Security Institute (IMSS), Zoé Robledo, 645,000 companies will benefit from a loan of just over $ 1,000 that must be repaid within three years.

In Mexico, formal jobs are registered with the IMSS, and also dismissals. In this way, the agency was able to obtain data on who did not fire personnel during this health crisis.

The country topped a thousand dead on Thursday night, registering at least 1,069 deaths, and raised confirmed cases to more than 11,600 while continuing to prepare for the peak of the pandemic expected in mid-May.

According to Undersecretary Hugo López-Gatell, it is working with an estimate that there may be a maximum of 15,000 people in critical condition at the same time at that time, and that is why 700 hospitals for COVID-19 patients have already been converted.

In addition, María Elena Álvarez-Buylla, general director of the National Council of Science and Technology, announced that the assembly of several models of fans built in Mexico and non-profit is being finalized with the aim of having 700 of these teams by 15 May, which will join those already owned by the government and those bought from the United States and China.

In an attempt to control inflation, the Federal Consumer Prosecutor’s Office initiated administrative procedures in 23 self-service stores and large supermarkets in the country, due to unjustified increases in the prices of basic foodstuffs or mouth mask and antibacterial gel, to 223 retail establishments, and warned to 75 major producers and distributors of these products. This prosecutor’s office indicated in a statement that the fines in the most serious cases can range from 7,000 to almost 200,000 dollars.

Meanwhile, more than 900 Colombians who had not been able to return to the country due to the closure of the airports were repatriated on 12 humanitarian flights in the last four days, the foreign ministry said. None of the passengers had coronaviruses, but they were still sent home to serve a mandatory 14-day quarantine.

Chancellor Claudia Blum ratified the commitment to continue helping at least 2,200 Colombians who are still stranded in different parts of the world.

In El Salvador, the government on Thursday presented five initiatives to protect jobs and support companies and the country’s economy so that they can withstand the COVID-19 pandemic that has destroyed world economies.

Authorities will set aside $ 1.6 billion for loans for small, medium, and large companies, and the plan will include companies reporting bankruptcy that can be verified before the pandemic. In addition, a $ 500 million project is being prepared to rebuild agriculture and make the country food self-sufficient, and create one million jobs in the countryside.

According to the Ministry of Health, El Salvador registers 250 confirmed cases of coronavirus, eight deceased and 67 recovered. Of the total infections, 117 arrived in the country after visiting countries affected by the pandemic and were sent to Containment Centers for a quarantine of 30 days, according to authorities.

In Colombia, a mandatory quarantine is in force until May 11 to prevent the spread of COVID-19, which so far has left 4,561 affected and 215 deceased.

On the other hand, after receiving 170,000 serological tests from China this week, the Argentine Ministry of Health will begin on Friday to evaluate the proportion of people positive for COVID-19. The research will focus on public transport and in the first stage samples will be taken at the main train stations in Buenos Aires.

In Bolivia, a police sergeant died after catching the coronavirus while on duty, the first casualty of the epidemic among security forces, said police commander General Rodolfo Montero.

However, Bolivia “is below the lowest scenario, although the curve begins to rise,” explained the director of Epidemiology, Virgilio Prieto.

The Ministry of Health reported on Thursday three deaths from COVID-19, including that of the police, which now total 43 deaths and 703 positive cases since the first infection was detected in the country on March 10.

Acting President Jeanine Añez expressed regret at the death of the sergeant.

“We are below the lowest projections, but the contagion curve is beginning to rise,” Murillo said at a press conference, and called for compliance with the isolation that began on March 22 and will end on April 30. Despite tight controls, authorities admitted difficulties in enforcing the restriction in some neighborhoods and towns.

In Ecuador there have been 560 deaths, 11,183 infected and 1,328 recovered, according to health authorities. Guayas province continues to be the region most affected by the pandemic in the country with 7,502 cases.

In Venezuela the number of infected people rose to 301, said President Nicolás Maduro.

Thirteen new infected are related to an outbreak detected in a baseball school on Margarita Island, in the island state of Nueva Esparta, where in recent days another 62 cases were reported in that academy. Nueva Esparta became the state with the most infections by adding 93 cases, the president said.

Several people, including the director of the academy, are detained for not obeying the order to suspend activities and undergo a quarantine, in force in this South American country since March 16, part of efforts to break the chain of transmission of the coronavirus.

Meanwhile, the Venezuelan Education-Action Program on Human Rights (PROVEA), one of the country’s main humanitarian organizations, denounced on Thursday that a person died, “allegedly killed by police officials” in the town of Upata, in the southeast from Venezuela, amid a protest over the high cost of living and fuel shortages.

The victim was the young Charlis Núñez Parra, who received a bullet to the head, Provea said on Twitter.

In the last five days, protests have been staged in several cities due to the disproportionate increase in food prices and the shortage of gasoline, PROVEA said, which have increased after almost 40 days of quarantine.

Until now, the Venezuelan authorities have not spoken about these protests, nor have they confirmed some of them.

The most affected by preventive isolation measures is a poor majority who do not have formal jobs and their income depends on piece-work activities, many of which are now paralyzed, according to human rights activists.

At night, in a message to Guatemalans, President Alejandro Giammattei said that the number of infections in the country increased by 42, the day with the most new cases to date, with which there are already 373 in total and 11 dead. Of the total number of cases, two people have died from causes unrelated to the virus, authorities said.

“Working hand in hand with the government, we have managed to control this pandemic,” said Giammattei, adding that Guatemala has “20 infected people for every million (inhabitants).”

An hour earlier, the president said in a conversation on Instagram that Taiwan has been the only friendly government that has financially helped the Central American country to cope with the pandemic.

The coronavirus has infected more than 2.7 million people and killed more than 190,000 worldwide, according to the Johns Hopkins University Center for Systems Science and Engineering, which bases its data on reports from the governments and the health authorities of each country.

In most people this virus causes mild or moderate symptoms that disappear in two to three weeks. But in some people, especially older adults and those with underlying health conditions, it can cause more serious illness and even death.