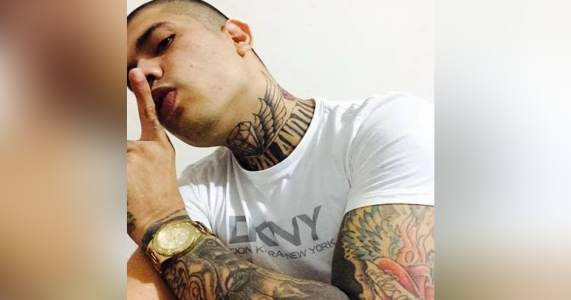 The murder of a rapper has shocked much of Mexico. Alejandro Barret the real name of the singer had left the world of narcorridos to sing Christian songs.

For a while the singer’s style was “narco rap” or “flow Malandro”, but in recent years towards Christian music

With a coup de grace was found the body of matamorense rapper Alejandro Barret, known as “5050”.

The artist’s body, was detected in the ejido El Refugio on this border, after their families will report it as missing.

In the beginning, the rapper was dedicated to compose and sing alluding to organized crime issues , including a song dedicated to Cartel del Noreste (CDN).
Therefore, the style of singer described as “narco rap” or “flow Malandro”.

With the theme “My Testament” Alejandro Barret realizes life and fears of those who have engaged in illegal activities.

“I ask God where I’m not leave me, though bad in my footsteps is not forgotten and protects me. He makes me physically missing and mentally, why ya know, of why I’m delinquent. I like money, live a good life in the fridge in my house, about food. I remember how much he suffered from childhood I realized that being so did not want. while I was growing up in a neighborhood of the lowest with my friends addicts, gangsters and thugs, what do you expect of me ?, I hope not to disappoint you when you realize I’m dead or in prison, “referred to above topic.

However, some years ago, she changed radically as he said, knew the word of God and decided to get away from the life of excess that used to have to compose themes, dedicated to Christ.

In an interview, the rapper said he had issues for those who pay you, but not only for drug traffickers, but for people who had money or living in the United States.

He said that on two occasions nearly died due to overdose because when meeting with wealthy people, had access to drugs, without paying a penny.

“I wanted to change when I came remorse two days of craziness, I looked skinny, looked like a zombie. One day I arrive in the morning and I told God that he could not do this, that I knew existed but show me his power to give me a real and powerful and immediate test I replied. I started to feel a tremor in the body, I could not do anything but mourn, I told my friends and did not believe me, “said the rapper 2016.

So far, authorities have not given an official version of events but beyond that Alexander Barret, was kidnapped by armed men and later killed and his body abandoned a blow.