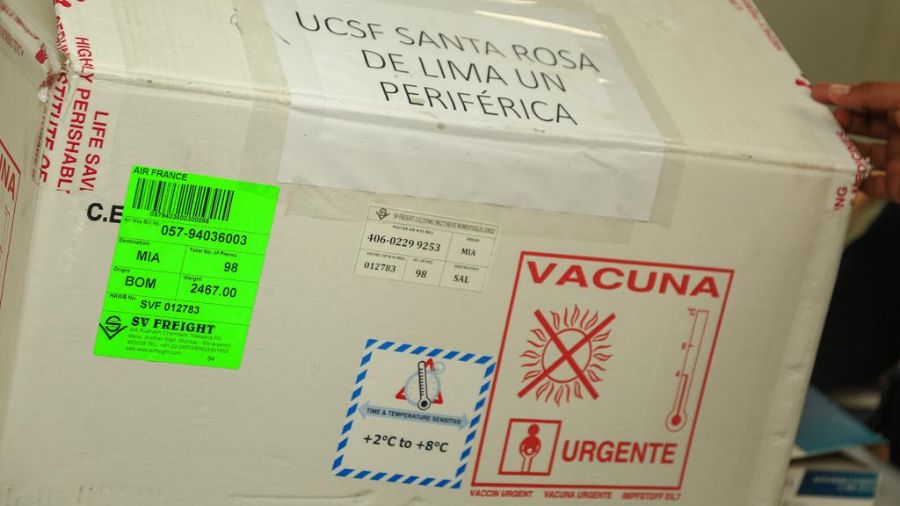 According to an image uploaded by the Presidential House, some of the vaccines did not enter El Salvador on February 17 as indicated by the Government, but since last February 3

A photograph uploaded by the Government Communications Secretariat to Twitter included a detail that, according to versions circulating on social networks, indicates that some of the vaccines against COVID-19 entered El Salvador on February 3, and not on February 17. last February, as the Government has officially announced.

If so, the Government kept a quantity of these vaccines in its possession for 14 days, despite the urgency of starting the immunization of health personnel fighting the disease.

Vaccines arrived in El Salvador on February 3, according to airline tracking

The journalist Cecibel Romero, who collaborates with Salud con Lupa, identified that one of the boxes delivered Wednesday night at a health post in Santa Rosa de Lima, La Unión, included a white vignette, which yielded information different from the one indicated by the Bukele administration.

This vignette, with number 406-0229 9253 as revealed by said image, is from a shipment from the UPS company, which arrived from Miami to El Salvador on February 3, at 10:17 in the morning. This is how it is registered in the digital system of said shipping company.

Instead, the official government discourse is that all the 20,000 doses received on February 17 came from a flight from Mumbai, India, from the Spanish company Iberia.

The finding sparked a series of negative comments against the government’s work on social media, which in turn produced a swift reaction from President Nayib Bukele, who uploaded a tweet highlighting his earlier speech.

While the images on vaccination of front-line personnel are maintained in official government networks, the general population does not know what plan the Bukele administration has regarding the rest of citizens who are interested in being immunized; It is also not known in detail where the 162 vaccination posts announced by the Ministry of Health are, nor is their exact cost.