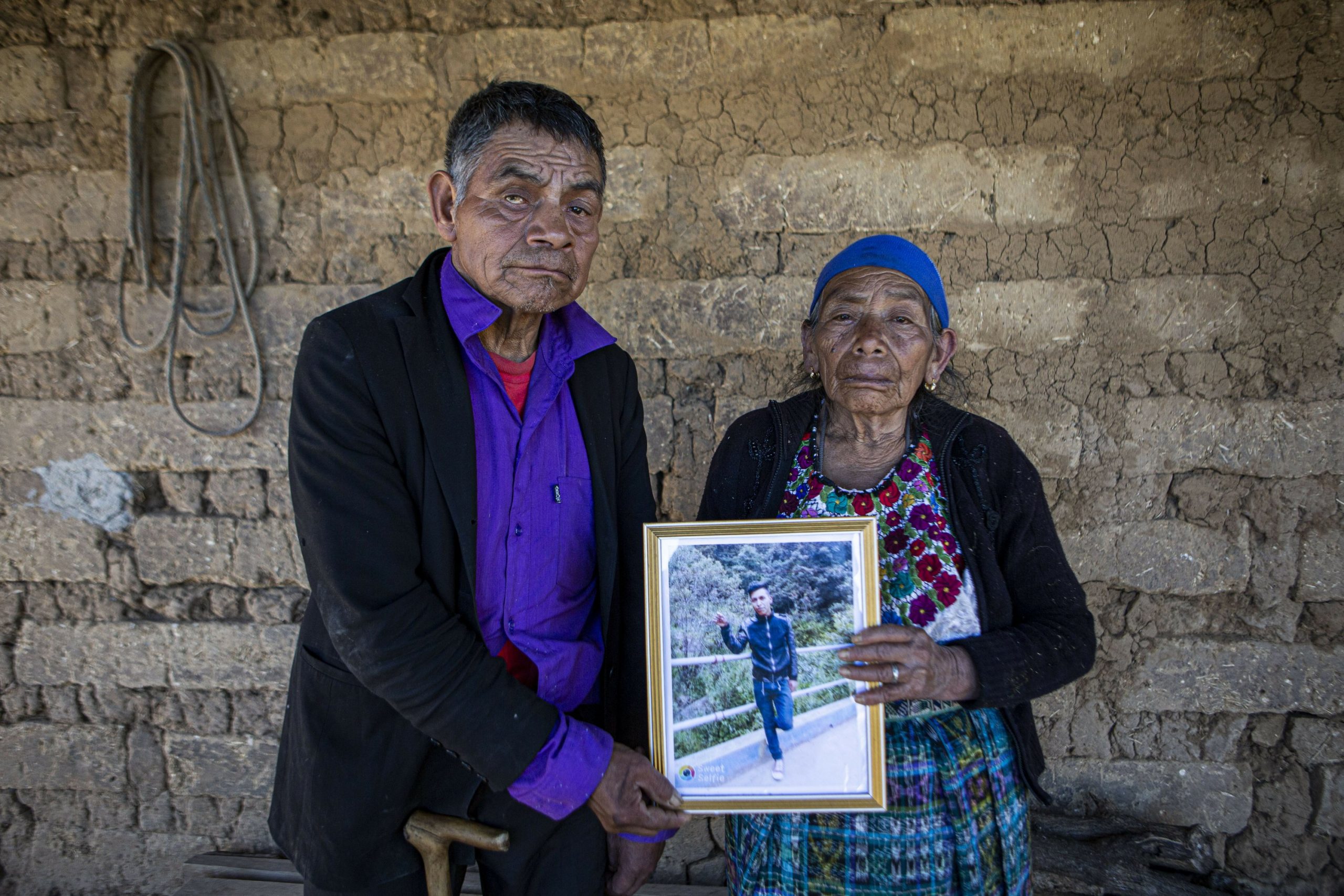 CIUDAD VICTORIA, Mexico (AP) – When state agents in northern Mexico allegedly shot and killed 19 people – including at least 14 Guatemalan migrants – in late January, it was a tragedy that critics said authorities had already been warned that it could happen.

In 2019, prosecutors accused the same Tamaulipas state police corporation, which then had another name, of having forcibly removed eight people from their homes in the border city of Nuevo Laredo, forcing them to put on military-style uniforms, carrying them up. to vehicles to make them look like criminals and shoot them dead.

Now a dozen agents of the Special Operations Group (GOPES) – of 150 elements – have been arrested to prosecute them for the killings of at least 14 migrants and two Mexicans perpetrated on a rural road in the town of Camargo, near the border with Texas. The corpses were burned and so charred that this has prevented the identification of three other victims.

Authorities had already received abundant warnings about problems with that police unit, created last year with remnants of a group of special forces accused of the 2019 massacre and other atrocities. Even a federal legislator in January pushed for a non-binding resolution in the Mexican Congress to protest the beatings and robberies perpetrated by that corporation.

In November, a Tamaulipas business association accused GOPES agents of breaking into the home of one of its members and stealing cash, appliances and other belongings. The group said the victim even took photos via her home security cameras showing uniformed officers with guns on their backs robbing her home.

The complaint was ignored and no steps were ever taken to control the corporation.

If at that moment they had done it, “if they had turned around to see, maybe we would not be mourning the death of 19 people,” said Marco Antonio Mariño, vice president of Security of the Federation of Chambers of Commerce in Tamaulipas.

For more than a decade, well-equipped rival drug trafficking groups have waged the longest and bloodiest war for control of territory in Mexico’s history. Gangs of armed men with names like “La Tropa del infierno” circulate regularly in vans with handmade armor.

The cartels co-opted so many municipal police forces in Tamaulipas that the state decided to disband all of them and rely more on better-trained state police officers. When the federal government withdrew Marines, who used to provide much of the support with high-powered weapons to police forces in the state, it encouraged the state government to create elite units like the GOPES.

The reputation of the GOPES is so fearsome that the United States government, which trained some of its elements, has sought to distance itself from that corporation, which it refers to both by its previous initials of CAIET (Center for Analysis, Intelligence and Studies of Tamaulipas), as by its current name, GOPES.

The US embassy in Mexico City said that three of the 12 agents charged with the migrant massacre “received basic training and / or front-line supervisor training” through a State Department program before being assigned to the special corporation.

“The training of these individuals took place in 2016 and 2017 and they fully complied with the Leahy verification (of antecedents in respect of human rights),” said the diplomatic headquarters.

CAIET was an oddly academic name for what was essentially a quick-reaction SWAT-type police force. Like the GOPES, the elements frequently use masks and armored vehicles.

In 2019, the bodies of the eight people taken from their homes in Nuevo Laredo were later found with gunshot wounds to the head, dressed in camouflage uniforms in the style of drug traffickers and bulletproof vests bearing the initials of the Northeast Cartel, as well. like weapons next to them. Prosecutors finally concluded that CAIET agents planted the weapons and other equipment on these people before executing them.

Raymundo Ramos, a human rights activist who investigated and exposed the Nuevo Laredo massacre, stresses that, despite these findings, only two of the 40 CAIET members implicated in the killings are in custody facing charges. Three other officers agreed to testify in exchange for their charges being dismissed, and two more are at large.

The authorities did not dissolve CAIET, they only changed its name to GOPES.

“It is a recurring fact that the (state) governments just change their name to clean the image of their police,” said Ramos.

Prosecutors have not mentioned why the GOPES agents allegedly decided to murder the migrants, and hearings in the case have so far not been open to the public.

The migrants were accompanied by several Mexicans who apparently operated as armed “protection” for the “shipment” of migrants smuggled to the border with the United States. The Gulf Cartel obtains a large part of its income by collecting protection from migrant smugglers to cross its territory. He also makes money by kidnapping migrants traveling alone, torturing them until they reveal the phone numbers of their relatives in the United States and holding them to demand a ransom.

One of the theories is that GOPES agents opened fire on armed gang members who were with the migrants aboard the vehicle, because three assault rifles were found in the burned-out van. The bodyguards were shot dead, and then the agents killed the migrants to hide their mistake.

State prosecutors say the fact that no casings were found at the scene of the massacre means that police officers collected them to hide clues that gave them away.

Ramos noted that this coincides with the unit’s tactics. “Normally, they do not leave witnesses, it is part of their training,” he said.

In the 2019 massacre in Nuevo Laredo, the police corporation did leave four witnesses in the houses from which the victims were taken, apparently only because four were adolescent women or mothers with children.

The problem is not just limited to killings, said Óscar Hernández, an anthropologist at the Colegio de la Frontera Norte.

“It is not news that some police corporations lend themselves to this type of practice, not only violence, which is the most visible, but others such as collusion and corruption,” Hernández said.

Mariño, from the business organization, stressed that some state police corporations have once again made it possible to travel safely on the roads in Tamaulipas, where bus drivers and passengers used to be kidnapped without being heard from again. .

The GOPES is not the first problem of abuse of the police forces in Tamaulipas.

In 2014, the “Grupo Hércules” of the state police, which functioned as a kind of paramilitary escort for the mayor of the border city of Matamoros, and Mexican marines kidnapped and murdered four people, including three American brothers.

Erica, Alex and Jose Angel Alvarado Rivera, from Progreso, Texas, disappeared in October 2014 while visiting their father in Control, a small town in Mexico near Matamoros, on the border with Brownsville, Texas. A friend of these people, the Mexican José Guadalupe Castañeda Benítez, was also kidnapped. The bodies of all were found with gunshot wounds to the head more than two weeks later.

Other facets of this year’s massacre remain unclear. For example, Ramos said that some of the officers detained in the case have said that they killed the migrants but did not burn the bodies.

An information document from the United States Drug Enforcement Agency (DEA) suggests that the Northeast Cartel was active in the area at the end of January, with the intention of assassinating a prominent figure of the Gulf Cartel, when ran into migrants. Some people believe that cartel gunmen from the Northeast Cartel could have participated in the massacre, or at least set fire to the truck and the corpses later to undermine the activities of the Gulf Cartel.

There is one point on which everyone agrees: The corpses were so burned that in the normal course of investigations they could never have been identified and they could have been buried and forgotten as possible participants in yet another confrontation between cartels.

However, the GOPES did not know that the van was part of a larger caravan of vehicles transporting migrants, including a Guatemalan migrant smuggler who knew all the victims. He was the one who notified their families of the massacre in their countries of origin, and the relatives made the news public.

“If it weren’t for that man, they probably would have been buried as just another suspect,” Ramos said.