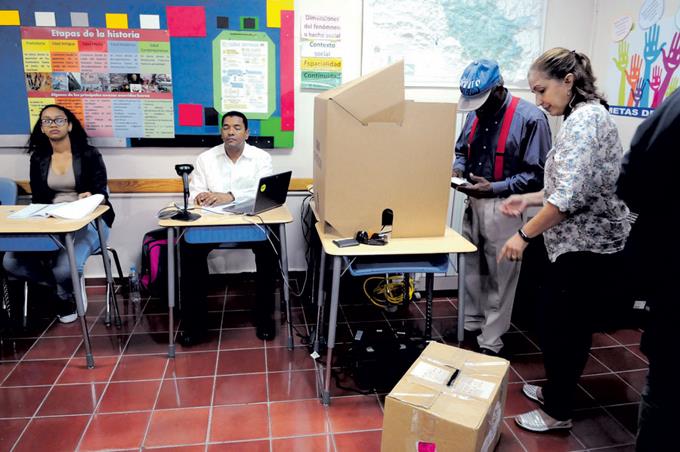 If Gonzalo Castillo is chosen as the presidential candidate of the Dominican Liberation Party (PLD), as everything seems to indicate, the impact of his political feat can become a key factor in guaranteeing the unity of the ruling party and most likely keeping him in power in the elections of May 17, 2020.

Similarly, if the winner in the Modern Revolutionary Party (PRM) is Luis Abinader, as it should happen, the country would gain something by burying attempts by politicians of the past to push back the march of history.

That a man with militancy in the PLD (Gonzalo), but without a history of seeking elective positions, challenges and defeats Leonel Fernández in just 70 days, with twelve years of experience as a ruler and with more than two years “collecting signatures” to deal with to go for another eight more, is a rare phenomenon in Dominican politics.

The only triumph of Gonzalo and the fall of Leonel will immediately reorganize party sympathies, without the chiefs of Leonelism – including the conservative fundamentalism that influences him so much – can prevent it. At the moment I write – Thursday's newspaper – I am not convinced that Leonel will be allowed to count Sunday's votes to be defeated by an “amateur” politician, when he has the opportunity to avoid that “file” and negotiate a part of the next government, including the Vice Presidency of the Republic, which I suppose nobody would deny to one of his followers in an agreement.

If he persists in arriving as a candidate for the vote, he has the option of negotiating after the defeat, but from a position of weakness, at the price of “taking what he is given and if he does not want it, he leaves it”. I understand that Leonel does not have it easy because if in the face of the imminence of his fall he tries to preserve himself and agree with the danilismo, he will unleash the anger of the “conservative fundamentalism” that supports him outside the PLD.

PLD unit
After Danilo tied the re-election colt on July 22 and declared that he would support the “new blood” in the face of the “minority project that was trying to prevail in the PLD”, I was convinced that this party will not be divided before of the next elections. Whatever the result of the primaries, win Gonzalo or Leonel, the great Peledeist mass will support the chosen candidate and I suppose the group leadership will do the same.

If Gonzalo is chosen, at least 90% of leonelism will be integrated into his campaign because Leonel will have no choice but to try a favorable pact for his followers.

On the other hand, if the winner is Leonel, the danilismo has no choice but to accept his defeat and go to a negotiation with leonelism to bring him to power.

Those who are dreaming that a victory of Leonel will now mean a division of the PLD, should wake up, because what else could Danilo do to the accomplished fact that he could not stop his rival? If Leonel wins the primaries, the negotiation is much easier because from the Vice Presidency for Gonzalo -not for Reinaldo-, the negotiation spectrum can be much broader than if the result was Gonzalo's triumph, because Leonel is not interested the Vice.

How teacher?
Leonel has walked through the newspapers this week and – words more, words less – has said that he is the depositary of the merits, the ability and the experience to govern against the shortcomings attributed indirectly to Gonzalo.

I think the lapidary phrase that portrays Leonel's superiority complex was said to Adriano Miguel Tejada in Diario Libre, on Wednesday, when he said: … "We cannot put the next government in the hands of anyone."

Do you remember when in 2008 you ruled out going to a debate with Miguel Vargas Maldonado, candidate of the PRD, because in his opinion "he doesn't know how to conceptualize"?

At that time as now, Leonel considers himself enlightened in front of the incapable. The same script he used against Peña Gómez in Santiago in 1996 saying that the fight was between a lion (he) and a defenseless monkey (Peña).

That story attempted against Hippolytus in 2000, calling him a donkey and yerba, but the maid came out in response and his bodyguards killed two suppliers of grass for the donkey in Moca. So far came the donkey and the grass! As he is now referring directly to Gonzalo by calling him "anyone," Leonel has to prepare himself because if an "anyone" defeats him, as I suppose will happen in a few hours, the least he can do is apologize to Gonzalo for underestimating him and Danilo. for challenging him on all planes. A leader as "enlightened" as Leonel, and so well advised by a cohort as diverse as he has at his side, should not dare to merge again for a while as he did in 2015 and reappear with a face of "I was not "After a loss to an" anyone "who must end his ambitious career to be a monarch.

So write the story
It is very nice for Leonel to say before the editorial executives and owners of the Daily Listin that he supported Danilo for the 2000 presidential candidacy and was not re-elected, although they asked him to.

On the other hand, when Danilo aspired in 2007, Leonel admits that he defeated him because the re-election was allowed constitutionally by the reform sponsored by Hipólito Mejía in 2002 and he (Leonel) should not have been challenged because he was the favorite in the polls.

What Leonel does not say is that although reelection was legally possible for 2008, in the PLD it was forbidden and he was the first to step on that boschist principle that came from April 1963 to personally benefit.

If Leonel was a true Peledeist, a disciple worthy of Juan Bosch, he did not have to look at the Constitution alone, he had to turn to the Bosnist principle that the only president in office who has modified the Constitution to prohibit re-election was precisely Bosch.

That is why it should not be forgotten that when Leonel used all the resources of the State to neutralize the majority in favor of Danilo in the PLD in 2007, a crushed Danilo declared: “The State imposed itself and (we know) that the re-election has a space within the Dominican Liberation Party ”.

Did Leonel have the right to seek reelection in the PLD in 2008? Do not! He imposed it? Yes! Leonel forgot to tell Listín executives that without the 12 deputies and the senator that the PLD kindly ceded to the Hipólito Presidential Project (PPH), Hipólito would never have been able to modify the Constitution, which was opposed by the rest of the historical leadership of the PRD.

But Leonel and the PLD leadership "sold" them for the PRD to divide and the re-election of Hipólito failed. The re-election of Leonel would triumph in 2008, but it dragged sequels that today explain the very likely loud chasco, nothing less than at the hands of an "anyone", which is none other than Gonzalo.

Leonel's last mistake
Leonel's last and decisive mistake was to put Margarita Cedeño to give public support to her aspirations. I said it immediately on Twitter on Wednesday: “Margarita, a substitute for the President, by publicly supporting Leonel for the primaries, has just given President Danilo the right to support Gonzalo and no one can attribute to him that he leans power in his favor.”

I just saw that Danilo goes this Thursday (yesterday) to close the campaign with Gonzalo, which perhaps he would not have done if Margarita had not supported Leonel.

When the storm passes, we will count the stars!