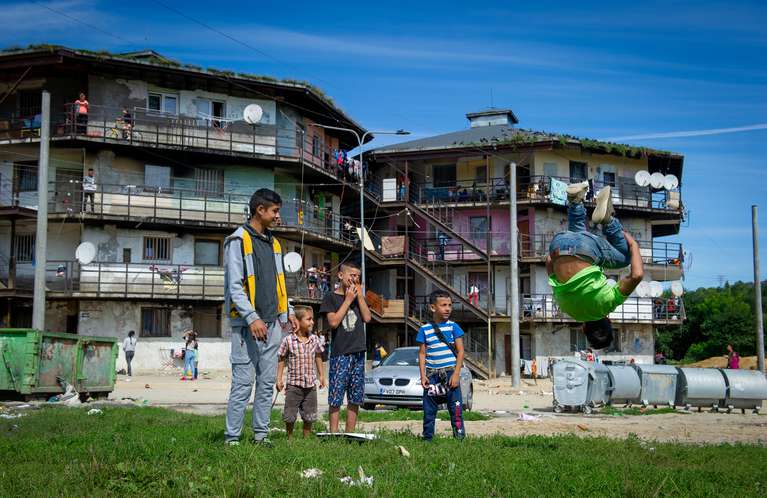 KOSICE, Slovakia (AP) – Until recently, even the police did not dare to enter the Lunik IX neighborhood of Kosice at night, the largest city in Slovakia after the capital Bratislava.

Lunik IX, however, will be one of the main stops that Pope Francis will make during his pilgrimage next week through “the heart of Europe”.

Francisco intends to visit the gypsy community there. He will be the first pontiff to meet the most marginalized minority in Slovakia. A site worthy of someone who presents himself as the “pope of the periphery”.

Lunik IX is the largest of some 600 slums where the poorest sectors of the Roma community live, of some 400,000 people. Most lack running water or sewage systems, gas and electricity.

“It is a great honor for us,” said the mayor of Lunik IX Marcel Sana, who has lived in this neighborhood since he was two years old. “Even if you only say a few words, your presence will be a great encouragement to those of us who live here, the underprivileged and the poor who need that support.”

For Peter Zatkulak, one of four priests from the Salesian order of Don Bosco, a Catholic congregation that settled in Lunik IX in 2008, the pope’s visit offers the possibility of rethinking the relationship between Roma and the rest of the population.

Gypsies have long been victims of racism and discrimination in central and eastern Europe, and they continue to face enormous obstacles in the field of work and education.

“The Roma (Gypsies) have been segregated by the majority many times in the past. We don’t want that to continue, ”Zatkulak said. “We need to integrate them and that is what is happening now. Through our prayers, we want to seek reconciliation between Slovaks and Roma, and also with the church, because we have hurt ourselves and that has to end. Now is the time to say ‘I’m sorry’ and to start over ”.

He believed that Francisco can play a key role in this process.

“The inhabitants of Kosice must remind the world that all big cities have a dark side, which we do not want to see. The greatness of Francisco is that he is focusing attention on those places, “he said. “Let us be ashamed of our past mistakes and try to correct them.”

Andrea Buckova, government liaison with the Roma, said she hoped that the pontiff’s trip would give impetus to the area and “that it will not be something temporary.”

News of the pope’s visit quickly spread through Lunik IX, generating great expectations among its 6,000 residents.

“I heard about him. You tend to visit the poorest places. Maybe that’s why he decided to come here, because we are the poorest neighborhood in Slovakia, ”said Monika Gulasova, a 19-year-old high school student who is the lead singer of a choir that will sing during a Mass in a Salesian church on Sunday. .

“It will bring a new light and hope to our neighborhood,” he added.

“It is very nice that you come. A gift from the Lord, ”said 67-year-old Anna Turtakova.

Sana, the first Roma mayor of Lunik IX with a university degree, took office in 2014 and pushed for numerous improvements in this neighborhood of communist-era building blocks. Piles of garbage can no longer be seen on the street and uninhabited buildings were demolished. There are street lights and dozens of surveillance cameras that help maintain order. The schools in the area are well regarded and several playgrounds were built.

But from the stage set up for the Pope’s visit in front of the Salesians’ center, it will be possible to see that there is still a lot of poverty, including a sector of improvised hovels among trees and bushes.

Jan Horvath, who lives there with his wife and four children, plans to go see the pope with his family, but he doesn’t expect much from his visit.

“We’ll see what it brings us, but no one is going to help us,” predicted the 41-year-old man. “We have to manage on our own.”

Now that the summer is over, he is worried about the arrival of the cold and says he does not know how he will fight it at home.

“I hope that at least some things change. After all, it is the right hand of God, or of Jesus Christ. Who else can we trust, if not him?

Francisco will arrive in Slovakia after a short stopover in Hungary on Sunday. He will stay in the country until Wednesday and will also visit Bratislava, Presov and Sastín.

The last papal visit to Slovakia was made by John Paul II in 2003.