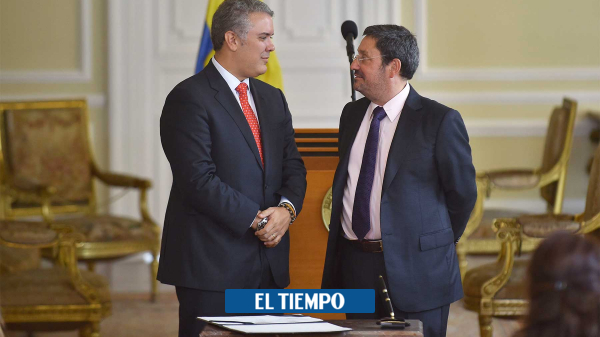 President Iván Duque decided on Monday night to keep in charge of Colombia's ambassador to the United States, Francisco Santos Calderón, after several days of controversy over private talks held by the diplomat with Foreign Minister Claudia Blum, and that They were leaked to the press.

The decision that Santos continue to lead the Colombian representation in Washington was known at the end of the meeting with the diplomat, who had been called to consultations following the episode.

Last Wednesday, the Publimetro newspaper revealed the audio of the talk between Santos and Blum, in which the ambassador uses strong comments about the US Department of State, and even some of his colleagues in the government itself, and about his superior , the outgoing Foreign Minister Carlos Holmes Trujillo.

"Here, the State Department, which was very important, is destroyed, does not exist, does not exist," Santos assures the designated Foreign Minister in the talk, as recorded in the recording.

The diplomat argued that "ten years ago," when he was vice president, he went to that country and knew that "the entrance was always" the State Department. "Today that is over," Santos told his new boss.

(You may be interested: The stir that caused the talk of Pacho Santos and the new chancellor)

Minutes after this mention, in the same conversation, the ambassador referred to two of his fellow government: former Defense Minister Guillermo Botero and the former chancellor and now head of the Defense portfolio, Carlos Holmes Trujillo.

About Botero, he said he had "a problem" of interlocution "with him, since, according to Santos, the former minister" did not work, did not speak English "and did not go to the United States.
“I hope that Carlos (Holmes Trujillo, new mini-defense) is an interlocutor, hopefully. He doesn't know about that, but … ”he said.

On the mention of Botero, Santos put in his Twitter account, hours after meeting the talk with Blum, the following trill: “I had a conversation with @GuillermoBotero in English. Yes he speaks it, and well. My mistake. I'm sorry, Dr. Botero. ”

In the talk with Blum, the diplomat referred to Holmes Trujillo and his performance as chancellor, and said that “he did nothing. I didn't have a strategy. ”

At that time of the conversation, the new Foreign Minister told the ambassador that Holmes Trujillo "was doing politics" and in the audio he is heard saying: "A disaster."

On Venezuela, one of the most sensitive issues on the foreign agenda, the new official asks Santos to help him "think" of a strategy to address it, since, according to her, "the solution is not a military coup."

In this fragment of the conversation, the Colombian ambassador and the new foreign minister analyzed the role of the Americans in that crisis. "All I see is covert actions in there, actions to generate fear, to support the opposition in there, which is very lonely," Santos told his incoming boss.

The revelation of this conversation caused, at the time, a tremendous stir, since these are two of the most prominent foreign policy officials in the country: the ambassador to Washington and the new chancellor, his immediate superior.

Now, Santos plans to return to the embassy in Washington on Monday, and possession of the new Foreign Minister is expected.