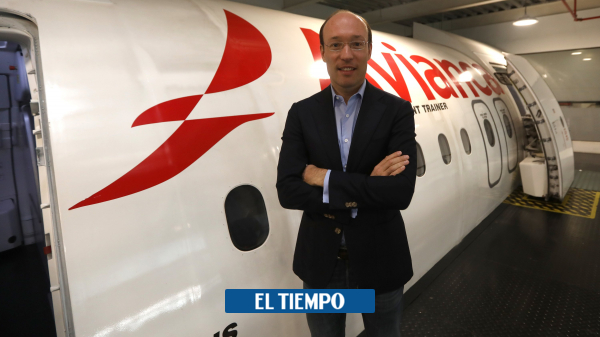 Although between January and September 2019 Avianca Holdings reported losses of 516 million dollars (a year ago, the balance in red was 17.9 million), the company's chief executive, Anko van der Werff, confirmed that the administration continues Go ahead with the transformation plan.

In a dialogue with EL TIEMPO, the manager explained that this adjustment in search of a more efficient company has led to the fleet now being 155 aircraft (41 less than September 2018), and acknowledged that there is an adjustment in the plant of personnel, but not in the magnitude of two thousand employees, as mentioned.

How large will be the resizing of the company with the Avianca 2021 plan and its impacts on the operation?

We now have around 155 aircraft –140 are jets and 15 ATR–. I see this size. Obviously we have reduced the fleet during the year, but this is a good size.
There is something I read, which is incorrect, that as part of all this there is a plan of 2,000 layoffs (layoffs), which is incorrect. There is no such plan.

What we do have is to look for a more efficient Avianca, and we have to remember that last year the board of directors made the decision to reduce the fleet, cancel some unprofitable routes and therefore adjust. It's something different and different. Avianca's quest for efficiency continues and is something that will take longer. It is not something that is ready.

Last year they said they wanted to save labor costs by up to 15%. What will then be the ideal plant size and the number of officials that you have to do without?

There are two things here. Last year is gone, there is a new board of directors, a new management team and here we are. What they said is for them. The other point is that the 2,000 employees is not something that comes from us.

What I have said clearly is that there is an adjustment of the network, there is an adjustment of the fleet, and we have not paid a few months to the financial market. So, it obviously means that we have to make complicated decisions. Let's go ahead with the transformation plan. Surely there are still complicated episodes, but we are doing very well.

As seen in the numbers, we are profitable, there is a lot to do, but there are still many beautiful ingredients, such as the Bogotá hub, the growth that we will show in international markets and how, for example, strategic alliances with United and Cup, are clear points of the transformation.

What has been the effect of the new tariff scheme recently implemented?

There is very good news about customizing rates. Last week was the highest in terms of sales for the whole year, once we introduced the scheme. It means that we are on the right track. Also, in new destinations, in December there will be two new ones, from Bogotá to Asunción and Bogotá-Montevideo.

We must end the strategic alliance with Copa and United, and it is very good news by the end of the year.

How can the celebration of 100 years help you in the recovery process?

The most beautiful news of the end of the year is the 100 years of Avianca. There is only one airline that started a few weeks before us and we are the second oldest in the world that has flown continuously. It is a pride. We are going for 200 years.

Does the 'hub' of Peru follow or does it finally close?

The operation in Peru was greatly reduced in the national part, and international destinations remain. Not all destinations, but a good number.

Agreements with creditors must be formalized

Noting that to date there are agreements with 90 percent of the credits with which there are defaults today, the financial vice president of Avianca Holdings, Adrián Neuhauser, stressed that the key point now is to formalize those agreements, to clean completely all the default (default) that the company has.

(You may be interested: Avianca closed the bond exchange offer)

In this sense, the manager revealed that, of the entire capital structure of the company, equivalent to about 5,000 million dollars, more than 3,500 million are in default (no payment).

"The amounts are not only the part that we defer, which are just over 250 million dollars, but we must negotiate the entire contract and clean the entire default," he added.

And he said that the administration of the company is working to achieve all the debt rebalancing as soon as possible, aspect in which the only goal that has a date is the loan that United Airlines and Kingsland Holdings (the company's main minority partner) will give. ), which must be ready before December 31, to exchange and extend the bond for 550 million dollars, a process that was accepted at a percentage of 88.1 percent.

Meanwhile, in the adjustment plan the company has had to deal with aspects that affect the operation, such as the full unavailability of the Boeing 787 Dreamliner aircraft, since after an incident in Europe with a Norwegian plane in Italy has risen the number of inspections of all aircraft of this type in the world.

"We will be with about three planes without flying this quarter and part of the next quarter," he said.

On the plan for the sale of non-strategic assets, this year the company will receive between 100 and 120 million dollars, of which 50 to 60 percent has already arrived.

Between January and September, Avianca Holdings had operating income of 3,469.3 million dollars, a figure that implied a reduction of 3.6 percent with respect to the 3,598.9 million dollars that it reported for the same cut of 2018.

According to the document of the financial statements corresponding to the third quarter, published by the company, the firm's operating expenses rose 9.1 percent annually between January and September, standing at 3,744.7 million dollars.