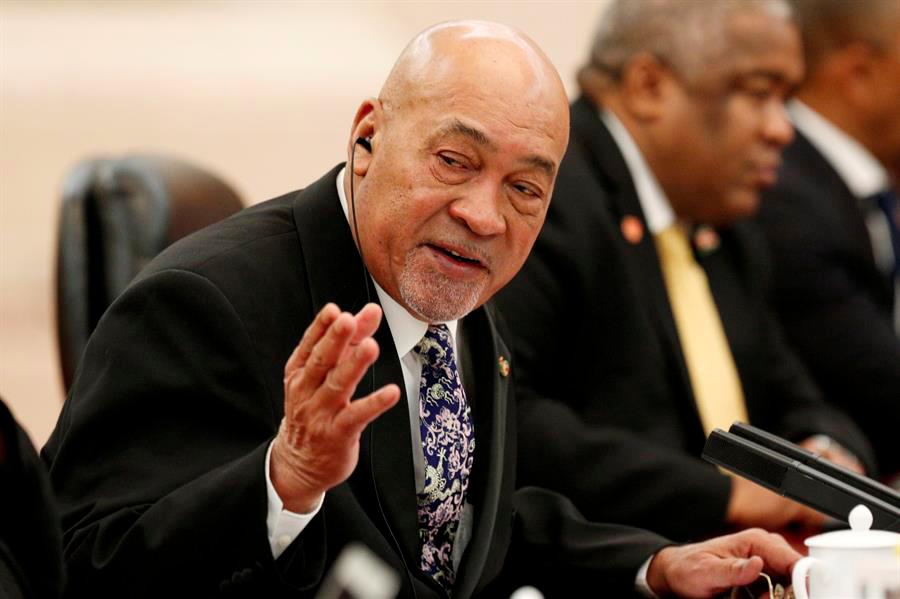 The president of Suriname, Dési Bouterse, faces an uncertain future after a court in the South American country sentenced him to 20 years in prison for the murders of 15 political opponents in 1982, a verdict that marks the end of a historic trial that began in November 2007.

Suriname woke up on Saturday with the 'hangover' of the verdict by the so-called 'December murders' against the historic figure of this territory of just over half a million inhabitants.

The country, which is a neighbor of Brazil and the two Guyanas, became independent in 1975 from the Netherlands, where local authorities asked the population for calm after informing the verdict.

The absence of Bouterse (was in China) at the time of knowing the conviction, subtracted tension in the streets after concluding a very long process with the verdict of a jury composed of three magistrates, who nevertheless did not issue an arrest warrant against him President of the country

The first international reaction came through a joint declaration by the diplomatic missions of the Netherlands, the United States, the United Kingdom, Spain, Germany and France in Suriname, in which it is stressed as' critical 'that the verdicts be' implemented and respected in accordance with the rule of law '.

The president's lawyer, Irvin Kanhai, said it was a political verdict and has already launched the appeal process.

Although no incidents have been reported so far, the most delicate moment is expected to occur when Bouterse returns from his trip through China to the South American country, a date that is not known with official accuracy, although some media speak of the possibility of Let it be shortly and others be delayed.

The lawyer of the relatives of the fifteen murdered, Hugo Essed, said that Bouterse should resign immediately after the conviction, for some facts about which the president of Suriname asked at the start of the apology and accepted 'political responsibility ', although he denied his direct involvement.

In February 1980, he led a coup d'etat, known as the 'Sergeant Revolution', which overthrew the Government of Henck Arron and placed him as 'strong man' of the country.

After violently repressed incidents by the military, on December 8, 1982, 15 opponents of the military regime were executed in Fort Zeelandia, in the capital, Paramaribo, for which he was convicted on Friday.

The judicial process that concluded on Friday with the verdict was delayed for more than a decade due to the obstruction of Bouterse, who after being elected president of Suriname in 2010 passed an amnesty law that would eventually be declared unconstitutional.

After he was re-elected, in 2016 he ordered the prosecution of the South American country to interrupt the process in the name of national security, a measure also rejected by the Justice because it is an ongoing process.

Character of reference in Suriname, Bouterse was born in 1945 in a family with different ethnic backgrounds and in 1968 traveled to the Netherlands to enroll in the armed forces of the European country and ancient metropolis.

Back in Suriname, in 1980, along with a little more than a dozen colleagues, he heads the 'Sergeant Revolution', which installed a dictatorship until 1991, temporarily interrupted in 1987 by elections under international pressure.

Elected in parliamentary elections in 2010 with his training, Mega Combination, he obtained 23 of the 51 seats of the Suriname Parliament, although without the absolute majority.

Bouterse, already as president, a position he renewed in 2015, recognized the figure of his companions at once and, in addition, declared on February 25, the date of the military uprising, as the national day of the South American country, which earned him the rejection international.

Bouterse's history with the courts is not new, since in 1999 he was sentenced, in absentia, to 11 years in jail by a court in the Netherlands for drug trafficking, although he could not be extradited because he was prevented by Suriname's law .

The conviction against Bouterse in the Netherlands was related to his alleged link with the Suri cartel that would introduce drugs into Europe from Suriname and Brazil.

The president's son, Dino, has also had problems with justice and in 2005 he was sentenced to eight years in prison for drug trafficking, among other crimes, in addition to being sentenced in the United States for his ties to the Hizbullah terrorist group.

Bouterse is president for the second term after winning the parliamentary elections of May 2015 with the National Democratic Party.

The country awaits the arrival of its president before an uncertain scenario once the court, despite the conviction, did not issue an arrest warrant and the decision was appealed immediately.

There is fear of the possibility of a street response in an unstable country with a weak economy that is highly dependent on aluminum production.