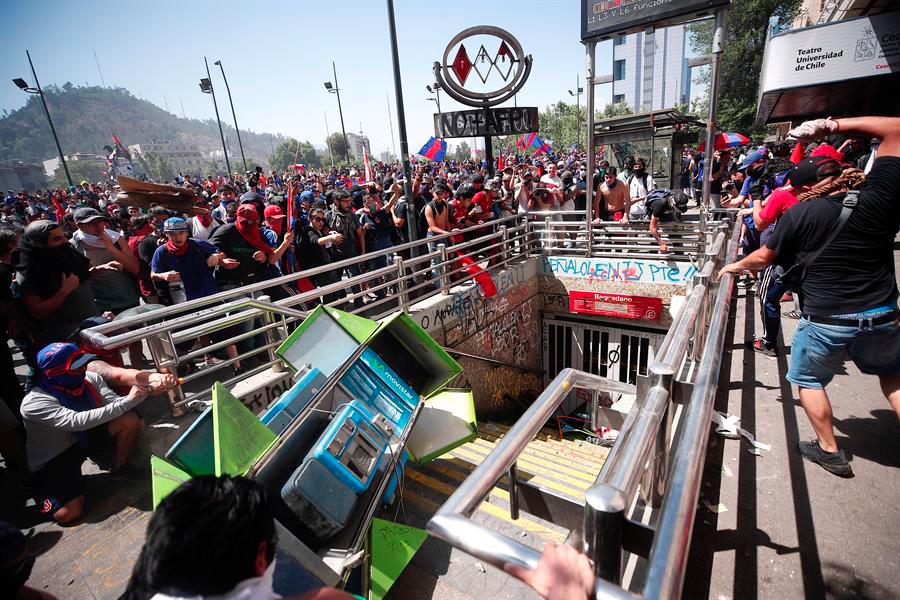 Chilean President Sebastián Piñera sent a bill to Congress on Thursday to lower the electricity tariff, part of a package of measures with which he tries to stop a social explosion that has left at least 18 dead in a week, but in any case the day culminated with mass protests.

"We know that this social agenda does not solve all the problems, but we also know that it constitutes an important relief and an important contribution to solve those problems," said the president, announcing the sending to Parliament of the initiative that freezes an expected rise of 9, 2% in electricity until December 2020.

He added that he instructed his ministers to contact the various social sectors "and thus listen, loudly and clearly, to the voice and message that Chileans have transmitted to us in recent days."

Piñera's social agenda includes a 20% increase in pensions and a 16% increase in minimum incomes, projects to reduce the prices of medicines _which in Chile are among the highest in the region_, and reductions in the income of the Parliamentarians, who receive up to $ 14,000 per month.

Official and opposition politicians valued the measures, although the center-left sector called for profound changes, such as the reform of the private health system and the one that manages pension funds.

Despite the announcement Thursday was a new day of mass demonstrations throughout the country, several of which ended in riots starring hooded men who threw stones and sticks at the police, which repressed them with force. The pans were heard again in neighborhoods of the Chilean capital, while in the neighboring port of Valparaíso there were several looting of local businesses.

A dozen of the 16 regions of Chile are agitated and the curfew was in effect until Friday morning.

Almost a week ago, a violent social explosion emerged in the Chilean capital that followed the protests of students in rejection of the increase in the subway fare, leaving damage to most subway stations, as well as looting and supermarket and pharmacy fire. Then it spread to almost the entire country.

Following these disorders, there have been demonstrations in which, in defiance of the state of emergency and the curfew declared by the government, thousands of people are participating who demand salary increases, reductions in the prices of basic services and medicines, and better pensions , among other requirements.

Patricia Bravo, owner of a small motorcycle repair shop, described the president's measures as "pills." He said he protests daily because "they are robbing us with the AFPs (private pension administrators)" and "our elders are unable to live" with their retirement of 105,000 pesos (about 144 dollars).

In the concentrations, banners with legends such as "No more abuses", "We want to live with dignity", "Chile woke up" and "We are not at war, we are united" are read, the latter in reference to the affirmation of Piñera, who at the beginning of The crisis claimed that Chile was at war with criminal gangs.

Riot police repress many of the concentrations across the country with rubber bullets and tear gas.

In the vicinity of the neighboring port of Valparaíso about a hundred truckers expressed themselves on Thursday in favor of the demonstrations, some with signs saying "No more tolls increase".

The government said in a statement that the "serious events" decreased from 169 to 126 on the last day and no deaths were reported.

Piñera said that "the situation of public order and citizen security is improving."

Foreign Minister Teodoro Ribera announced that, at the request of Piñera, the United Nations High Commissioner for Human Rights, Chilean President Michelle Bachelet, will send a working group to Chile.

"After monitoring the crisis from the beginning, I have decided to send a verification mission to examine complaints of human rights violations," Bachelet tweeted.

María López, an assistant at a 37-year-old nursing home, said she protests "to change things, to lower the price of medicine and food," and said government measures "do not reach."

One of the difficulties presented by the current crisis is that the dissatisfied have no spokesperson.

Marcelo Mella, political analyst at the University of Santiago de Chile, told the AP that "we do not know who is behind the protests and not even the government has much idea," and wondered how Piñera will do to resolve the conflict before "a complex movement, without interlocution ”.

Mella distinguished several types of mobilizations: the first on the periphery of the Chilean capital "with a level of violence that is an expression of class unrest, in Marxist terms, of the ancient logic of those excluded by the system"; that of the impoverished middle class that is "very indebted, very angry", and that of the upper middle class "which is the expression of a postmodern left; a lot of snobbery. "