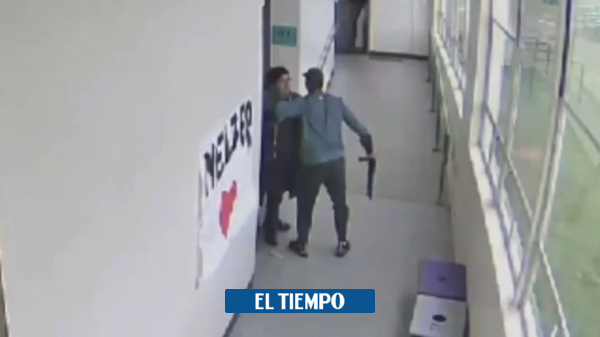 Keanon Lowe is considered a true hero in Portland, the largest city in the state of Oregon (USA).

The football coach avoided a tragedy at a school, thanks to his quick reaction to a student who had a shotgun in his possession.

The situation happened 5 months ago, but until now the video was known of the moment in which Lowe disarmed the young man and avoided a tragedy.

On May 17, 2019, Angel Granados-Díaz, 19, arrived at his school, Parkrose High School, Portland, with a fully loaded shotgun.

She entered a classroom with the gun camouflaged in her coat, but some classmates caught up to see her. Some of them, after the incident, said it was “a scary moment” and that they tried to hide and cover themselves, as told to the KOIN 6 News network, affiliated with the CBS and in charge of publishing the video of the events.

The moment of disarmament came after Lowe, who was in the classroom, pounced and took the gun, "while the students ran out and shouted."

“I analyzed everything very quickly, I saw his eyes and his expression and I understood that it was real, that the weapon was real. Then, my instincts took over, ”the coach told the TV channel.

In the video, the coach is seen leaving the room with the shotgun in his right hand, while trying to move Granados-Díaz away from her with his left.

Once he gives it to another teacher who approaches the scene, he hugs the young man, who tries to separate for a few moments, without success.

“I felt compassion for him. We had a conversation and it fell apart, I just wanted him to know that I was there to help him, to save him. I told him that this is a life worth living, ”he added.

Amidst the tension over the situation, the school was closed and the students evacuated. Granados-Díaz, meanwhile, was captured.

He pleaded guilty and his sentence was probation for 36 months, at which time he must receive mental health and addiction treatments. He also has a court order that prevents him from approaching the school.

During the investigations, it was determined that Granados-Díaz wanted to commit suicide and that he only pointed the gun at himself. In addition, he had made suicidal statements to relatives and was under the influence of alcohol on the day of the events.

"Some depression and mental health problems played a role in this incident," said Adam Thayn, the young man's lawyer.