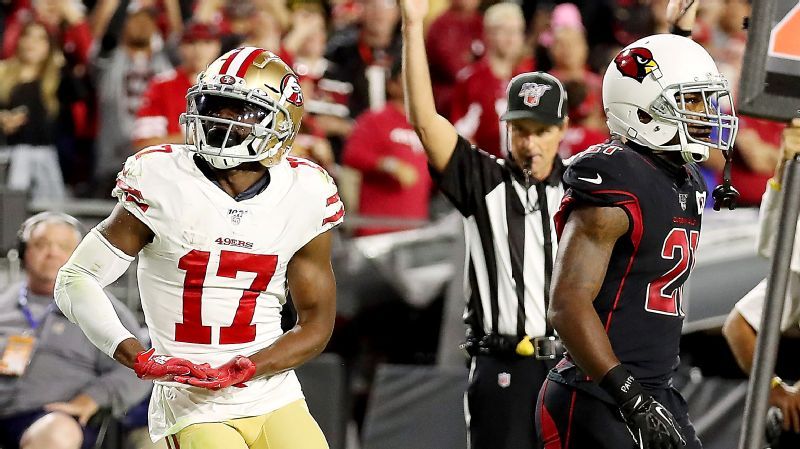 MIAMI – The deadline passed with a lot of noise, and few nuts.

Although although the rumors were so much more than the possible transactions, it was clear the great difference between those who intend to win now, and those who seek to rebuild.

If you get the feeling that this year there have been higher betting lines than in the past, you are right.

In fact, after nine weeks of action, there have already been nine games in which one team was favored by more than two touchdowns over the other. To put it in perspective, it is already the fifth largest number of such games in history, and there are still eight weeks to go; 1992 was the year with the highest number of encounters with lines higher than two touchdowns, with 15.

This disparity does not do good to the league in my opinion, but being bad has its prize, there are few level quarterbacks and the window of success is so small with the salary cap, I think we will continue to see this trend for several years.

Which brings us back to the changes made:

1) The Patriots acquired open receiver Mohamed Sanu in exchange for a second-round pick.

Verdict: I believe that New England paid too much for a correct player, in which they had already had interest in the past. Sanu will help an offensive that has not played the level of its potential, and it is true that the value of the selections is relative to New England because nobody develops talent like Bill Belichick, but in my opinion Atlanta is the winner in this change, since it had no place with the Falcons.

Verdict: I love this change for the 49ers, because not only an area of ​​deficit, but at the same time I always thought that Sanders was one of the most underrated receivers in the league. I understand that he is 32 years old and the Achilles tendon breaks, but in my opinion, Sanders is that good, and has already made his impact felt. Denver thinks about the future, but I don't see it very promising for now.

Verdict: Possibly Seattle is the team that improved the most this week. From Earl Thomas that the Seahawks do not have an important presence at the bottom of that defense, and Diggs is that good. It is true that he is injured and could only debut in week 10, but that defense will improve dramatically. We can even add Josh Gordon, who was added via waivers. The Seahawks think they can be candidates, and I don't blame them. Detroit is left with several problems at the bottom of its defense.

4) The Cardinals add runner Kenyan Drake, for a sixth-round pick, which could become a fifth round, depending on production

Verdict: It's easy to say that Drake was a great acquisition after his big debut last Thursday. Unless David Johnson and Chase Edmunds' injuries are more serious than they are telling us, Drake is going to train a lot as a receiver, but I think it can work well in the Kliff Kingsbury system. In Miami, the f act that Drake "didn't follow the script" frustrated them, and never had consistency. Drake is very talented but it is curious that two bodies of coaches in the NFL and Nick Saban at the university level, did not give him ownership.

Verdict: I don't understand why the Jets gave up so fast on Williams, who in my opinion has a great future. It's a great move for the Giants, who now have a great inner duo with Dexter Lawrence and Williams. In the Jets the exodus of talent and drama continues, now with Jamaal Adams criticizing his management, and all indications point to Adam Gase having the days numbered.

By the way, when Rob Gronkowski retired, he left the "Best Closed Wing in the NFL" vacant. The simple selection as successor was Travis Kelce, but I genuinely believe that George Kittle may even be better than him.

The 49ers, who stretched their undefeated, found a jewel in Kittle. And I say they found it because it was the ninth tight end chosen in the 2017 draft. Kittle was the 146th player chosen (fifth round), and the closed wings chosen before him in that draw were: O.J. Howard, Evan Engram, David Njoku, Gerald Everett, Adam Shaheen, Jonnu Smith, Michael Roberts and Jake Butt.

A new demonstration that the draft is far from being an exact science.

To the talent scouts who make these difficult decisions, or even if they ever have any doubts, I advise them to follow the number 77, to whom I show them in the PLAY OF THE WEEK.

* Local teams are in second place

As I always say, it is never good to play every game. In other words, there are some that are better to pass up. Therefore, I decided to add this section to publicize my six favorite teams with betting line. Opinions are welcome, since the idea is to add an attribute that is beneficial to readers. The order of the teams is not accidental and the forecasts do not affect the total statistics.

We are many who are in this type of competition. In this case, the betting line does not matter. Just do not repeat any equipment throughout each week. Of course, these forecasts will not affect the total statistics either. In brackets, the teams chosen so far.

I have always said that I am not a fan of teasers, since they come from the word tempt and are called "sucker bets". But, at the request of several of the readers, we add this section. Here, being three teams, the line is modified by 6 points, but you must hit all three to collect. Next, I name the three teams, with the altered lines in parentheses.

At the request of several of the readers, we include a high and low match for each week.