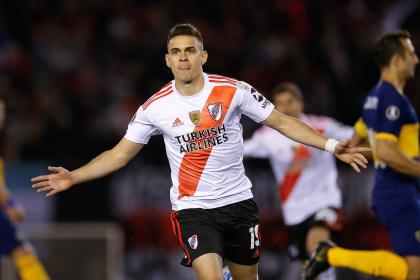 River Plate won 2-0 on Tuesday, in the first leg of the Copa Conmebol Libertadores, played in a crowded Monumental stadium. With goals from Colombian Rafael Santos Borré and Ignacio Fernández, the team led by Marcelo Gallardo goes with a good advantage to the return duel, which will be on Tuesday 22 of this month, in La Bombonera.

The game was barely three minutes away when River Plate approached the Boca Juniors area with danger. That play ended in a foul that Emanuel Mas committed to Colombian Rafael Santos Borré. The Brazilian central judge did not see him at the time, so the VAR served to ensure the infraction.

Borré himself was in charge of the collection and did so with great quality against an Andrada who played it long before his right. In this way Borré celebrated his first goal in five classics played since his arrival at River Plate in 2017.

The one who insisted most for Boca Juniors was Alexis Mac Allister, who at 18 minutes tested goalkeeper Franco Armani with a shot from outside the area.

At 42 Borré had the possibility of scoring the second goal for River, after a play by Exequiel Palacios, but the shot of the Colombian went wide.

A minute later Boca had the clearest chance of the game: in a counterattack, in which the 'Xeneize' team took River's defense badly, Ramón Ábila approached the area, made a cut and left it to Nicolás Capaldo , who incredibly finished high.

Before going to rest, the Uruguayan Nicolás de La Cruz had another clear opportunity for the local: a free kick from the peak of the area and the charge went to the angle, where goalkeeper Esteban Andrada arrived miraculously.

In the second half, the game dropped in pace and intensity. River controlled the ball, but did not risk, while Boca seemed unable to spin any play to bring danger to the ‘millionaire’ area.

Only until the last 20 minutes did the emotions come. The biggest of all for River who scored 2-0 in a great collective play that ended with the assistance of Matías Suárez, for the right zone for Ignacio Fernández, who appeared in the center of the area and finished off to beat Andrada.

The Monumental went crazy and River was infected: at 75 he could score the third with Matías Suárez, who demanded goalkeeper Andrada with a shot from outside the area. At 76 Boca responded with a soft shot from Capaldo, which Armani controlled.

On the end, Ábila had another shot, the last one with some danger to Boca, which Armani stopped. River did look for more. Exequiel Palacios missed an incredible 90 + 1 minute with a high shot in front of the goal.

Boca finished with 10 for the expulsion of Nicolás Capaldo. The return will be on Tuesday October 22 at the Bombonera and the winner will face in the final, in the National Stadium of Santiago de Chile, the Guild or Flamengo.