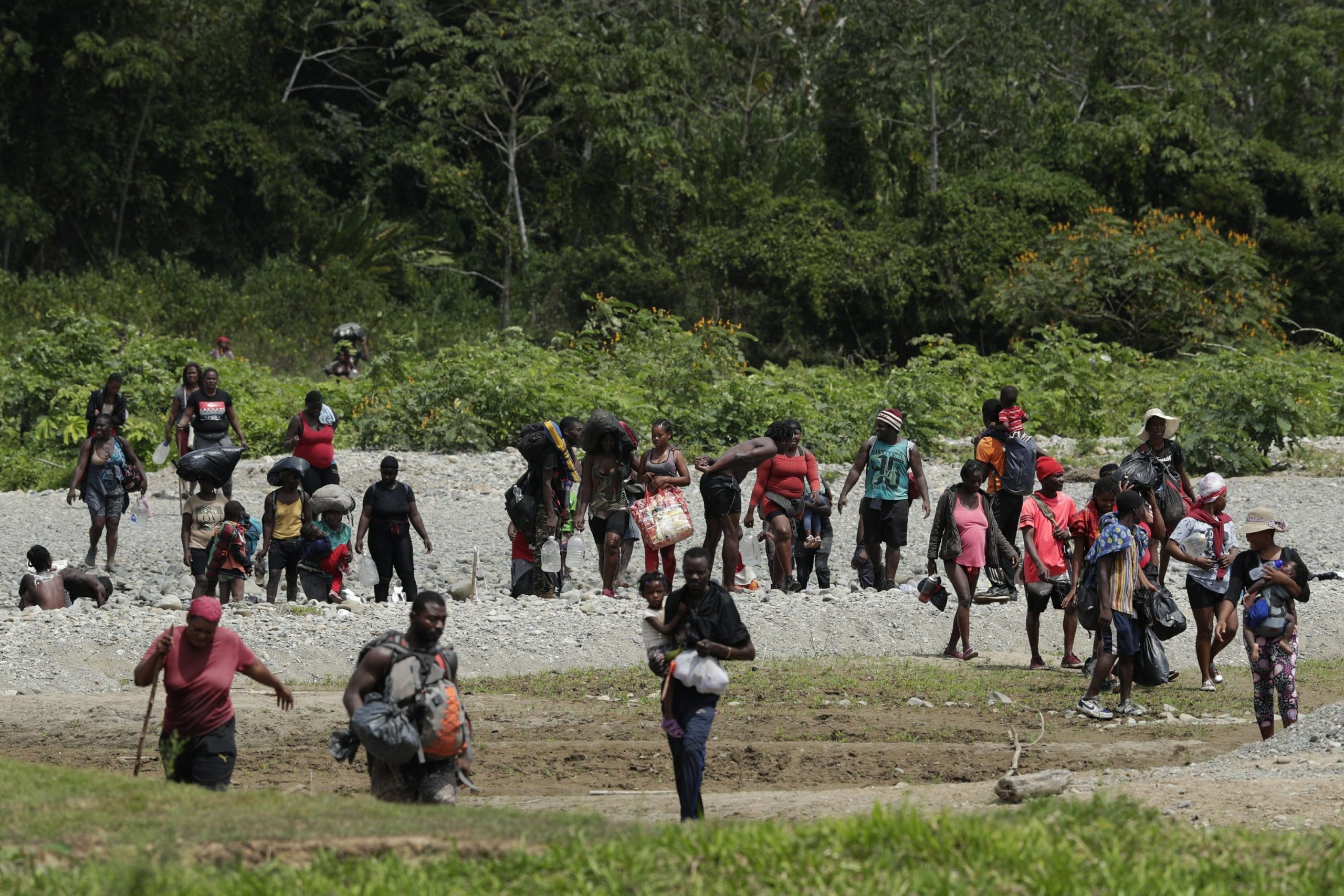 BAJO CHIQUITO, Panama (AP) – Several hundred migrants arrived in this indigenous village on Wednesday in the heart of the Darien jungle, on the border with Colombia, in the reactivation of that risky flow in times of pandemic.

Pregnant women, with babies in their arms, children and others carrying bags on their heads – obviously exhausted – first crossed a river that passes by the side of the village after leaving the bush. Then they went up a ravine until they arrived and were received by border police who made them form a line to register.

Bajo Chiquito is the first town that migrants encounter after crossing a lawless jungle for several days, infected by assailants, human traffickers and drugs. To get there from the nearest highway it takes up to six hours by boat on two rivers whose water levels are low due to the dry season. There the migrants register and must wait for the migration authorities and the police to let them go to other camps in Darien.

The National Border Service or border police said that 287 migrants entered on Wednesday, part of a large group that arrived days ago on the Colombian border. In the Darien camps there were just over 1,000 as of Wednesday because the new entrants join groups that were already stranded since last year by the pandemic. Since the end of January, the displacement of migrants from Darién to the border with Costa Rica has also been reactivated and more than 500 have already been mobilized.

Kerline Mervilier, 29, immediately jumped into line and fell asleep complaining of leg pains. She arrived with her boyfriend, Isaac Cadichon. He said that he left Haiti in December 2019 for Brazil, but that in that country he was left without a job in a beauty salon.

“I hope to get to a destination where I can get a job,” she told The Associated Press, holding her and her boyfriend’s passport. “My country is a tragedy and it forces us to seek a new life. We had to climb mountains. They assaulted me and took $ 160 from me while I was walking ”. He assured that his 66-year-old mother lives in New Jersey.

The heartbreaking image of migrants crossing the Tuquesa River, which passes next to Bajo Chiquito, has been reiterative in the last decade, but this time the flow takes place in the midst of the coronavirus pandemic and after Panama reopened its land borders at the end of January after having closed them in March after the arrival of the pandemic.

Now again the testimonies of migrants are heard that they see dead people on the way, including pregnant women, who could not follow the hard journey through the hot and humid jungle. Authorities did not immediately confirm those reports.

The migrants, many of them Haitians who left their impoverished country in recent years to seek work in South American nations, aim to reach North America in search of work. Now some are encouraged by the possibility that a new government in the United States can help them in that complex endeavor.

Mervilier said he had a message for the president of the United States, Joe Biden: “Help the migrants, help us to leave Panama for other countries.”

In Bajo Chiquito there were already more than 600 migrants and groups continued to arrive from Colombia every day. Travelers set up dozens of multi-colored tents to one side of the border police station and a basketball court. In a tent, there was a Haitian woman who complained of pain because she had a wound that had been made in her leg while crossing the jungle.

A good part of the migrants are Haitians, although they also come from Cuba and Venezuela, as well as from African and Asian countries.

Venezuelan Eligio Alberto Civil Hernández, 38, arrived with six friends earlier this week after crossing the jungle in five days. He said he wants to get to the United States, where some guys live. “In Venezuela you cannot honestly live now,” he said.

“I do it for my family, just for her,” he said, crying. “We need that help. Our people are dying ”, alluding to the support that the new president of the United States can give to migrants.

Most of the migrants arrived in Bajo Chiquito without masks and at the border police station their temperature was not taken upon arrival nor were they given masks. Nor was social distancing respected.

Civil Hernández, the Venezuelan, said that he did not wear masks and that for him there was an evil worse than the coronavirus. “I’m more afraid of hunger,” he said.