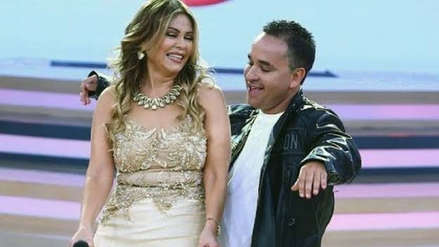 Former soccer player Roberto Martínez married television host Gisela Valcárcel in 1995 in the middle of a wedding broadcast by open signal and after a sound romance.

In an interview with the "You are in all" program, the former University captain confessed to feeling sorry for the end of his marriage with the 'Little Man'.

"And yes, I regret that having everything to succeed in our marriage, we did not. And yes I think it was a mistake and I told her publicly, I think she shares it, it was a mistake that we got married Gisela, Roberto and people, that is, we married the public, "he said.

The media overexposure of the relationship between Martínez and Gisela, confirms the former soccer player, greatly affected the marriage.

THE END OF YOUR RELATIONSHIP WITH MELISSA LOZA

Roberto Martínez and Melissa Loza maintained a long relationship until, in 2010, they separated. According to the businessman, the model did not want him to participate in "The Great Show" (conducted by Gisela Valcárcel) and gave him an ultimatum.

"I didn't want him to go to 'The big show'. Until one day I clarified that I was going to go anyway and he threatened that if I did, I would leave the house. I saw her taking my clothes out of the drawers, I thought that it was a joke and it was true, "he told" Trome. "