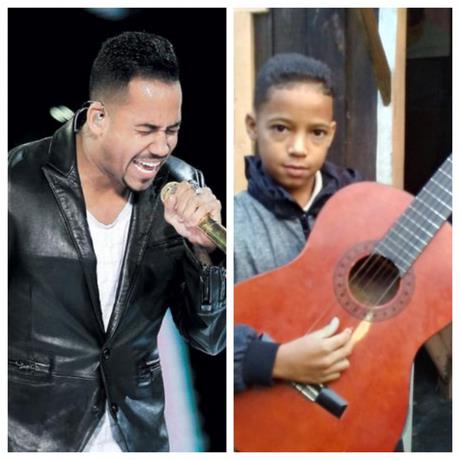 Odalí Ferreras is only 10 years old. A very early age perhaps, to discern between bad or good music. However, this child, this decade of life has allowed him to have enough experience to know why he is an inveterate fan of Romeo Santos. “It's that Romeo is a complete artist, who sings with a lot of feeling. And I like his style. ”

Surprising your answer, right? Well, as it is amazing, it is the way in which this boy from Constance plays the guitar and sings bachata. Even with the instrument on your back you can reach the musical notes.

Like a bachatero, he makes complicity with his guitar to play songs by his favorite artist, which, as already said, is Romeo, as well as Anthony Santos, Frank Reyes, El Chaval and others of the genre whom he defines as his inspiration.

His family is poor, but his dreams go beyond the need. Odalí dreams of being a great artist, and above all, to be able to sing with his idol one day. “My dad is going to take me to see him on Thursday in La Vega, I'm crazy that the day comes and I hope I can even say hello. I want you to sing a Chinese with Romeo, ”says the youngest boy who started playing at six years old.

He is satisfied that in one of the videos he has posted on the Instagram of his father Ramón Ferreras, where he sings the song 'I stay' by Romeo and Zacarías Ferreiras, the star of the bachata, he has put a comment that says: "God bless you." But they saw him some time later because by then his mother, Elizabeth, was very sick. Three months ago he passed away.

His family and his beginnings in music

Odalí is barely recovering from his mother's death due to pneumonia. His father tells us that in these three months in the orphanage it has been the music that has helped the boy calm the pain. "We are going to church, there he sings, and the company of his guitar has given him strength to continue." He only has one sister, his name is Odaliza.

Both he and his parent say proud that despite everything, grades at school have not dropped. Odalí is a meritorious student, and very dear to his classmates.

It is his charisma that has made many come to enjoy his talent, which he has cultivated thanks to the teachings of his father, who also plays the guitar and occasionally sings with his son.

Although only 10 years old, Odalí is aware of his reality.

“I would like to study music, but we have no money and here in Constance there is no where to study it, but I would love to be a great artist like Romeo, with that style he has. And with songs like those of now, which I like too much, ”concludes this little fan who only has the talent that life gave him and dreams, which are still free.