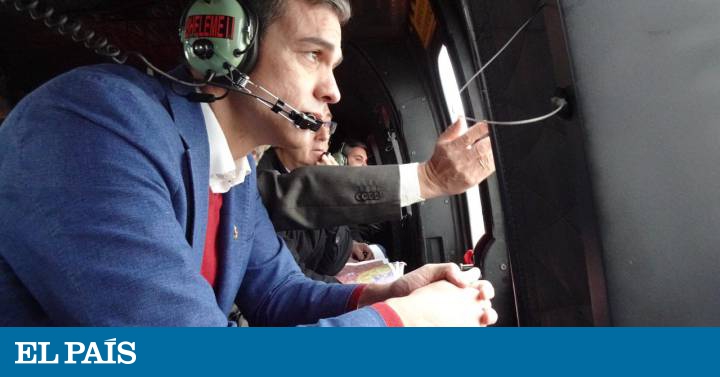 The president of the Government, Pedro Sánchez, has defended this Saturday in a clear and forceful way to his Minister of Transport, Mobility and Urban Agenda, José Luis Ábalos, on the diplomatic crisis opened after passing through the airport of Madrid Adolfo Suárez of the vice president Venezuelan, Delcy Rodríguez, last Monday. "The Minister of Development has all my political and personal support and support and has been very clear. He did everything he could to avoid a diplomatic crisis and he has succeeded." Sanchez has appealed that the opposition does not break the consensus in international politics in a situation "so complex" and has reiterated that in Venezuela what is needed are elections as soon as possible.

The president in charge of Venezuela, Juan Guaidó, recognized by Spain, the United States and 60 other countries, arrived in Madrid on Saturday afternoon to hold job interviews with the Foreign Minister, Arantxa Gonzalez Laya, with the leader of the PP in the opposition, Pablo Casado, and with the top popular leaders of the capital and the Community, Mayor José Luis Martínez Almeida and Isabel Díaz Ayuso. But Guaidó will not keep any appointments with the President of the Government, Pedro Sánchez, although in recent days, and during his European tour, he has had meetings with the German Chancellor, Angela Merkel, in Davos, with the Prime Minister of the United Kingdom , Boris Johnson, and with the president of France, Emmanuel Macron.

The President of the Government, Pedro Sánchez, has made his first statements about the controversial stop in Barajas last Monday of the Venezuelan Vice President during his visit on Saturday morning to the areas affected by the Gloria storm in the Region of Murcia and the Valencian Community. Asked by journalists, Sánchez has stressed that "the crisis is very complex" as has been proven even with the opposing positions of the two socialist ex-presidents, Felipe González and José Luis Rodríguez Zapatero, and that they face a solution to it " will require dialogue and implement measures for elections as soon as possible in Venezuela. "

The socialist leader has stressed that Spain pursues in this case the idea of ​​"leading through European institutions a dialogue response for a prompt solution and elections in Venezuela" and recalled that the opposition leader, Leopoldo López, is still housed in the Spanish embassy in that country with what has reaffirmed that its Executive "has always supported the Venezuelan opposition." Sánchez has reiterated several times that what Spain is looking for in Venezuela is that free elections can be organized as quickly as possible "so that Venezuelans can decide their future."

When the president has been asked specifically about the role played in the early hours of Monday by his transport minister during his stay at the Madrid airport, Sanchez has backed Ábalos, who is one of his main collaborators since the beginning of his career in the PSOE and now in the Government. The president said that the only thing Ábalos tried was to "put everything in his power to avoid a diplomatic crisis and he has succeeded." And later repeated: "He put all efforts and managed to avoid it [the crisis], what is the reproach?".

In what has not entered the president has been to explain the different versions that Ábalos himself has offered in such a few days about that meeting and his contact with Rodriguez. At first he said he had no meeting with the vice president of Nicolás Maduro, after it was hardly a greeting and later assumed that he saw her inside the plane in which he was traveling, at the request of the Minister of Tourism of Venezuela, to which he I knew before, but to warn her that she shouldn't get off the ship and step on Spanish soil because she was at risk of being arrested. Delcy Rodríguez is one of the Venezuelan leaders designated by the United States and the European Union as the main responsible for the serious situation in Venezuela and which has been prohibited from touching the European Union. Ábalos has spent these days denying having had the meeting to minimize it with nervous breakdowns before journalists who have asked about it.

President Sánchez has wanted to highlight in his open defense of Ábalos, after several days of silence about this conflict, that in a critical scenario again the opposition has not given him any support. "We should be talking among the different political forces that elections can be organized as soon as possible in Venezuela," he said. And he appealed that the opposition, which has strongly grasped this controversy to wear down the Executive, would have to lend itself to a "dialogue and consensus for a State policy to help among all of Venezuela's society find a solution to this crisis that leads suffering many years. "

The head of government regretted the type of opposition that has also been launched in the face of this crisis and noted: "It is the opposition we have, which uses the pain of the Venezuelan people."

On the other hand, the affected minister, José Luis Ábalos, has intervened in the morning of this Saturday in a political act in Galicia and, although he has not referred directly to this conflict, he has approached it in what he assumes according to his criteria attacks against his person as secretary of Organization of the PSOE and one of the main political collaborators of Sánchez. Ábalos has recognized that he is spending a few days "weird" and "annoying" and connected all the attacks he has received with his long career in the socialist party as attempts to undermine his credit on the one hand and on the other that he does not talk about the achievements approved by the new Executive in the three Councils of Ministers held so far.

"Others may be in the politics of passage. No, I came to stay and nobody gives me," said Ábalos, who spoke this Saturday shortly before Sanchez spoke, in the national committee of the PSdeG-PSOE in Santiago de Compostela . At no time has he mentioned Monday's incident directly, but implicitly when he confessed how he feels in these days when he is being the epicenter of the opposition's criticisms: "Anyway, it bothers, but it doesn't impact me. You know why? Because I come from far away, in this I have been since the year 76 ".

The PP, however, has not released this controversy and continues to attack. The popular number two, Teodoro García Egea, has pointed again against Ábalos and Sánchez this Saturday during a visit to Ibiza: “Today the Ábalos case is the paradigm of a government that advances day by day in a lie.” He criticized that the minister did not communicate to the authorities that Vice President Rodríguez "was treading Spanish and European soil" against what is prohibited and has asked rhetorically: "What does Sánchez de Maduro fear, what does the Venezuelan vice president fear, what do they know about them? Venezuelans so they have to protect a person whose entry is prohibited in the EU? "

The PP has requested the urgent appearance of the Interior Minister, Fernando Grande Marlaska, to explain what have been the procedures that have allowed Ábalos "to enter the Barajas authorities room, get on a plane and meet a lady who has it is forbidden to step on Spanish soil. ”Egea added:“ We want to know if the Minister of the Interior has collaborated in this lie and this argument of the head of Development and if Pedro Sánchez agrees with all these lies. ”