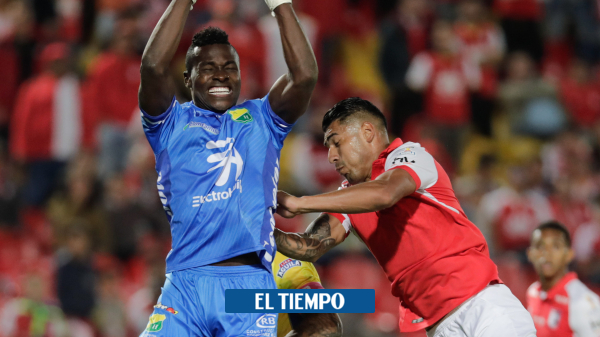 Finally the anguish and despair that had been absent from Santa Fe reappeared. Finally the bow was closed and the team, no matter how hard they tried, by all means, did not find the goal of victory. He was looking for his eighth consecutive win, but he drew with Atlético Huila, 0-0 at El Campín.

The team, in any case, was a steamroller. He made plays by the bands, from the center, from above, from below. Duque topped, tried Sambueza, Velasquez approached, and in each attempt they met the Banguera archer, who knows them well and was determined to draw his bow in zeros.

The archer was in his night, and the players of Santa Fe lost that duel. As in that great header of Sambueza in the first part that was not a goal because of the agile Banguera. The flyer had at least three scoring opportunities and could not.

Huila just waited, to prevent the steamroller from passing him. And from time to time he put in some fierce counterattacks, taking advantage of cardinal carelessness, which clashed with the humanity of Castellanos, also of great performance.

Santa Fe was running out of time. He lost depth and entered into a chaotic attempt at victory. Sambueza failed again, who fought as much as he could. Anselm entered the end to be the hero and earn a place, but his header went slightly off.

It was a match that was entangled to the cardinals. 8 games passed for that situation to present itself. I add one more point, which is valuable, reached 24, still in the fight, but got tangled up with the less expected opponent.

Goals: there was not.

Expelled: there was not.