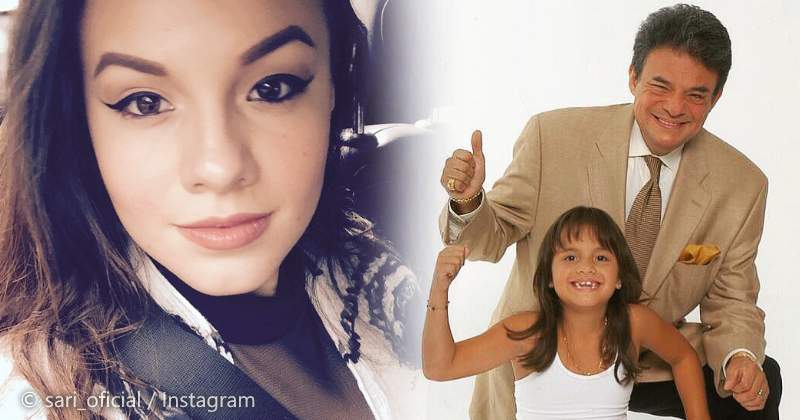 Sarita Sosa Salazar is the daughter of the late José José and his third and last wife, Sara Salazar, whom he married in 1995.  She is currently 25 years old and defines herself as a singer and songwriter, according to her instagram profile.  She has been in controversy because her half brother José Joel and half sister Marysol from another marriage accused her of “kidnapping” her father without consent before José José died of pancreatic cancer in September 28 2019

In 1995, after rehabilitating himself, the star of romantic music, José José married the Cuban Sarita Salazar, who was his wife until his death, on September 28, 2019. With the woman who rescued him from the street and helped him to leave behind his addiction to alcohol, he had his youngest daughter, Sarita Sosa Salazar. On July 22, 1995 they receive the little girl. “Sarita is a miracle girl,” said José José’s third wife.

At 24, Sarita is already a married woman and mother of a girl. It was also who took José José under his care, when the artist abandoned his treatment in Mexico in February 2017, after the operation in the pancreas that supposedly left him free of the cancer that afflicted him. Although her sister Marysol accused her of having her father kidnapped, she assured that everything was done according to the will of the artist.

As reported, Sarita was she who was with her father at the time of his last sigh and who would have asked him to follow in his music. In the middle of her duel, the young woman has been in the eye of the hurricane, for multiple reasons.

After the death of José José, his youngest daughter, Sarita Sosa Salazar, has monopolized the attention of the media by giving most of the information about the singer and by his differences with the older children of José José, Marysol and José Joel by the fate of the deceased singer’s body. The young woman indicates in her social networks that she is a composer and singer. She also grew up with her half-sisters, Celine and Monique, both daughters of Sara Salazar from a previous marriage.

In 2014, at age 18, Sarita married the Guatemalan Jimmy Ortiz in Miami, where he has lived for some years and where they received their firstborn.

The couple has a beautiful girl, whom Sarita calls in the Aydan networks. Apparently the little girl likes to sing. His mother says in the following post, that he sings the songs of his grandfather, José José.

Sarita Sosa Salazar As a Mom

The youngest daughter of the “Prince of Song” sings in the choir of the Christian church she attends with her family. WHAT DOES IT MEAN, so don’t sing professionally if you do it often praising God. She has often organized trivia about her father on social media, where she sang some of her successes and the winner obtained an autograph and a greeting from her father.

In 2018, Marysol and José Joel accused that Sarita had “kidnapped” her father and took him without consent to Miami, after becoming known that he was suffering from pancreatic cancer. Some time later, José José released a statement in which he clarified that he was not kidnapped and was well thanks to Sarita’s care.

In February 2019, the former manager of the singer, Laura Núñez, accused Sarita Sosa of persuading her father to transfer the royalties from her work.

“He keeps everyone, nobody works there, Sara is the one who made him sign and she keeps everything. They do not work, it is not greed, because if you need to pay the bills (bills) and your husband does not work, then you have to grab your dad’s, ”explained Nunez.

Below we can see Sarita singing in English, on her YouTube channel.

Sarita also sings Christian music, as we see her in the next post she shared on her Instagram account. She wrote: For many years I am singing in churches but I have never shared anything. It has been a beautiful experience to serve you. I hope I ministered to you the song as you have ministered to me.

What does Sarita’s husband Jimmy Ortiz do?

The marriage formed by Sarita and her husband Yimmy Ortiz, has sung in the Christian church to which they belong on several occasions, however, they have not formally entered into the world of entertainment.

The young people met when Sosa was 18 and Ortiz 24, both worked in a car wash, according to press reports, adding that young people were already hunting opportunities to make their own music.

José José’s daughter married the man of Guatemalan origin on June 3, 2014 in a Christian temple in Miami, meaning that by 2019, they already have 4 years of marriage. For what can be seen in Ortiz networks has been fully dedicated to his musical career.

On the Internet Ortiz, he identifies himself as a “musician, actor, activist, vegan chapino (as the Guatemalans refer to themselves) and a proud husband and father.

In the Instagram of Sosa’s husband, Jimmy Ortiz, he has few publications and several are showing his talent as a musician, as he exhibits himself playing guitar in a musical studio with professional recording equipment. There are also some of the presentations with a Christian music group where Sosa serves as a singer.