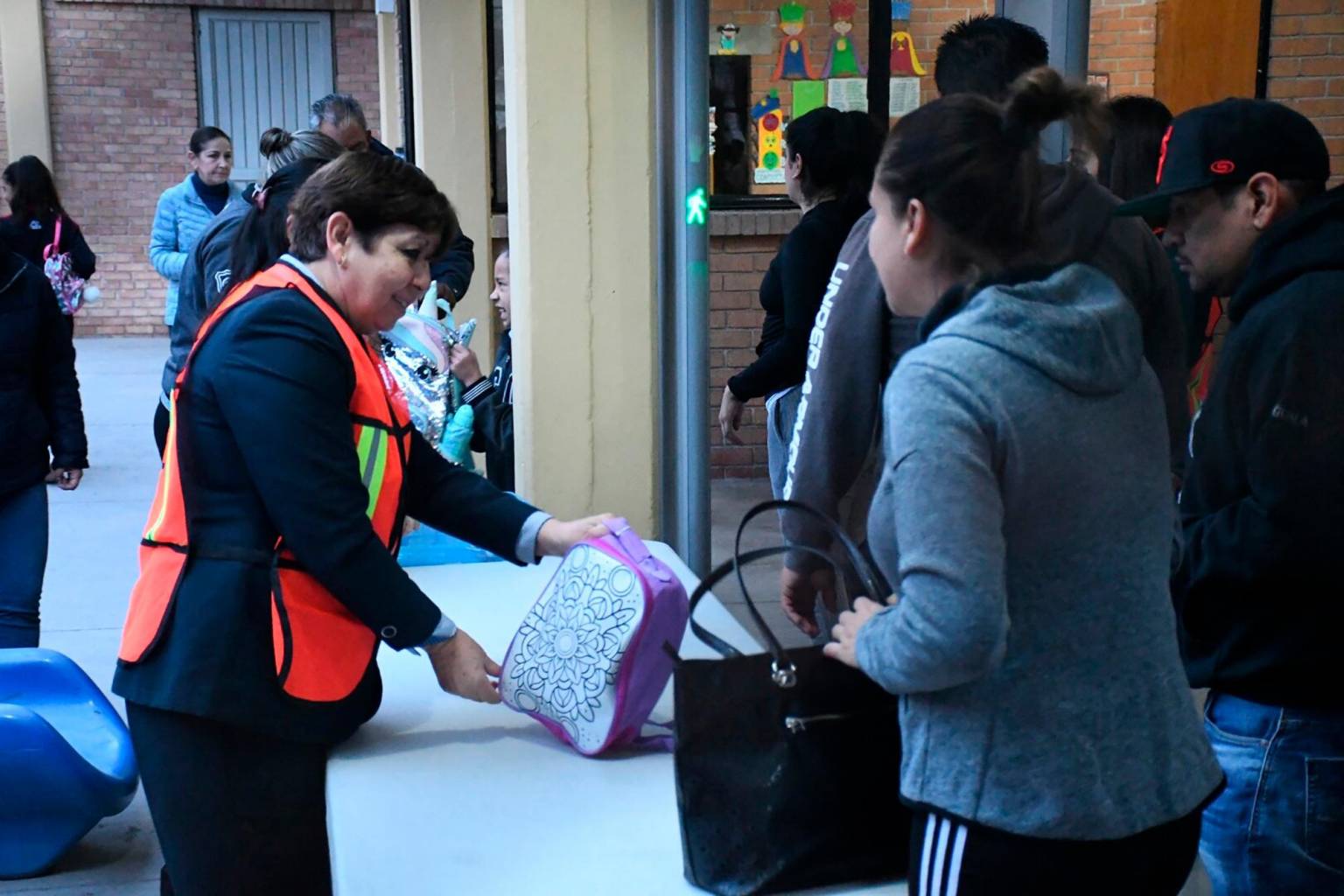 The macabre shooting in a private school in Torreón, in the northern state of Coahuila, which left just six weeks ago injured and ended the life of a teacher and the author of the crime, 11, has revived the controversial Mochila operative Safe.

In the Spain School, next to the public institution where the shooting took place a week ago, they started the Mochila Segura operation last Monday in the same way as in more than 3,200 schools throughout the state.

Manuel Iván Botello, director of this educational center, said that the operation is carried out without stopping 'normal activities' and in a 'working day the same' as usual.

Parents or the teachers themselves are responsible for checking their children's backpacks before entering school.

On the first day, there were the presence of Army agents, the State Police and even dogs detecting dangerous substances.

"Here the review is done by teachers and parents, in compliance with the protocols that each school has, we fully respect," said the regional coordinator of Public Safety Laguna Region, Adelaido Flores.

Although he has received criticism in the past, after the tragedy in this northern city -which ended with the arrest of the grandfather for having these weapons, without permission, which the minor used- there are mothers who support this operation to be carried out permanently .

'It is not once a month the backpack operation. It must be every day. Once it's like telling the person when not to bring things, right? What I'm going to use! 'Said Mother Perla Cecilia Ramírez worried.

Other parents considered that regardless of the Safe Backpack operation, good communication with the children should be established.

'The boy lacked attention. (The problem) comes both from home and from school. It is an unfortunate event. But, we have no choice but to pay more attention to our children, 'said Luz Adriana Zacarías, another mother.

This Friday, when one week after the tragedy, the Cervantes School reopened its doors after the installation of metal detectors and the students' obligation to carry out transparent backpacks.

A program wrapped in controversy

This spooky event – which has reminded us of the Columbine (USA) massacre of 1999 – has revived the Safe Backpack program, which was created in 2007 at the federal level and allows us to review the belongings of school sites in search of elements dangerous as toxic substances or weapons.

It was from this date that this operation, which was part of the Safe School Program (2012-2016), began to be implemented in several schools, and although it has received many criticisms, it is still being carried out in educational centers in several states.

This same week, in the southern Guerrero, one of the most dangerous regions of the country, this backpack review operation was reactivated in 50 schools, within the Safe School 2020 Program, state security sources reported to Efe.

In Ecatepec, on the periphery of Mexico City and one of the most dangerous municipalities in the country, this program is also applied, for example.

'It is a misleading response (from the Government) because it does not resolve security issues. In Mexico it has been used for a long time and has shown its inefficiency in real terms, 'said the director of the Network for Children's Rights in Mexico (Redim), Juan Martín Pérez García, in an interview with Efe.

For the childhood expert, most crimes happen 'outside of schools' and mostly by adults. "Children are the victims and not the perpetrators," he added.

That is why Redim said that reviewing infants' backpacks was an 'act of authority violating human rights for discriminating by age and violating the privacy of the student population'.

In July 2019, the National Human Rights Commission (CNDH) sent a recommendation (48/2019) to the Ministry of Public Education for the human rights violations caused by the Mochila Segura operation.

As a result of the event, this week Mexican media reported that the Supreme Court of Justice of the Nation (SCJN) will review whether the Mochila Segura program is constitutional after the Court notified on January 9 that it will resume the review of an amparo promoted in 2017 by parents of two schools in Mexico City.

In their lawsuit, the parents argued that the presence of police officers in schools frightened their children and that the review invades their privacy and violates Article 14 of the Mexican Constitution that states that 'no one can be deprived' of their possessions if it is not by 'trial followed before the previously established courts'.

Also on Monday, the head of the Ministry of Public Education (SEP) of Mexico, Esteban Moctezuma, said that the recommendation of the current Mexican government is that 'the review of the backpacks is done by fathers and mothers in the school'.

'Our interest is to know what enters the school. But there are parents who do not necessarily review what they enter the school, 'said the official.

On this issue, López Obrador just said Monday: 'It's nothing more than Safe Backpack. We are moving towards a better society, material well-being, soul welfare, strengthening of values, cultural, moral, spiritual, that families do not continue to disintegrate. This is very important, address the causes. '