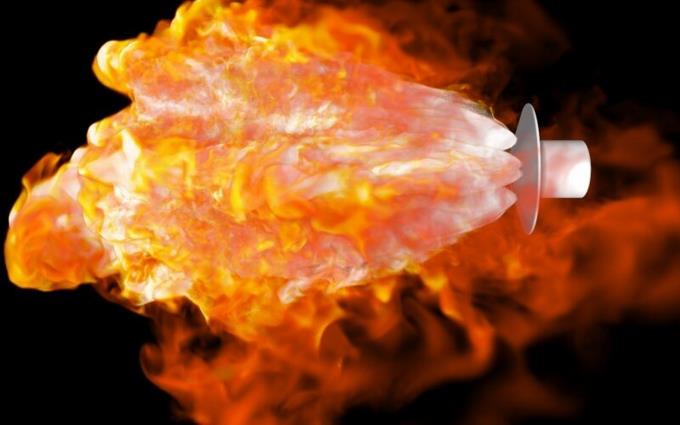 Summit, the fastest supercomputer in the world, located in the ORNL (Oak Ridge National Laboratory) is being used to simulate the back propeller to land humans on Mars.

The type of vehicle that will take people to the Red Planet is emerging to be "like a two-story house that is trying to land on another planet. The thermal shield on the front of the vehicle will be just over 16 meters in diameter, and the vehicle itself, during landing, weighs tens of metric tons. It is huge, "explains Ashley Korzun, aerospace research engineer at NASA's Langley Research Center.

"You can't use parachutes to land very large loads on the surface of Mars," Korzun said. "Physics simply breaks. You have to do something else."

NASA expects humans to travel to Mars in the mid or late 2030s, so engineers have been at the design table for some time. Now, they have a promising solution in retropropulsion or motor-driven deceleration.

"Instead of pushing it forward, the rear propel engines slow it down, like the brakes," Korzun said. "We can demonstrate quite revolutionary performance at Summit in relation to what we were used to with a conventional computing approach," said Eric Nielsen, senior researcher at NASA Langley and who leads the trials.

The team uses its computational fluid dynamics (CFD) code called FUN3D to model the Martian descent of the vehicle. CFD applications use large systems of equations to simulate small-scale interactions of fluids (including gases) during flow and turbulence, in this case, to capture the aerodynamic effects created by the landing vehicle and the atmosphere.

"FUN3D and the computing capacity itself have completely changed the game, allowing us to move forward with the technological development for the rear-propel, which has applications on Earth, the Moon and Mars," Korzun said.

The Martian atmosphere is approximately 100 times thinner (less dense) than Earth's, resulting in a rapid descent of the orbit, approximately six to seven minutes instead of the reentry time of 35 to 40 minutes for Earth .

"We cannot match all the relevant physics in tests on land or in flight on Earth, so we rely heavily on computational capacity," said Korzun. "This is really the first opportunity, at this level of fidelity and resolution, that we have been able to see what happens to the vehicle as the speed decreases with the engines running."

During the rear-wheel drive, the vehicle is sensitive to large variations in aerodynamic forces, which can affect engine performance and the ability of the crew to control and land the vehicle at a specific location.

The team needs a powerful supercomputer like the 200 petaflop Summit to simulate the entire vehicle while navigating a variety of atmospheric and engine conditions.

To predict what will happen in the Martian atmosphere and how the engines must be designed and controlled for the success and safety of the crew, researchers must investigate unstable and turbulent flows on scales of length and time, centimeters to kilometers and fractions of second to minutes To accurately replicate these distant conditions, the team must model the large dimensions of the landing module and its engines, local atmospheric conditions and engine conditions along the descent path.

At Summit, the team is modeling the landing module at multiple points in its descent from six to seven minutes. To characterize flow behaviors at speeds ranging from supersonic to subsonic, researchers execute sets (individual simulation sets) to solve fluid dynamics at a resolution of up to 10 billion elements with up to 200 terabytes of information stored per execution. .