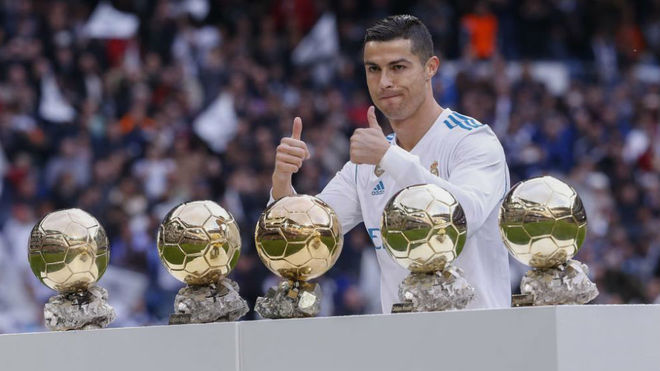 Serie A The Italian press takes it for granted and France Football, the medium that grants it, does an interview

An interview in France Football just over a month to meet the next winner of the Golden Ball have triggered comments. Cristiano Ronaldo Golden Ball? And the fact that it appears on the cover of that medium, which is the one who grants it, has sown doubt, especially in Italy.

In fact, in Corriere dello Sport it is ensured that the Portuguese will win his sixth Golden Ball, which would exceed the five that Messi also has. We will still have to wait to know who will be the new winner, but, logically, both the Portuguese and the Argentine go back into all the pools in a trophy that both have been distributed in the last 10 years, except the last one that was for Modric.

Cristiano Ronaldo reviews the best 700 goals he has scored: CR 700

There is another player who could fight with them, since he has conquered the Champions League and has been chosen as the best footballer in the Premier League, but he has the problem that he plays as central, so his options decrease. It is the case of Van Dijk. However, it does not give the impression that he can overcome Cristiano or Messi in this tremendous struggle that both have been leading for more than a decade.

The press in Italy sees Cristiano as the winner, who, in advance of the interview with France Football, has claimed his current state of form despite the 34 years: "It is necessary to be intelligent to last. My goal is to keep young as I get older and therefore competitive. Tell me a player who has as much performance as I do at the same age and in a team like Juventus. "

And about Messi, his great rival, he says: "At 19-20 I realized that football was numbers, titles, records and goals. The rivalry with Messi allowed us to be better and have more performance. From a certain point of view , it was a healthy rivalry. " And it still follows. We will have to wait to know who takes the coveted trophy in this case.