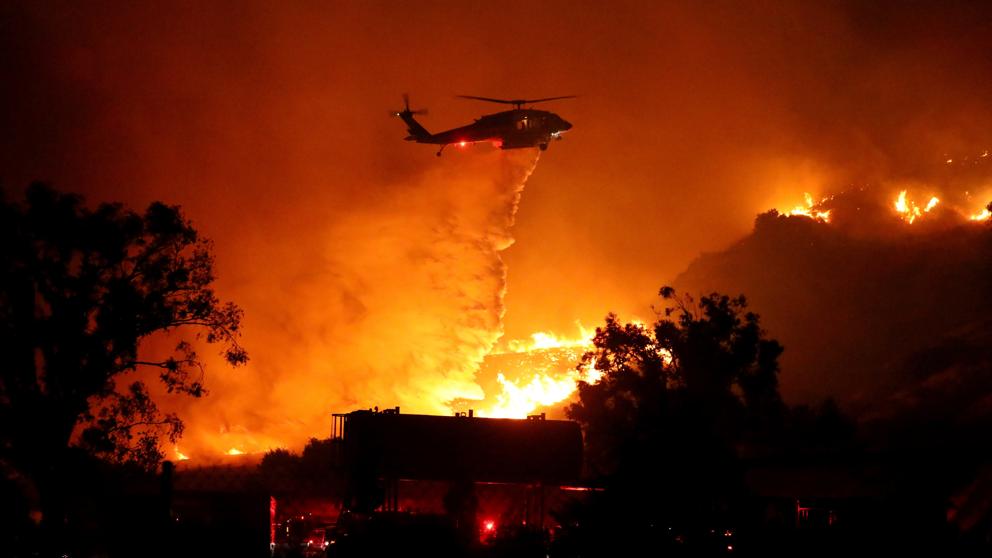 Authorities ordered mandatory evacuations for thousands of people while crews worked overnight to contain the so-called sandalwood fire, which had razed nearly 500 acres near Calimesa, about 70 miles east of downtown Los Angeles.

The fire, which is named after a local landmark, broke out Thursday afternoon when a garbage truck threw burning garbage that spread over the vegetation, said the RCFD and the California Department of Forestry and Fire Protection, or Cal Fire, in a statement.

Earlier Friday, a second forest fire in southern California, called the Saddleridge fire, spread to more than 4,000 acres in the San Fernando Valley north of Los Angeles, prompting an evacuation order for more than 1,900 homes

"Once daylight comes, a more accurate assessment can be made," the Los Angeles Fire Department said in a Twitter message before dawn. "Several houses have been destroyed by fire, but the estimated number is not available at this time."

The worst forest fires in California were recorded last year

The 2018 wildfire season was the deadliest and most destructive ever recorded in California, with approximately 100 residents and firefighters dead. More than 8,500 fires broke out, burning more than 1.8 million acres and causing billions of dollars in damage.

There were no immediate reports of deaths or injuries caused by the latest fires, among some 275 forest fires that have exploded in California as warm and gusty winds signaled the beginning of their high fire season, state officials said.

Hundreds of people have been evacuated
(Michael Owen Baker / AP)

Authorities called bulldozers, helicopters and other heavy equipment to fight the Saddleridge fire, which threatened houses in Sylmar, the northernmost neighborhood of Los Angeles. Firefighters have been able to quickly contain most of the other fires that erupted in California in recent days.

The risk to life and property led Pacific Gas and Electric Co to cut off the electricity supply to some 730,000 customers, a measure that California governor Gavin Newsom attributed to years of poor administration by the utility.

Late Thursday, PG&E announced that it had restored power supply to more than half of those affected, and approximately 312,000 were left without power.

PG&E filed for bankruptcy in January 2019, citing possible civil liabilities of more than $ 30 billion of the major forest fires linked to its transmission cables and other equipment.

As the winds moved south, Southern California Edison was making a similar cut, which warned more than 173,000 customers that they could lose energy.

The California Highway Patrol closed parts of US 210, and local media reported that several motorists were stuck on the interstate highway due to the fire.

Much of northern California, from San Francisco to the Oregon border, remains under a “red flag” state fire alert.