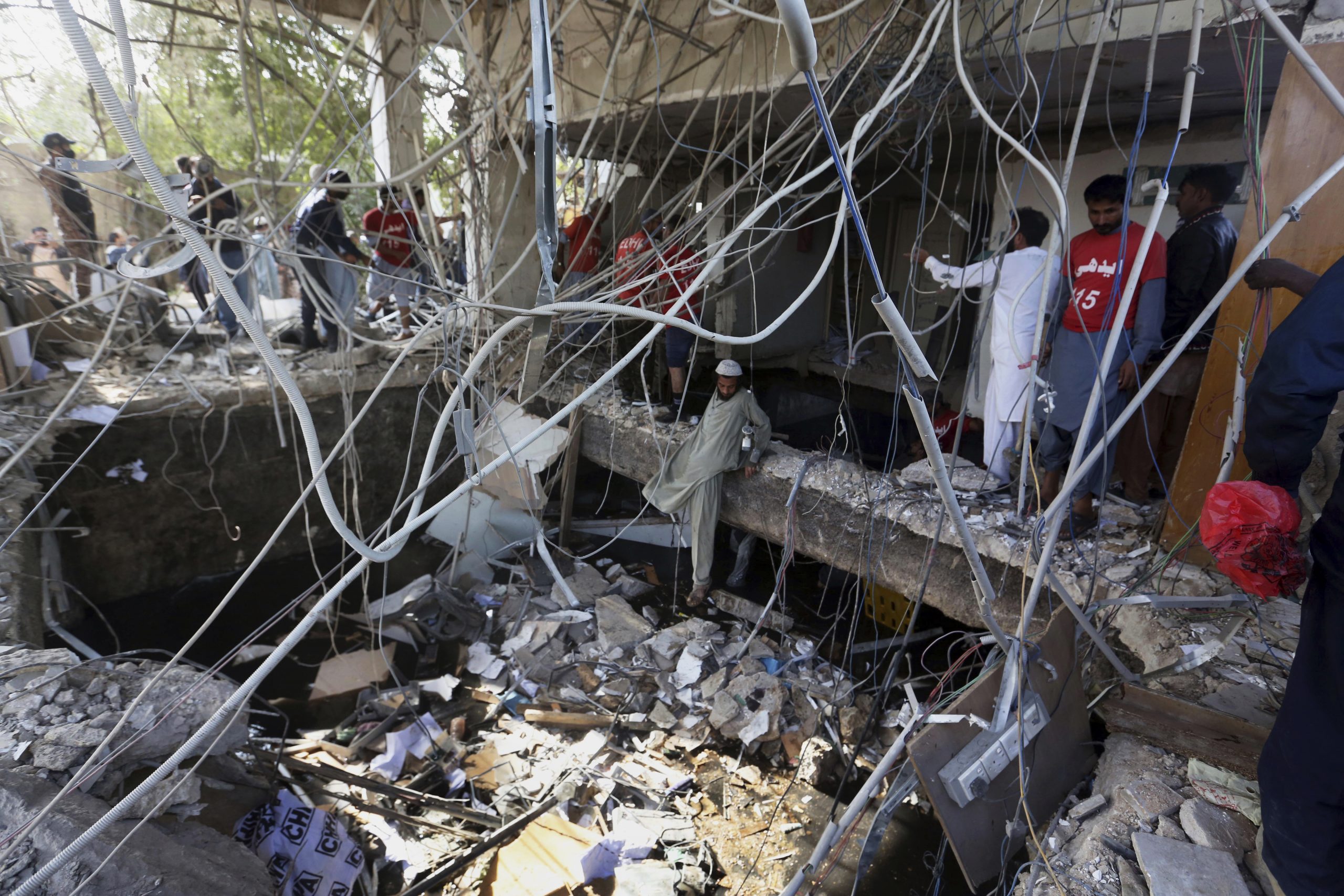 KARACHI, Pakistan (AP) – A powerful gas explosion in the sewer system in Pakistan’s largest city on Saturday killed at least 12 people and injured 11 others, police and a health official said.

Police spokesman Sohail Jokhio said the explosion was apparently caused when something ignited gas that had accumulated in the sewer below a bank building in the Shershah neighborhood of the port city of Karachi.

The force of the blast destroyed the HBL bank building. Video images broadcast by local television channels showed that the entire structure of the Shershah branch was damaged. The floor disappeared and there was furniture immersed in the sewage accumulated below. The impact of the blast damaged several cars parked nearby and threw debris into a gas station on the other side of the building.

Jokhio said it was not yet clear what ignited the gas, but a team of experts was called in to investigate.

Doctor Sabir Memon, from the Karachi Traumatology Center, said that 10 people died and another 13 were injured, at least three in critical condition. Several injured were sent to the intensive care unit.

Police officer Sarafar Nawaz Shaikh later said that two of the wounded died at the hospital, bringing the death toll to 12.

Shaikh added that investigators were not ruling out the possibility that the blast was the work of extremist groups.

“We will have a clear version once the explosives experts complete their work,” he said.

Witness Mohammad Sameer said he was in the crowded bank branch, but had left shortly before the explosion. He explained that he rushed back to the damaged bank to rescue the victims.

“Thank God I left the place, otherwise I would also be among those affected,” he stressed.

Many sewer canals in the city have been covered, mostly illegally, due to the construction of concrete structures over them.

Mukhtar Abro, a local administrator, said illegal constructions over the sewer area where the blast occurred had received an eviction notice and the structures were planned to be demolished.

In the afternoon, a bomb, apparently planted on a motorcycle parked in a bazaar, exploded in the southwestern city of Quetta, killing one passerby and wounding four more, police said.

Senior Agent Fida Hussain said two of the injured were taken to a hospital in critical condition. No one has claimed responsibility for the attack.

Also on Saturday, military forces reported killing three fighters during intelligence operations in Khyber Pakhtunkhwa province, which borders Afghanistan. The statement did not provide further details on the two operations.