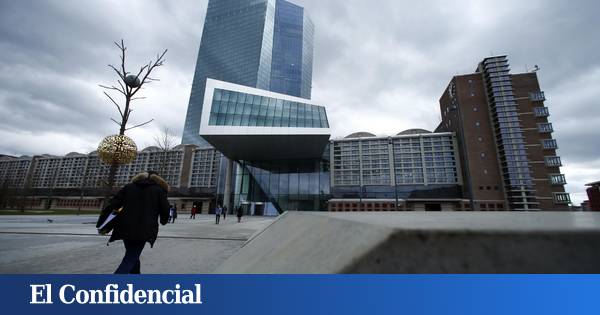 Six former members of the dome of the European Central Bank (ECB) have sent a letter to several Anglo-Saxon media on Friday criticizing what they consider to be an "extremely accommodating policy" as well as the intentions of the entity chaired by Mario Draghi to try to change the inflation target that marks the path of monetary policy. As they argue, "there has never been a risk of deflation," so the central bank's intentions to change what is considered as price stability, as well as the monetary policy itself, are "based on a misdiagnosis." In this context, the authors warn of the threat that these policies could pose for the independence of the entity. In the letter, the former bankers do not mention at any time the name of the Italian – famous for his "I will do everything necessary" speech in the midst of the euro crisis – but they do refer to the policies that he has been carrying out during his mandate.

The ECB lowered the interest rates of the deposit facility a little more than two weeks ago (now at -0.5%), while relaunching its quantitative expansion program

In the letter, the group claims to be "assisting the current ECB crisis with growing concern." "The ECB has been following an extremely accommodative policy during years of economic growth and price stability," says the letter. "The recent slowdown in economic activity, although seen as temporary by the ECB itself, and the risks of Brexit and the commercial war, have led the ECB to resume the purchase of assets and reduce what was already an interest rate of the negative deposit ". "In addition, the ECB has pledged to continue with this extremely accommodative policy for quite some time," underline the former bankers.

"The more the ECB stays in this extremely accommodating environment, the longer the negative effects will last," warn these six ECB records. "Interest rates have lost their effect and the risks of financial instability have increased," the authors of the letter explain. "If a crisis comes, it will have very different dimensions than we have been seeing so far."

If a crisis comes, it will have very different dimensions to those we have been seeing so far

In this sense, former bankers are concerned about the independence of the ECB. "Like other central banks, the ECB is threatened by the end of its control over money creation," he concludes. "These developments imply a high risk for the independent central bank – 'de jure' or 'de facto' -".

In fact, former bankers underline the program of quantitative expansion (QE) of the Draghi mandate, whose "logic" they do not understand, since, as they defend, "after years of QE, ECB purchases will hardly have positive effects on growth ". "The suspicion that under this measure is the intention to protect the highly indebted governments from a rise in interest rates is becoming increasingly founded," says the letter. "From an economic point of view, the ECB has already entered the territory of government financing, which is strictly prohibited by the Treaty (of Maastritch)."

The powerful central bankers have found the last of their shoe. Its monetary policy no longer gives almost results. They now appeal to governments to spend more

Just last week, the 'falcon' Sabine Lautenschläger announced her resignation from the ECB's dome, giving rise to speculation by internal divisions within the dome of the monetary regulator after Draghi announced the return of the QE. This week, Allianz CEO Oliver Bäte expressed his dissatisfaction with Draghi's statements in an interview with the Financial Times in which the Italian encouraged the eurozone governments to take advantage of the fiscal stimulus.

"We created independent central banks precisely to avoid this, so that central banks did not print money," Bäte defended against the Financial Times itself. "(People) say that Draghi is independent. It is not."

In this context, one of the main concerns of the signatories is the ECB's intentions to change the inflation target. As the minutes of the monetary meetings of this year are already advancing, the ECB is studying whether it should modify what is understood by this parameter. The ECB's mandate is clear: maintain price stability, close to but below 2% in the medium term.

However, with an inflation of 0.9% (according to the September data), members of the monetary regulator are beginning to think about changing the nuance that inflation has to be below 2%, contemplating allowing it to exceed this threshold if necessary to combat inflation that is too shy, "as long as it converges again to our focal point in the medium term," Draghi explained in a June speech. A symmetrical understanding of the inflation target would give the central bank more scope to deploy its monetary policy without being so corseted by small inflation fluctuations.

The objective pursued by the ECB is clear: to maintain price stability. However, the market seems to have lost faith in the regulator's ability to keep his word

However, the six former bankers who sign this Friday's letter show a strong disagreement with these intentions. "In recent years the ECB has altered 'de facto' the definition of price stability by considering inflation of, for example, 1.5% unacceptable," they argue in the brief. "The ECB argued in 2014 that its 'ultra-lax' monetary policy was justified by the threat of deflation," said former regulators, who argue that, "however, there has never been a risk of entering a deflationary spiral and the ECB itself has been looking less and less threatened. "

"This weakens their vision that a higher inflation target is needed," former bankers settle. "Monetary policy is then based on a misdiagnosis – the frequently used argument that the ECB would be violating its mandate with low inflation is simply incorrect."

However, former bankers doubt that the ECB can win the credibility of its environment. "And coincidentally, after years of an unsuccessful inflationary policy, how does the ECB intend to convince the public and the markets that it will be able to stop inflation when it reaches certain levels by now?"