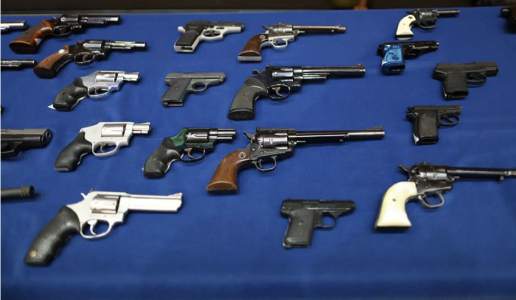 According to the indictment, which contains 11 charges and became effective today, those involved face “multiple federal crimes,” including conspiracy to sell weapons without a license, as well as the sale of the weapons themselves.

As part of a police investigation that ended in an operation, 68 firearms were seized, of which 30 were “ghosts” (no serial number), which makes monitoring very difficult if used to commit a crime, explained the Orange County District Attorney’s Office.

In addition, more than 2,000 ammunition of different caliber were intervened, along with an unspecified amount of methamphetamines. Among the seized weapons are several 12-gauge shotguns and others equivalent to AR-type assault rifles.

Between August 21 and September 18, the defendants had numerous weapons in their possession illegally and conspired to sell them. There are also a 40-gauge Glock pistol, a Savage Arms rifle and a 12-gauge Mossberg shotgun.

Read: Migrants block bridge between Mexico and the US

Pedro Javier Villalobos, 22 years old and resident in Santa Ana, was identified as one of the main leaders of arms sales.

Villalobos allowed other defendants such as Michael Delgado Rivera (aka “Player”), 38, a resident of Anaheim, and Rosenberg Jiménez (aka “Junior”), 29, a resident of Santa Ana, to sell weapons without having the proper license .

The names of the other defendants were not provided in the Prosecutor’s statement.

In September, Villalobos agreed to sell a firearm to a buyer who was actually an undercover agent. The next day, “at Villalobos’ house, Jiménez sold a Mossberg shotgun, a Spike tactical rifle and another AR without a serial number for $ 4,800 to the agent,” the indictment notes.

Some of the defendants such as Jiménez face additional charges by owning a weapon having been convicted of a felony.

Also, in his criminal history he includes illegal sexual relations with a minor and aggravated assault on a representative of the order.

A seventh defendant has fled.