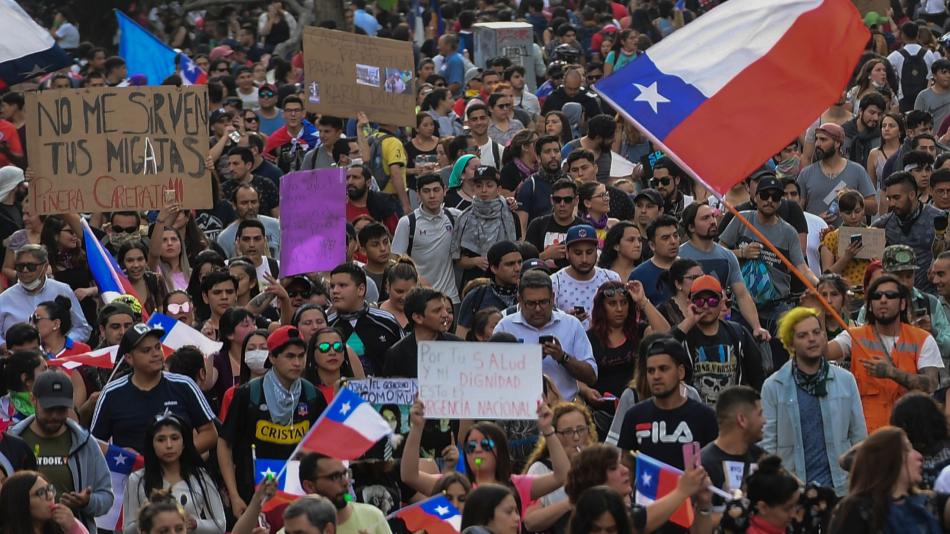 "Join the dance, of those left over, nobody is going to miss us, nobody really wanted to help us."

Thousands of Chileans have sung this popular song of The Prisoners to bristle the skin of citizens around the world amid protests against the government, and from which they demand urgent reforms to the economic system and greater social benefits. The demonstrations have been shaking the streets of that country for a week.

Citizens began to march peacefully against the increase in subway rates and demanding reforms of an economic system that they consider unequal. The marches have resulted in the largest social outbreak in Chile in three decades. So far, 19 people have died in the middle of the disorders.

(You may be interested: More than half a million people protest in Chile)

'The dance of those left over': the song against inequality

The rock group Los Prisioneros created the song 'The dance of those left over' in 1986, is part of their album Kicking stones, to express their social discontent and question social inequality and lack of opportunities in Chile.

“It's a strong album and it's a very different album from everything that was done at that time. That is one of the things that most impacted, ”recalled Jorge González, its author, in a self-interview conducted in 2014.

The lyrics of this song hopelessly illustrate the class differences between Chilean youth. During this time Chile was under an economic system imposed by the Chilean dictator Augusto Pinochet (1973 – 1990).

As the 1988 plebiscite approached, its music began to be affected by censorship, hardened after the group publicly declared its adherence to Option No.

The Dance of The Left Over – The Prisoners

Without seeking it, the Prisoners became a symbol of the fight against military repression and their message passed through ages and social segments.

More than 30 years later, Chileans have returned to sing this song turned into a hymn against injustice.

Faces uncovered, women and men singing at full throttle "they want money, the dance of those left over." What has to happen for us to see this on TV and be heard by the government. Insisting as a focus on violence, doubtful fires is myopia or perverse delegitimizing strategy pic.twitter.com/aiMDbJ83iY

This is the full letter

It's another night
of walking
it's another end of the month
no novelty
my friends stayed, just like you
this year they ran out, the games, the twelve games.

Join the dance, of those left over
nobody is going to miss us
nobody wanted to really help us
they told us when guys
play to study
Men are brothers and together they must work.

You heard the advice
the eyes on the teacher
there was so much sun
over the heads
and it wasn't that true, because those games in the end
they ended up for others with laurels and future
and they left my friends kicking stones