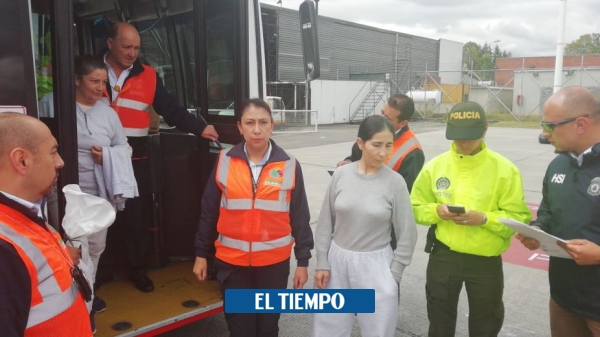 The Investigation and Accusation Unit of the Special Justice for Peace (JEP) called for the exclusion of Anayibe Rojas Valderrama, aka Sonia, who was deported in September last year to Colombia after serving a penalty for drug trafficking in the United States. However, this request unleashed an immediate controversy, as there are recent records that she, the first former guerrilla who was extradited, remains firm with her reinstatement process.

(You may be interested: Prosecutor of the JEP requests the expulsion of 7 former members of the Farc)

According to Senator Carlos Antonio Lozada, consulted by EL TIEMPO, 'Sonia' was last weekend in Montería, Córdoba, advancing the tasks to which he has been dedicated in recent months, related to the support work for the former members of the Farc who remain in jails in the country.

In addition, he said that in his activity, he usually moves between the departments of Caquetá and Huila, mainly, which for them would deny that he had departed from the process together with the group led by 'Iván Márquez' and 'Jesús Santrich'.

The UIA also requested the expulsion of Alberto Cruz Lobo, aka Enrique Marulanda, one of the sons of the late former FARC leader aka Tirofijo. According to the request of the UIA to the Chamber of Amnesty and Pardon of the JEP they appear in the video in which 'Jesus Santrich' speaks of the return of several of the ex-combatants to the underground and the return of arms.

The identity of the woman was achieved, says the UIA, on account of advanced inquiries with the Police Dijin. It would be a morphological analysis of the images. However, the National Police Director, General Óscar Atehortúa, said that the participation of 'Sonia' in the video "is being verified" and that "the technical procedures will define whether or not it is her".

However, it is also verified if 'Sonia' was, less than a month ago, in a meeting with the High Councilor for Stabilization, Emilio Archila, in Huila.

The Farc party analyzes asking for corrections on these statements, because in addition to the request to exclude 'Sonia' from the JEP, they claim that in the past two other ex-combatants had been indicated to appear in the rearmament video, and that none Both cases proved true: aka Rafael Gutiérrez and Albeiro Córdoba.

There are already nine requests for exclusion made by the JEP on people who appear in the video with 'Santrich' and 'Iván Márquez'. This does not imply an immediate expulsion, since the appearing parties have the right to defend themselves. That is, in this case, 'Sonia' can appear before the JEP to defend and prove that it remains committed to reinstatement. And the JEP, meanwhile, would enter to evaluate the evidence presented by the UIA and any additional elements.

“The interinstitutional work led by the group of prosecutors of the Unit designated for this task, allows us to deliver this new result and comply with the legal mandate granted to the UIA regarding the request for non-compliance incidents against those who have missed the commitments acquired when accessing the Special Jurisdiction for Peace, ”said UIA director Giovanni Álvarez Santoyo.