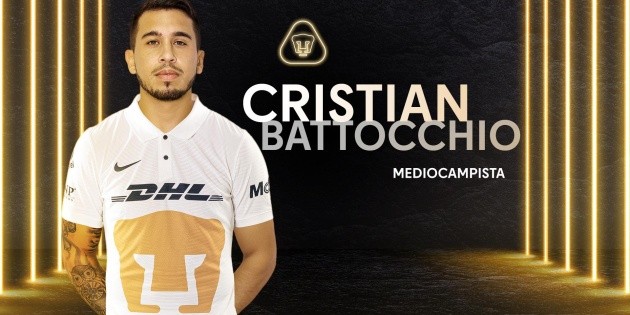 So far, Pumas UNAM had announced five reinforcements for the squad led by Andrés Lillini in front of the 2021 Guard1anes Apertura Tournament of the MX League. They were: Higor Meritão, José Rogério, Washington Corozo, Efraín Velarde and Octavio Paz. And now, to the surprise of locals and strangers, he added a new addition to his ranks: Cristian Battocchio.

“Cristian Battocchio will travel to Mexico City in the next few days with a view to joining Pumas”, can be read in the posting of the verified account of the National University Club, regarding the 29-year-old midfielder born in Rosario, Argentina.

Where did Cristian Battocchio play?

Cristian Battochio, new reinforcement of Pumas UNAM for the 2021 Guard1anes Apertura Tournament of the MX League, trained at Newell’s Old Boys in Rosario and before playing first class, he was transferred to Udinese in Serie A del Calcio, where he reached integrating the first squad as of August 2012. That year, in addition, due to his dual citizenship, he accumulated 18 matches with the Under-21 National Team of Italy.

It then went on loan to Watford in England in mid-2013. The English cast kept the pass and gave it in 2014 to Virtus Entella of the third division of Italy. Then, in 2015 he was transferred to Stade Brestois in Ligue 1 in France, in 2017 he ended up at Maccabi Tel Aviv in Israel, and his last experience was in Tokushima Vortis in the J1 League in Japan.

In the first half of 2021, Cristian Battocchio, according to Transfermarkt, played 14 matches between matches of the J1 League, J1 League Cup and Emperor Cup. You can project both as a central midfielder and as a midfielder on the wings.