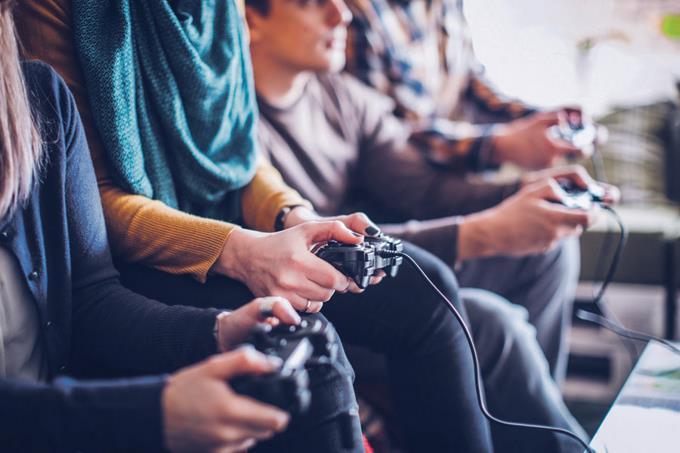 "Let's play or not, we are in a society where the game has transformed everything," said Eurídice Cabañes in the presentation of the exhibition 'Videogames. The two sides of the screen ', of the Telefónica Foundation, of which she is a curator, who takes a tour of the influence and impact that video games have on society.

The first contact we have with technology when we are children are video games.

"It's the middle of our century," Apostles Cabañes. And this is demonstrated by the latest data from the Spanish Association of Video Games (AEVI), which reveal 80 percent of children between 6 and 10 are players, almost the same percentage (78%) in the case of adolescents in between 11 and 14 years. Both age groups account for 19 percent of the players in the country (16.8 million).

These data are of particular concern to parents who fear that their children develop an addiction to video games and that they lock themselves up instead of going out to play in the street with their friends.

Although a study by the Radboud Nijmegen University in the Netherlands denied the latter by revealing that more than 70 percent of the players preferred to play with friends, video game addiction is already a reality.

The World Health Organization (WHO) said last May that the use of addictive video games is considered a disorder. Thus, those who have "a pattern of persistent or recurring game behavior that can be online or offline" suffer, according to the description of the International Statistical Classification of Diseases and Related Health Problems (ICD).

The symptoms are manifested, according to their definition, by the "deterioration in control over the game", the "increased priority given to the game", which comes before "other interests and activities of daily life", and "continuation or increase of the game even though it has negative consequences".

Despite this, recent neurological studies have shown that playing video games continuously, without reaching addiction, improves the cognitive abilities of the brain.

Until now, studies such as that of the Texas A&M International University have indicated that they improved visual attention and memory, but it has also been shown that they can improve cognitive flexibility and decision speed.

Cognitive flexibility is the ability to switch between several tasks and adapt to each of them, as well as to think simultaneously on several concepts.

This allows us to adapt our behavior to the situations we face each day to arrive at the best solution. It affects some children with learning and attention issues.

A study by Queen Mary University in London and University College London (UCL) in 2013 showed that "certain types of video games can help train the brain to become more agile and improve strategic thinking," say its scientists

These are real-time strategy games, such as Starcraft. For the study, they had volunteers who played this game for 40 hours in six or eight weeks, and the Sims who, on the contrary, do not require as much memory or tactics.

Thus, it was concluded that those who play this type of games continuously will be faster and more precise when completing tasks that require cognitive flexibility.

Following this idea, some of the current video games that could contribute to the improvement of this capacity are WarParty, a real-time strategy game set in the stone age, which was released on Steam in March 2019.

In it, the player has to build a base, recruit and control a group of soldiers and fight dinosaurs.

It is also the case of Conan: Unconquered, also launched in 2019 on Steam, where the player has to get into the skin of Conan, the Barbarian so that their lands are not conquered.

One of the people in charge of the study, Brian Glass, points out that if it is discovered that these contributions are maintained over time and their causes, it could contribute in the cure to problems of attention deficit of children such as hyperactivity or even traumatic brain injuries .

"The hippocampus is critical for healthy cognitive faculties," they say in the study. Despite this, they point out that they only detected this reduction in players who used non-spatial memory strategies. If, on the contrary, they make use of spatial strategies dependent on the hippocampus, the effect is totally the opposite: the gray matter of the hippocampus increases, improving the visospatial, auditory and motor abilities of the individual.

VIDEO GAMES AS A REFLECTION OF THE COMPANY

On the other hand, video games are also a reflection, increasingly faithful, of society, and are currently introducing new themes and include characters that represent groups that were previously marginalized in the sector, which had no representation in video games .

This is the case of gay people who already appear in video games such as The Last of US, which has a lesbian protagonist, Ellie, and that shows, in fact, a kiss on the screen of her and her partner}.

The same goes for Borderlands 2, which identifies the character of Axton as bisexual. Or the case of League of Legends, where the character of Varus, or the body in which his soul got, turns out to be a fusion of two men in love with each other.

This has also affected the 'eSports' (video game competitions), which now also include people with functional diversity. In fact, there are organizations such as Different Games Collective that were born with the objective of raising awareness about the inclusion of new groups in the video game, regardless of their sex, race, culture, age, sexual condition.

Another aspect that has evolved has been that of gender stereotypes. In 2018, men represented 58 percent of players in Spain (compared to 41% of women).

The primacy of the male audience is reflected in the way in which the characters are presented, also the female ones: it shows, for example, warriors with little armor or adventurers with female attributes with unnatural proportions, such as Lara Croft in Tomb Raider or Ivy Valentine in SoulCalibur. In addition, 97 percent of women who appear in video games are Caucasian, according to data shared by Cabañes.

Despite this, the curator highlights that in the most current games there are already female characters that appear with more realistic appearances, such as Lara Croft herself in the latest adventures you launch, or something earlier, Mona Sax of the game Max Payne.

In short, video games are presented as another social agent; Through their characters, stories or gameplay they have a positive and negative impact on their users. That is why, they are adapting to all social changes to be a reflection as faithful as possible to the present.