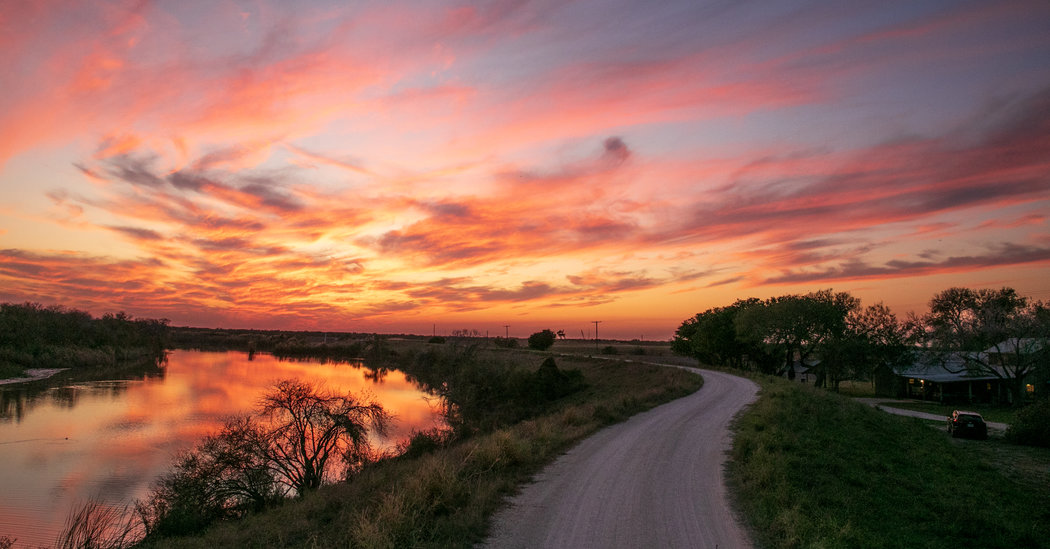 PROGRESS, Texas – Two days after giving the federal government his signature, Richard Drawe stopped with his wife and mother on a dike that his family has owned for almost a century, to appreciate cranes and pink spatulas.

A border wall that agreed to reluctantly place on its land will soon separate this Texan family from all that landscape: the dike, a lake, an onion field and all those birds.

Drawe, 69, doubts that the wall will do much to stop illegal immigration, and although he supports the president who ordered it, he believes that construction will "ruin" his life. However, Drawe reasons that selling the land at once was a preferable — and more economical — option to face the government in court, only to end up losing land anyway. The wall, the lights and the roads are going to be built on about 4.8 hectares that his grandfather bought in the 20s, and they will take away the invaluable views of the Rio Grande that he treasures so much.

"We finally give up," he says. “If they had offered me a million dollars to build the wall, I would have rejected it if I had had the certainty that they would not build it. I do not want the money. My life is here. "

The White House expects more homeowners along the border to make the same decision and help President Donald Trump fulfill his campaign promise to build 724 kilometers of new border wall by 2021.

The list of challenges that Trump's “big and beautiful” wall still faces includes an investigation into construction contracts, financing delays and a recent legal decision to block emergency access to Defense Department funds to build it. The national court order has restricted, for now, the construction of the wall at 281 kilometers in Laredo and El Paso, Texas; in Yuma, Arizona, and in El Centro, California.

But access to private land such as Drawe's can be the biggest obstacle between the president and his wall.

The government has only built 150 kilometers of new wall, mostly in federal territory where there were already deteriorated barriers or for vehicles, according to the Office of Customs and Border Protection. The final route of the border wall has not yet been established, but 260 kilometers of that route will pass through South Texas, where 230 of those kilometers are privately owned, according to data from the border agency. The Trump administration has bought only 4.8 kilometers since 2017.

Mark Morgan, interim commissioner of the Office of Customs and Border Protection, expressed doubts about being able to finish before the government deadline.

"Right now it is difficult to say if we are going to be able to meet that goal," Morgan said about finishing the construction of the wall by 2021. "But I trust we will be close to achieving it."

Throughout Trump's first term, the White House has pressured the Department of Homeland Security to accelerate the construction of the wall, an initiative that has recently been led by Jared Kushner, the president's son-in-law. As the sense of urgency has grown, Trump – who is well aware of the powers of forced expropriation – has suggested in some meetings to "take the land" from private owners.

The law is on the side of the government. Leading academics and specialized lawyers said in interviews that border owners have few options once they receive a request from the government.

Owners can voluntarily allow authorities to access and inspect their land and, if officials decide they want it, accept the government's offer. Or they can go to court to fight for greater compensation.

But according to this law, the government can start construction even before the owners receive full payment.

By using the powers for forced expropriation, federal lawyers can argue in court that the construction of the wall is an emergency, which almost always results in the court granting the government material possession of the land, according to Efrén Olivares , a lawyer for the Texas Civil Rights Project. The government can then start building, even while the owners continue to litigate for years to get full payment.

"It's like accepting to sell your house, but with a fixed pre-established price," says Olivares.

The United States initiated more than 300 cases against landowners for their land after President George W. Bush signed a law to begin the installation of a fence along the border in 2006, according to the Texas Civil Rights Project . Only 46 of those cases remain open. The government made an arrangement to acquire the lands of most of the other owners, and part of that fence will now become a more consistent wall. According to Department of Justice officials, many owners voluntarily let the government access their land.

The Trump administration has resumed the action where the Bush administration stayed and has filed 48 lawsuits to inspect and start work on other plots.

"They are going to get the land for their wall, whether they negotiate with them in advance or that they file a lawsuit and take them through a declaration of appropriation," says Roy Brandys, a lawyer specializing in expropriations that represented Drawe.

The sadness is greater when you know where the wall will really be. Construction is not on the border, which runs along the Rio Grande. It will be done much more inside the American side. Drawe will lose easy access to the land located between the wall and the river, about 141 of its 212 hectares. According to Drawe, the government has pledged to pay around $ 42,000 for the 5 hectares where it will be built and about $ 197,000 in compensation for reducing the value of its farm. It is assumed that some doors south of the wall will allow access to your property.

Drawe believes that all this will not help much. He claims to have found drug packages on his farm in the past, and fears that the cartel members Trump cites as the reason for the construction take control of the entire territory south of the wall.

"If the wall is raised," says Drawe, "that will be the new frontier."

Becky Jones is getting ready to fight. The government recently sent Jones, 69, and his family a letter informing them that they were preparing to take them to trial if they did not allow officials to inspect their agricultural fields for the construction of the border wall.

For Jones, construction undermines what is said in the 2019 Congressional Budget Act, which states that the land within the Santa Ana National Wildlife Refuge, adjacent to its property, would be exempt from the wall. Jones says that the construction that will be carried out on the road along the shelter will harm the wildlife he grew up admiring.

"Forget the deplorable Americans," says Jones. "You'll be a disposable American if you're on the south side of the wall."

Jones and Drawe say they support the Office of Customs and Border Protection and border security, but they would like the government to focus on modifying the nation's immigration laws, hiring more agents and investing in technology to monitor the border instead of building a useless wall.

To prove the point, Drawe showed a wooden staircase that, according to him, was abandoned by immigrants on their land, near an old border wall sector. Earlier this month, a video of an immigrant who used a similar ladder to climb the newly built wall and enter El Centro, California, went viral.

The Customs and Border Protection Office says the video shows that the wall is working as planned: it slowed the immigrant enough for agents to detain the 16-year-old Mexican teenager.

Similarly, border patrol officers said they were not worried about the possibility of immigrants using power tools to cross the wall. Despite Trump's boasting of a “virtually impenetrable” barrier, officials at the Customs and Border Protection Office know very well that it is inevitable that they will find a way to drill it and they have already prepared a budget for repairs to an infrastructure fund of 107 million dollars.

“When we see that this country is in the crisis it is in, we need to take measures that may not be well received by everyone,” says Carmen Qualia, deputy head of the Border Patrol of the Rio Bravo Valley sector. "Our responsibility has not changed."

In fact, the reality on the border has changed since Trump declared a national emergency.

His government has severely limited the US asylum program and forced more than 55,000 migrants to wait in Mexico while their cases are resolved. It has signed agreements to return families to Central America and limited the number of families that are released to the public with citations to return to an immigration court.

Such policies and a colder climate have caused border detentions to decrease by more than 70 percent since May – when the highest peak of crossings was reached – to 42,649 in November. And the population of detainees has gone from being Central American families to Mexicans, who are easier to deport.

And although last spring many of the migrant families surrendered to agents to request asylum, border agents said they were preparing for people to take a more dangerous route to the United States as a result of Trump's strict policies.

In the last three months, officers have found migrants hiding in a tractor unit in Texas and others inside furniture and washing machines in San Diego.

An unfinished tunnel of almost ten meters in the direction of Mexico was found in Nogales, Arizona. ICE found almost a kilo of heroin in another tunnel in the city in recent days. In May, Customs and Border Protection intercepted methamphetamines and fentanyl worth $ 500,000 in an ultralight remote-controlled airplane in Tucson.

"It is a case as if the wall were obsolete at that point," said Michael Maldonado, the 30-year-old son of Pamela Rivas, an owner who has been fighting in the courts against the government for 11 years.

The federal government took Rivas to court in 2008 to acquire portions of its land, which surrounds the border port of Los Ebanos, Texas. Rivas refused to accept a payment in the hope that his intransigence would delay government plans.

The government has not started building on its property yet, but it has secured a part of it, which means that the project can start at any time, according to his lawyer, Olivares.

Border Patrol agents regularly pass through the dusty area in front of the rickety cabin of the Riva family, which used to be a souvenir shop. The land has been in the hands of the family since 1890 and so far they have survived the efforts of two president.

"The longer we can resist, maybe something changes," Maldonado said. "Maybe a new government arrives and says‘ You know, we are not going to deal with this. "