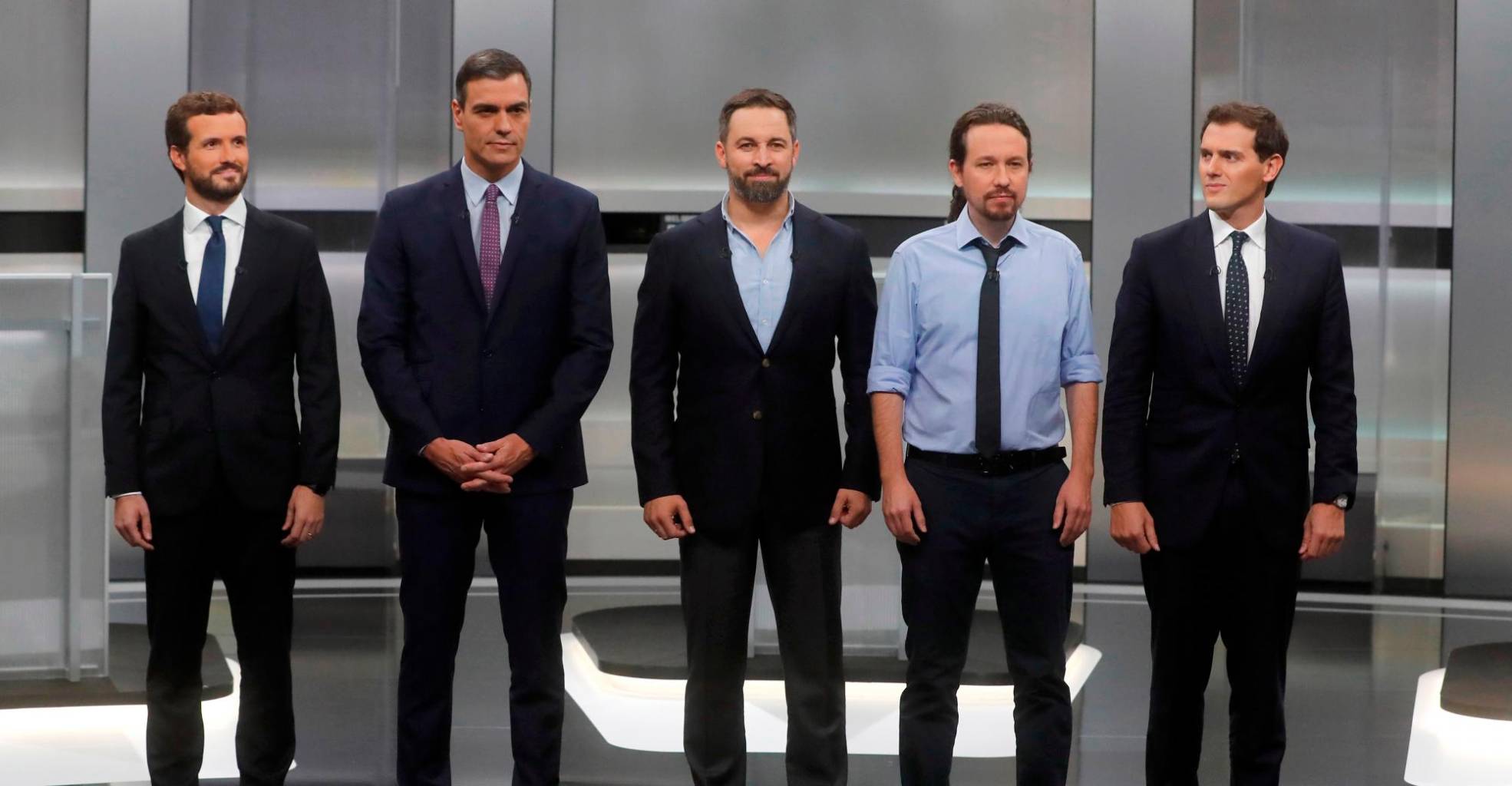 The aspirants to preside over the Government of Spain as of next Sunday maintained an intense televised debate on Monday, in which the 'all against all' became the main argument to start the vote of the undecided.

The debate, the only one of this atypical and short electoral campaign, faced the socialist leader and acting president of the Spanish Executive, Pedro Sánchez, the conservative Pablo Casado (PP), the liberal Albert Rivera (Citizens), and the leftist Pablo Iglesias ( United We can).

On this occasion, for the first time, the leader of Vox ultra-right training, Santiago Abascal, also participated.

The appointment was expected tense at this time of high uncertainty about the outcome of the November 10 elections.

The latest polls published today, on the deadline set by the electoral law, speak of a technical tie between the left and right blocs, but neither would reach the bar of the 176 seats set by the absolute majority.

That is why the debate went from less to more and sought to scratch votes even within the blocs themselves, with discussions that showed the confrontation between the Popular Party and Citizens for the vote of the right center, or between the Socialist Party (PSOE) and United We can for the one on the left.

Catalonia, the center of the discussion

Of the five blocks in which the debate was divided – economic policy, social policies and equality, democratic quality and international politics – that of social cohesion, and therefore Catalonia, was one of the most debated.

While the acting government president, Pedro Sánchez, asked to 'increase the spaces for dialogue' to address this issue, the conservative Pablo Casado, accused him of not applying the law in Catalonia and warned him that he will hold him accountable if the Catalans do not You can vote in freedom next Sunday.

Casado, who asked Sanchez up to five times if he considered Catalonia to be a nation, also lashed out at the leader of Citizens, Albert Rivera, who came to ask him to "make no mistake of adversary."

Rivera demanded Sánchez to guarantee the holding of 'clean and free' elections and once again demanded the application of article 155 of the Constitution for the intervention of autonomy in Catalonia.

For the candidate of Unidos Podemos, Pablo Iglesias, all candidates 'know that Catalonia can only be resolved with dialogue, common sense and left hand'.

From Vox, the solution passes, according to Santiago Abascal, through measures such as the suspension of autonomy in Catalonia or the detention of the Catalan regional president, the independence quim Torra.

At the beginning of this first discussion block, Sanchez promised to promote a reform of the Criminal Code to ban illegal referendums, among other measures.

No apparent pacts or exit to the blockade

The shadow of a new political blockade after the elections planned throughout the debate.

All the participants, except the ultra rightist Abascal, were willing to collaborate, if necessary, for the formation of a stable government this time, although no one specified with what type of pacts.

In that sense, Sanchez asked that if a new blockade takes place from day 10 "the most voted list is allowed to govern," although he was confident that he could get a majority to form a "strong and stable" Executive.

The gap opened during the last legislature between the PSOE and Unidos Podemos was evident in the exchange of reproaches between its two top leaders.

Iglesias showed his certainty that the next government will be a coalition and reminded the acting Spanish president of the importance of that government being leftist.

'The right argues a lot between them, but then they don't take long to agree. Let's see if we rule together, 'Iglesias told Sánchez.

"If Mr. Iglesias is not in the government, he will never accept a government without Mr. Iglesias," Sanchez replied, reminding him of the differences that made an Executive impossible and forced to call new elections.

The socialist leader also did not clear if, if necessary, he will again agree with the Catalan independentists, despite the fact that this was one of the most repeated issues by the conservative Casado and the liberal Rivera.

Vote or not vote

The last batch of polls indicates that these elections, the fourth in four years, will increase abstention, in line with the 30 percent decrease in the request for a vote by mail.

The forecasts place the participation between 70 and 72 percent, when in April it was 75.7 percent.

According to the survey prepared by the state agency CIS, after the television debate held in April, 7% of the voters changed their minds.

The doubts will be cleared in a week.